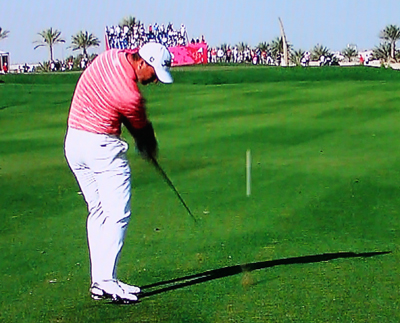 Jaypee Greens is the first Greg Norman Signature golf course in India and can be stretched to an imposing 7,347 yards from the Championship tees. Each loop of nine is made up of 2 Par 5s, 5 Par 4s and 2 Par 3s.

Greg Norman was given a very flat piece of land to work with and from this he has created a subtly undulating course using the earth that was removed when creating the lakes that meander through the course. In fact there are 14 lakes, 88 bunkers and 5 different teeing options here.

The gently rolling fairways use an imported Evergeen Bermuda grass and the greens use Tifdwarf Bermuda grass giving them a firm and fast playing surface. The bunkering used here is based on Greg Normans homeland and are reminiscent of classic Melbourne sandbelt courses which include Royal Melbourne and Kingston Heath. deep, with steep sand faces and cut edges.

The bunkering offers a visually striking appeal but are located to provide strategy and reward the thinking golfer. Apart from bunkering, the other hazards of the course include some of the lakes, which at times cross the line of play. The course landscaping includes considerable planting of open and closed woodlands, shrublands, wetlands and wild-grassed areas.

Thongchai Jaidee 22/1 has had three Top-10 finishes from his last four European Tour outings. He went out at the first round stage of the WGC  Match Play Championship losing an epic battle with Sergio Garcia on the second extra hole. Thongchai has five European Tour victories and I think he could be adding his sixth here this week.

Two Top-5 finishes in his last two European Tour events see Chilean Felipe Aguilar 25/1 come into this week in great form. In fact Felipe has only been outside the Top-20 once in his last six European tour events. Felipe’s only European Tour win was back in 2008 at the Indonesia Open, I don’t think it is going to be long before he adds to that tally if he keeps this form up.

Ricardo Santos 22/1 has been in such good form this year its hard to look past the Portuguese player, the only thing he hasn’t achieved yet is that second European Tour victory. Richardo has only been outside the Top-10 once in his last five European tournaments and that was still a Top-25 finish, two of those were Top-5 finishes at the Joburg Open and the Abu Dhabi HSBC Championship, so look for Ricardo to be in the mix again come Sunday.

We did tip Golf Monthly playing editor David Howell 50/1 at the Tshwane Open, where he had another Top-10 finish, but it could have been a lot better but for a final round 71, which see him slip back down the leaderboard. As stated then David has only been outside the Tope-25 once in his last five European Tour starts, which shows great consistency. It’s just nailing a good final round to go with the rest of his good work.

Another player we have tipped a couple of times this season so far has been Lorenzo Gagli 40/1. The Italian had another Top-20 finish at the Africa Open making that five Top-25 finishes in his last six European Tour events. The lad from Florence is still waiting for his maiden victory on the European Tour, but he is showing great consistency so far this year and he could be in the thick of it again here come Sunday.

As the saying goes horses for courses or in this case tournaments so it would be remiss of me to leave our SSP Chowrasia 125/1 who has won this event twice in the last four years its been played. This will be the first time it will be played at Jaypee Greens, but SSP obviously enjoys playing in front of a home crowed and will make an interesting bet at these odds.

For updated betting odds during the tournament visit planetgolfreview.com