Goooood moooorrning, Death Valley! The local time here in the west is 5:30 am on the summer solstice, the sun is about to beam its first rays on California’s Panamint Mountains and the current temperature is already a sweltering 94 degrees….and rising rapidly!

Forget heating up a morning beverage inside my room at the Ranch at Furnace Creek. I was on a dawn-to-dusk golf mission and considering the thermometer climaxed at a sizzling 125° the previous afternoon when I drove, with disabled air-conditioning, into this desert inferno, I wasted zero time slipping into the most minimally acceptable attire and darted over to the adjacent Furnace Creek Golf Course. 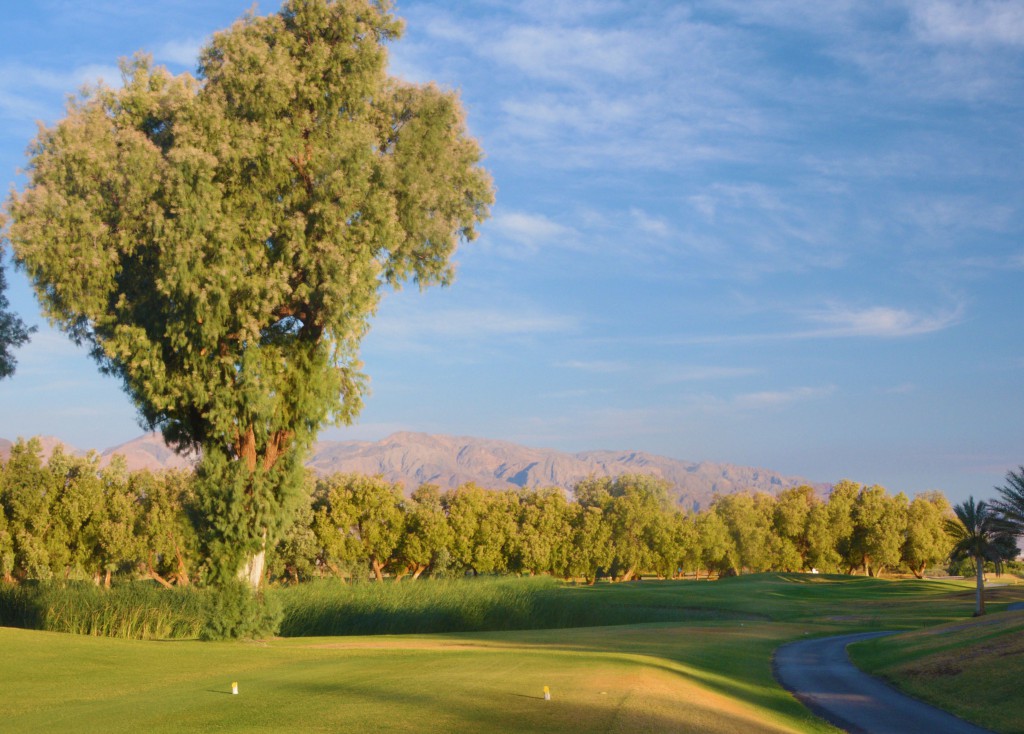 Many of my golf getaways transport me to play bucket-list courses only to generate a suddenly long list of friends eager to be my caddie. But when word leaked of an upcoming exploit I was preparing to embark, that lineup of jealous buddies dwindled swiftly. In fact, most reacted with cocked eyebrows and jaws dropped to the tune of, “do you have some sort of death wish?”

The quick answer was “no” but my adventurous alter ego seeking out-of-the-box golf experiences had other ideas and this time, I looked no further than my home state of California, and, thanks to Mother Nature’s creations, is one of the most diverse geographical environments on the planet with mountains, valleys, forests, coastline and desert. With these dramatic landscapes providing a backdrop for more than 1,000 golf courses throughout around the Golden State there are two that not only take advantage of the state’s defining characteristics but are also the most contrasting 18-hole experiences imaginable in the world. 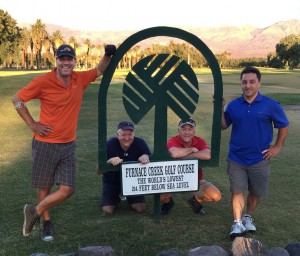 While Furnace Creek GC, approximately 300 miles east of Los Angeles, rests at 214 feet below sea level within Death Valley National Park, its antithesis, Sierra Star GC, is based at an altitude of 8,000 feet at Mammoth Lakes, thereby, constituting the lowest and highest elevated courses in California (Furnace Creek is also the lowest elevated course on earth and automatically rewards golfers with their lowest – of sorts – round ever). After determining the courses were only 200 miles apart, roughly a four-hour drive, the light bulb turned on.

“Think left and think right and think low and think high. Oh, the thinks you can think up if you only try,” Dr. Seuss once proclaimed.

So I did. Why not play both courses on the same day? After all, it’s the longest 24-hour cycle of the year affording plenty of daylight. 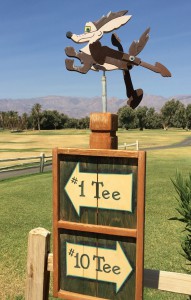 Loaded with multiple jugs of water and in the company of my son, (did I mention it was also Fathers Day?) and two foolhardy friends, we set off on what became recognized as the “Hell to Heaven Golf Challenge.”

By the time we stumbled onto the first tee at 6:30 am, in our quest to be first off the blocks to propel our projected timetable, we found ourselves already needing to advance ahead of the local dawn patrol foursome that included assistant superintendent, Don Forehope (a.k.a., Mayor of Death Valley). Happily obliging, they moved to No. 10 and allowed us honors at the opening hole. Game on. 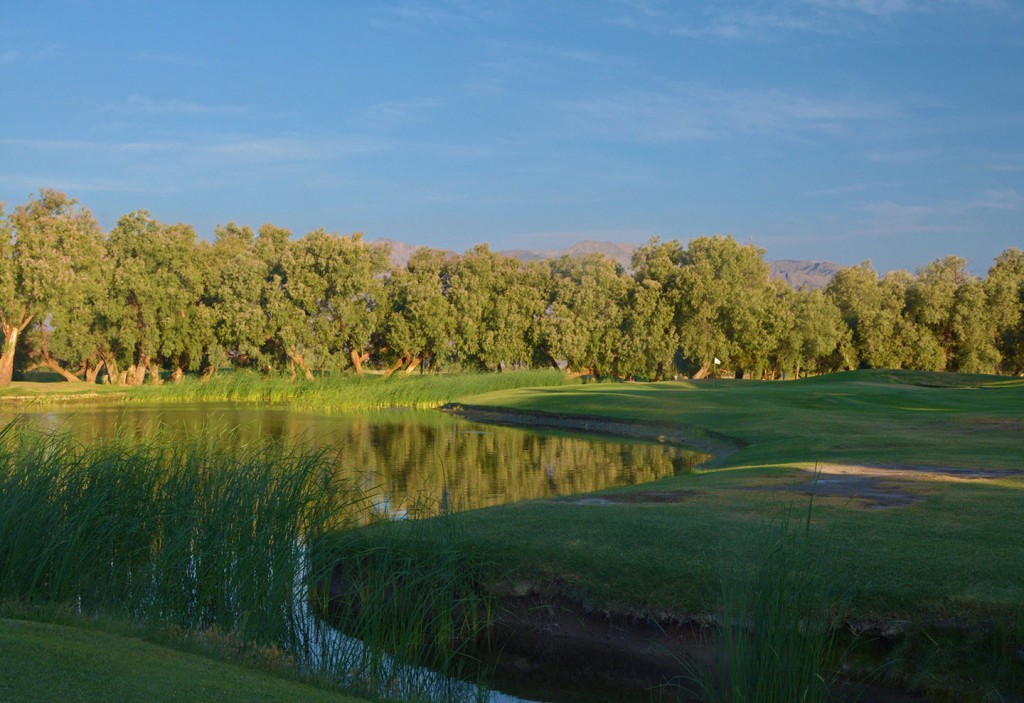 Prior to smacking the inaugural ball, I couldn’t help wondering what sane person would voluntarily spend four hours outside in the lowest, hottest, driest place in the Northern Hemisphere on the first day of summer when the slightest breeze rising from the stark Mojave Desert could blow air hot enough to sear your lungs? The first ominous sign that should have had me thinking twice were the t-shirts in the pro shop emblazoned with a human skeleton hitting a golf ball. 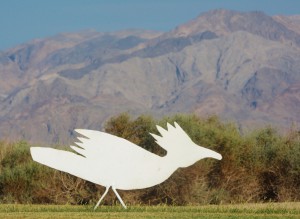 Nevertheless, for us four irrational city slickers, it was just another day on the links with the main objective, aside from staying hydrated, not to shoot a total score matching the temperature. Although, right out of the gate, my offspring seemed headed that direction with his first thunderous drive soaring an unintentional 50 yards to demonstrate how the ball doesn’t travel as far in negative elevation where the air is saturated and dense, posing more friction on the ball and forcing it down as soon as it apexes. Depending on one’s customary ball flight distance at sea level, count on hitting at least one extra club.

There are a multitude of wondrous phenomena’s throughout Death Valley’s 3,000 square miles making it a land of raw beauty that’s been folded, twisted, uplifted, re-formed and buried by powerful geological forces over millions of years. It is also the last place visitors would expect to find a golf course, let alone understand how one could survive in such an ill-suited environment. But these desert fairways have been attracting golfers since 1927, when date palm farmers formed the first three holes. Four years later, that expanded to nine as a way for the workers to stay entertained and it remained that way until 1968, when renowned course architect William F. Bell (Torrey Pines GC) added an additional nine holes. Finally, in 1997, Perry Dye was commissioned for a complete renovation, including a full irrigation system that helped give the course a resort-style quality and with endless water sources to tap into from recycled systems, year-round maintenance is possible.

With preconceived images of parched fairways and greens, players traversing the 6,236-yd, par-70 desert oasis for the first time will be pleasantly surprised by the lush conditions of this certified Audubon Cooperative Sanctuary that is home to several hundred species of migrating birds, plants and coyotes often times seen strolling the fairways. Subtract the heat influence and it’s hard to believe you’re actually playing desert golf.

The front nine provides wide landing areas plus a variety of water features, none of which are a mirage, and after steering the cart up the clackity wooden ramp to the drive-thru full-service bar/restaurant at the turn, the back nine turns up the heat – literally and physically – with plenty of sand, palm and Australian tamarisk trees lining the fairways. The upside is this timber provides inviting shade relief and with the thermostat surging to 110° by the time we teed off on No. 10, they became perfect aiming targets.

Summer rules apply year-round on the fairly flat layout that accommodates roughly 10,000 rounds per year, most September through April, but regardless of the season, Furnace Creek has enough bite to have earned the last spot on Golf Digest’s America’s 50 Toughest Golf Courses. Just don’t get too hot under the collar if you score an 8 on any hole. You’ll be able to brag about making a snowman in the desert!

After sinking my round-ending bogey putt at 10:20 am, the fearless fried foursome scattered to their respective vehicles faster than Wile E. Coyote to start hitting the pavement to higher ground. Unfortunately, we missed the opportunity to squeeze in another round at Death Valley’s other aptly named layout, Devils Golf Course. 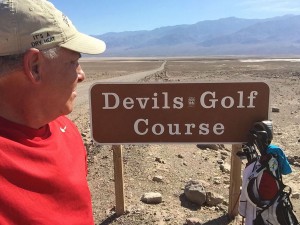 No great loss since this track is void of fairways and greens but rather the remains of Death Valley’s last lake, which disappeared over 2,000 years ago leaving behind a chaotic, crusty vast bed of sculpted salt formations that would make swinging a golf club impossible even for Jordan Spieth.

Motoring along the open-road highways with windows down (remember that air-conditioning situation?), I started feeling the suffocating heat gradually cool with the fast-rising elevation. Within a couple hours, I reached 3,727 ft. at Lone Pine, the first main town along the route to Mammoth Lakes, and was treated to a breathtaking view of Mount Whitney, the highest summit in the contiguous United States at 14,505 ft. From the lowest of lows to a heart-stopping high! 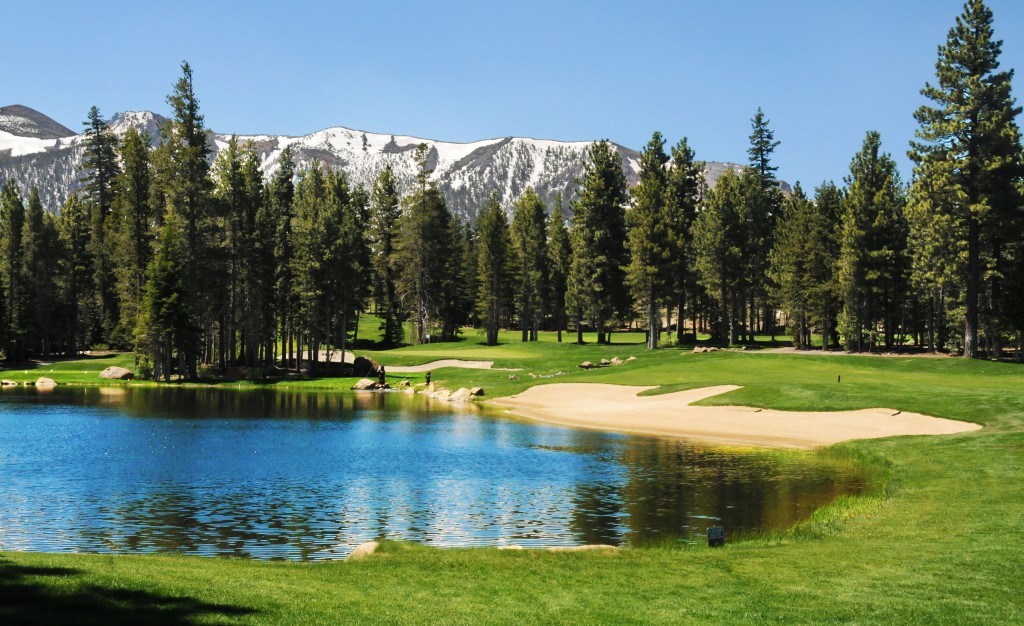 Continuing north on U.S. Route 395 with majestic vistas of the jagged Eastern Sierra, we arrived at the mountain vacation spot of Mammoth Lakes just after 2:00 pm, an hour ahead of schedule and plenty daylight for a second 18. With my body still simmering, the first step out of the car was blissfully welcomed with a deep whiff of fresh air embellished by the resin scent being emitted from the towering Jeffrey pines.

Helloooo Sierra Star GC! It’s a summer-perfect temperature of 80° and all systems are go for the rejuvenated foursome to complete the marathon task. 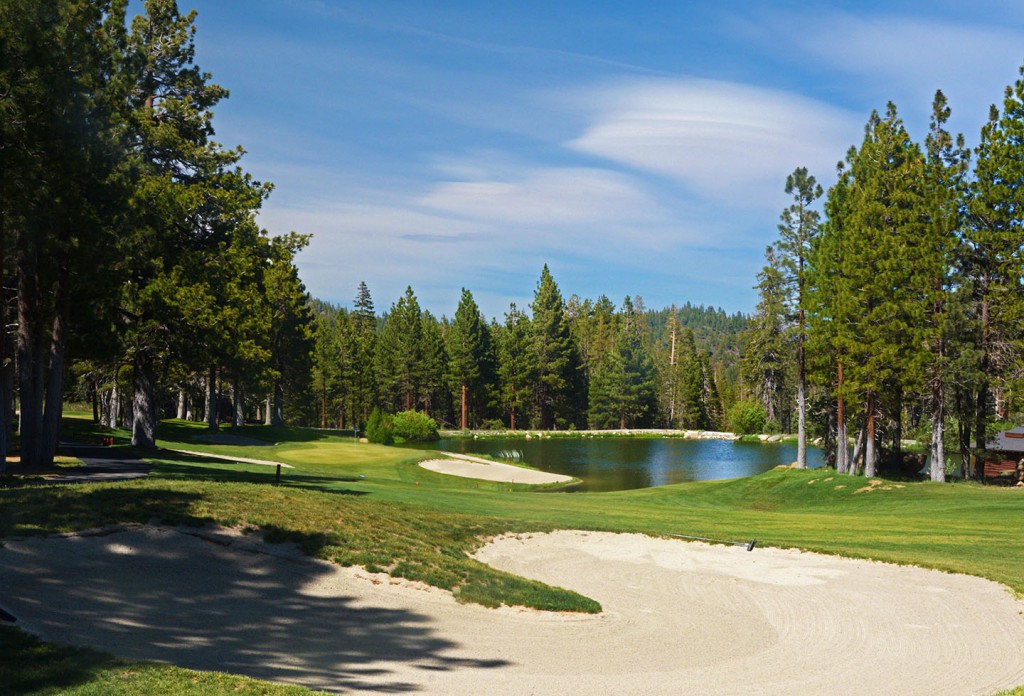 First order of business – a new game plan. With an altitude difference of 8,214 ft. between our morning and afternoon shots, it became necessary to re-strategize club selection due to the reverse effect of ball flight distance. Not a problem for our fragile games!

“It’s awesome for the ego,” says Dave Schacht, Head Professional at Sierra Star GC. “If you flight the ball higher, it stays in the air longer and just kind of floats. If you’re hitting downhill, downwind, down-grain, you really have to pay attention.”

Mammoth Lakes is a California-favorite four season recreational playground with a golf-playing window of only 4-5 months because of the heavy snowpack. But it also means you can partake in a golf/ski combo on the same day certain times of the year. 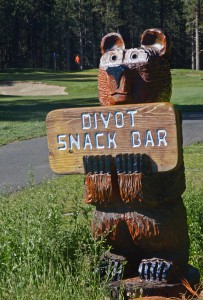 During the golf-playing period, the Cal Olsen-designed (1999) par-70, 6,708-yd. layout near the center of town is a tight track cut through forested terrain so consideration should be given to the narrow fairways when choosing tees. Another important factor – bears! Fortunately, the only ones we confronted were in the form of life-size wooden sculptures positioned at different spots throughout the course.

By the time we reached the home stretch with a few severe dogleg holes trying our patience, we were chomping at the bit to sink that last putt on our day’s 36th hole and belly up to the 19th – or, rather, 37th – hole for celebratory libations. When we finally staggered in, not only did we receive a congratulatory toast from a few locals but also got to sugarcoat our epic adventure by watching a legendary U.S. Open finish.

Let the irrelevant record show I, fittingly, fired my low round, 84, at Furnace Creek GC and my high, 86, at Sierra Star GC. Either way, our invincible foursome was California dreamin’ all day long.