The multi-cultural island of Aruba, only 19 miles from the Venezuelan coast, is not your stereotypical golf destination, but it is nonetheless a happy one that you will likely enjoy. 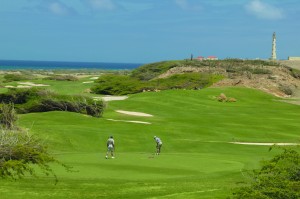 Unlike the rest of the Caribbean, there is a noticeable lack of rich green vegetation, lush jungles or remote wilderness.  And unlike its neighbors, the twenty mile-long island has lacked war or strife to mark its historical evolution.  What you will discover are beautiful beaches dotted with divi and palm trees, colorful desert landscape full of cacti and critters, and stunning rock forms in a climate that varies little year round.  It all makes for a refreshingly unique, but enjoyable golf offering.

Aruba is as much defined by its geography as its history.  Located comfortably out of the way of the hurricanes and tropical storms that tour further to the north, the Spanish were the first visitors to Aruba.  Alonso de Ojeda discovered Aruba in 1499 and claimed it for the Spanish throne, but finding no gold and the island too arid without the fertile soil sufficient to grow lucrative sugar crops, the Spanish soon left. 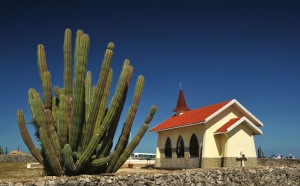 In 1513, the entire Indian population was enslaved and taken to work on the Spanish estates in Hispaniola, now the Dominican Republic and Haiti. At the beginning of the Indian Historic Period in 1515, some Indians returned while others arrived from the mainland and lived in small villages in the northern part of the island. From the 17th century on, the majority of Indians migrated from the South American mainland. Indian preachers were Aruba’s Catholic spiritual leaders well into the 18th century. At the beginning of the 19th century, Indians made up about one-third of the island’s 1700 inhabitants, but in 1862, historians believe that Aruba’s last Indian died.

Aruba’s strategic location was recognized by the Dutch who initially occupied the island in 1636 to protect their salt supply from the mainland and establish a naval base in the Caribbean during their 80-year war with Spain. The Dutch eventually discovered gold there, but never had to fight for the land.  Aruba is now an independent state of the Netherlands and you will find many an educated inhabitant that has also lived and or studied in the Netherlands. 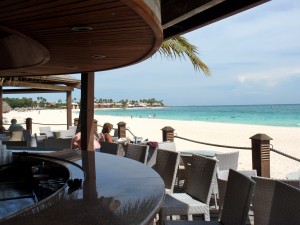 Since 1985, the government has really focused upon tourism as its chief resource making it a very “packaged” island destination – one of the World’s most desired resort destinations.  There has been a five-fold increase in hotel capacity since 1985 most of which I would describe as “3-4 Star” quality.   English along with many other languages are spoken throughout, and the US Dollar is accepted everywhere.  The water is safe to drink and they drive on the left-hand side, as do we in the US.  Though there are a large number of American restaurant chains, one will also discover a variety of different style eateries representing all types of cuisines.  Similarly, while Americans do compose largest group of customers, you will be likely to discover a European or South American next to you at dinner or on the golf course.

As for the golf, Aruba is really not a golf-destination, but rather a destination with enjoyable golf.  The Robert Trent Jones, Jr.-design, Tierra del Sol Resort, Spa & Country Club, is THE Course on Aruba, currently the only 18-hole offering.  It is distinctly a desert course, but one with views of the ocean.  With wide expansive fairways and sweeping vistas, the elevation changes highlight the desert flora and the dramatic ocean vistas, as well as the skyline of the capital town of Oranjestad.  Ever-present breezes make the hot days bearable, and also translate into your golf strategy.  Jones built generously wide fairways, but stray from them and you almost certainly have a lost ball.  The Bermuda putting surfaces are smooth, but grainy meaning that putting with the grain will give you some lightning quick putts, but coming back against it will have you pumping to reach the hole. 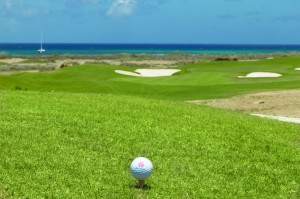 The par-71 course has a nice flow to it with the longer holes typically playing shorter with the prevailing wind and the longer ones much longer against it.  The bunkering is omnipresent and combined with the gently sloping greens make for the greenside challenge.  Provided that you play from the tees that truly fit your game, you will find Tierra del Sol very playable, but far from any pushover for most.  The par-71 rates out at 74.2 and a 132 slope from the tips that measure just over 6,800 yards.  Situated about 15 minutes from most of the activity in the extreme northwest corner of Aruba, Tierra del Sol offers attractive villa locations just a short cart-ride from the beautiful clubhouse area for those wishing to focus upon golf.  Rates depend on the time of the year and range from $112 to $152 US and golf/villa packages are available and high quality modern rental sets are a wise option for those who prefer to travel light.

The Links at Divi Aruba Golf Course is the secondary golf option and a perfect fit for the casual recreational player.  Situated conveniently, this 9-hole little gem is somewhat on the shorter side at 2,952 yards from the tips, but features plenty of bunkers and water, particularly on the par-four island green ninth hole.   The regular rate for 9 holes varies from $75-85 US, which includes a mandatory golf cart. The golf course is part of the Divi Resort system spanning forty years, which is a family of five Aruba resorts complete with a casino.  The golf course is adjacent to two of these resorts and is conveniently situated near the food, nightlife, shopping, and beach making it an easy place to play.  Again quality rental clubs are available. 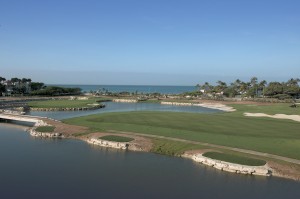 Surrounding Aruba’s interesting desert interior is a beach-lover’s paradise around the island, complete with picture-perfect, powdery white sand beaches and tranquil sapphire waters. With gorgeous year-round weather, it’s always the right time to scuba dive, windsurf, snorkel, horse ride or hike. At night, enjoy casinos and Vegas-style shows. While Aruba displays hints of its Dutch influences (it’s still part of the Netherlands), don’t expect Old World reserve; the draw here is relaxation and fun.  I found a wide mix of ages and energy for Aruba has a good variety to offer. 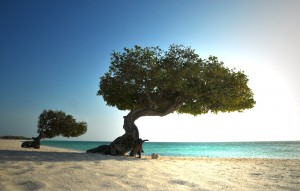 One point that sooner or later comes up with most discussions about Aruba is the disappearance of the young American tourist Natalee Holloway in 2005.  Admittedly Aruba’s reputation suffered temporarily, but this type of situation could have happened on any college campus or town in America, and there have been no other such incidents.  The important thing is that I found the island to be as comfortable as any I’ve encountered with safety never a concern.

Finally, I left the best aspect for last.  Everywhere I found the Aruba people to be smiling and friendly.  While the pace is slow, “Island Time” they call it. The service is fairly good with the people are uniformly friendly.  Indeed they appear happy you have joined them, and you will be happy too should you choose to visit and play golf in Aruba – you will experience “Happy Golf!”

One Response to “Aruba – One Happy Golf Place”