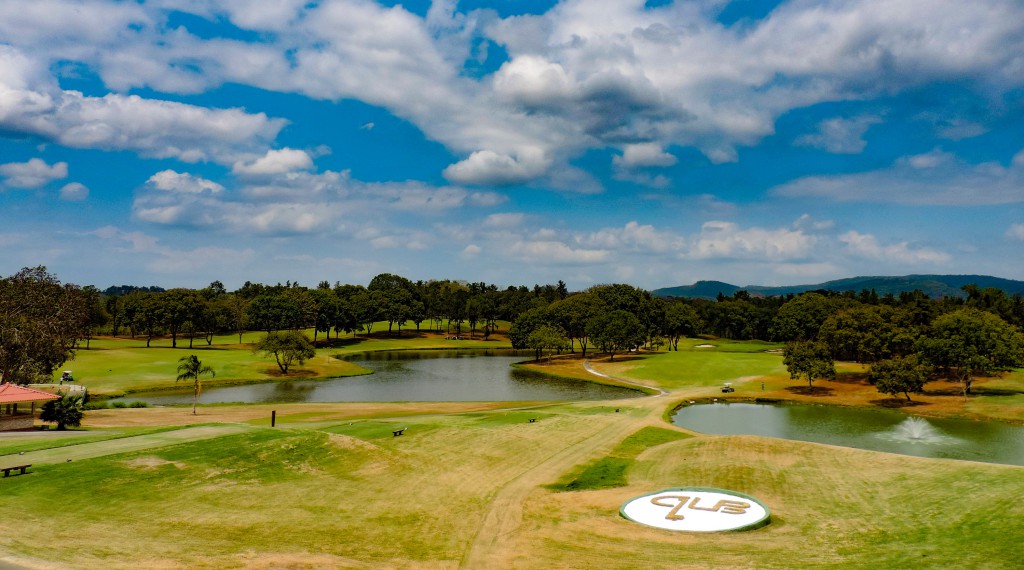 Sipping a cool beverage from the clubhouse or the veranda, it’s hard to improve upon the view of the Club de Golf de Panama. (Photo by Robert S. Fagan)

As my title would suggest, the Club de Golf de Panama holds the preeminent position in Panamanian golf. It’s not the oldest or the fanciest course, but it’s long history, pedigree, and well-regarded private championship layout is widely admired and respected by all. Founded in 1918, but needing more room, they moved to its present 300-acre site in 1977. This current layout has hosted the PGA TOUR’s Web.com Tour and is a fixture for Panama’s local competitions. No less than Arnold Palmer, Sam Snead, and Roberto de Vicenzo were among the illustrious winners at the previous location when it was a PGA Caribbean Tour stop. 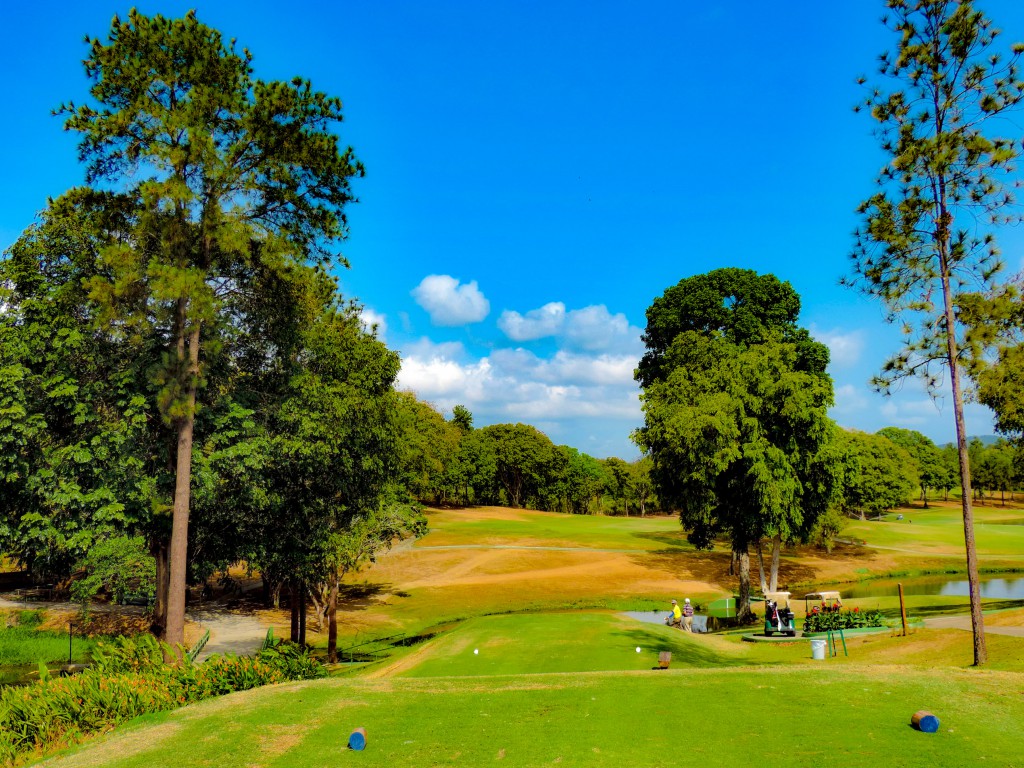 Stepping to the elevated first tee of a hole that extends nearly 600 yards and you know the game is on. You must negotiate the tall treelined corridors and tumbling terrain if you hope to score well as the Club de Golf de Panama.  (Photo by Robert S. Fagan) 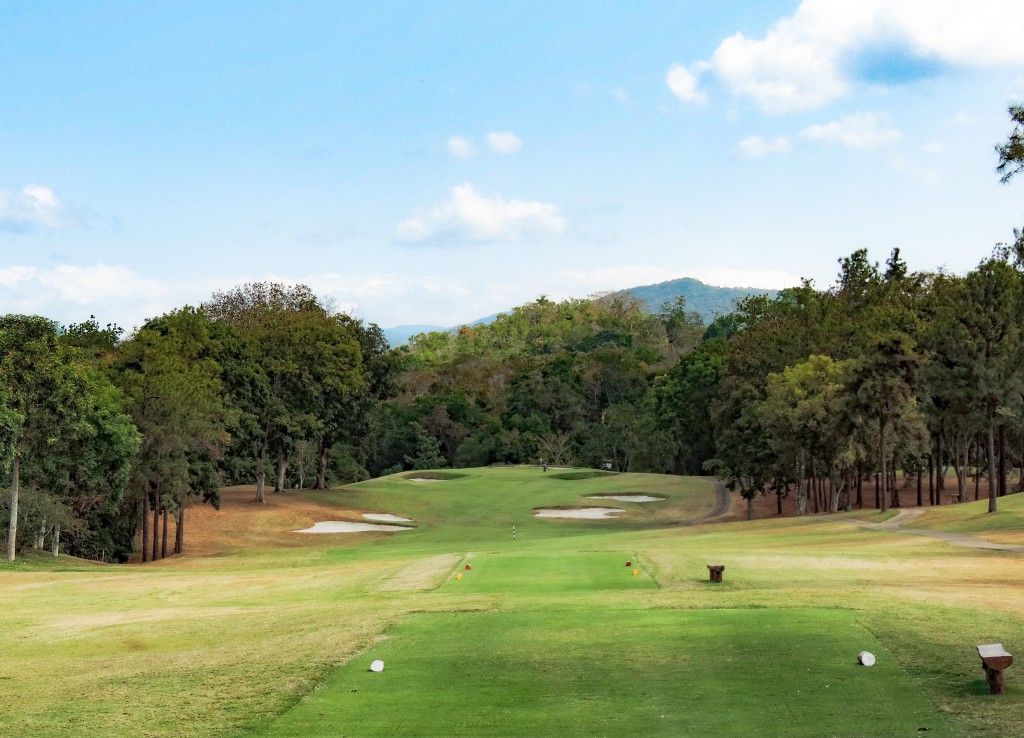 Here from its elevated tee is a view of the current #4 hole. The shortest par-four, it is also downhill, but narrow.  (Photo by Robert S. Fagan) 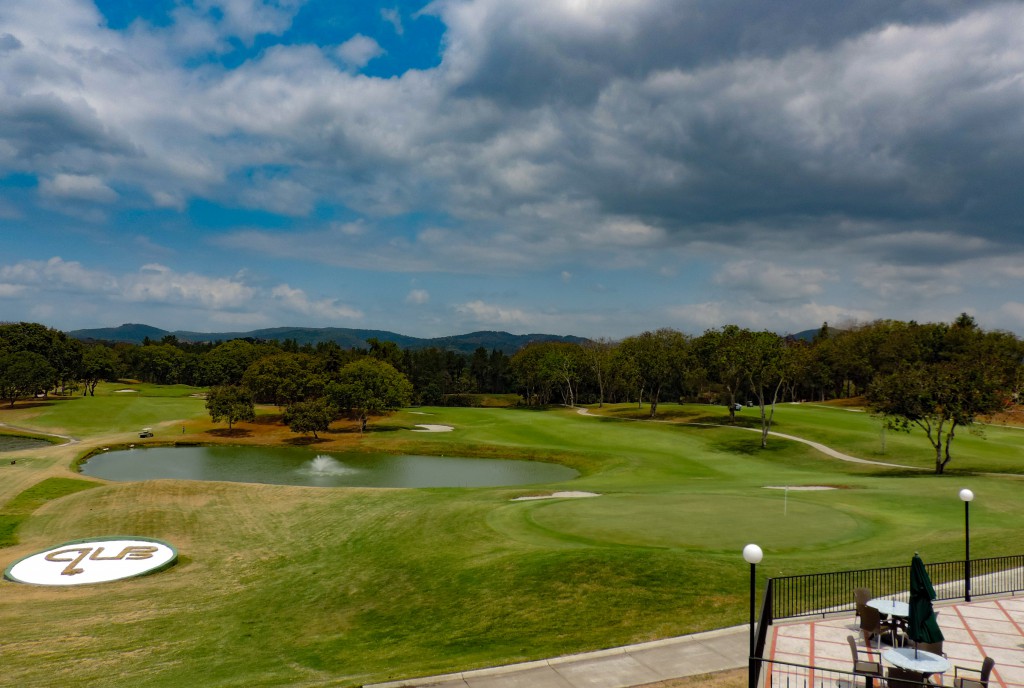 Another view from the clubhouse highlighting the 465-yard par-four 7th green.  (Photo by Robert S. Fagan)

Fashioned as a traditional parkland style golf course, recently all of its putting surfaces have been renovated. That together with frame of over 7,000 yard from the tips, its relatively narrow tree-lined fairways, tumbling terrain that weaves between the trees, and relatively small putting surfaces make for a classic challenge. I was immediately impressed by the similarity to the Carolina sandhills. With no housing intruding and only a minimum on its borders, its core routing truly makes for an enjoyable “walk in the park!” With its rolling corridors, your tee ball had had better find the fairway if you hope to score here and hitting the greens in regulation makes your task so much more doable. 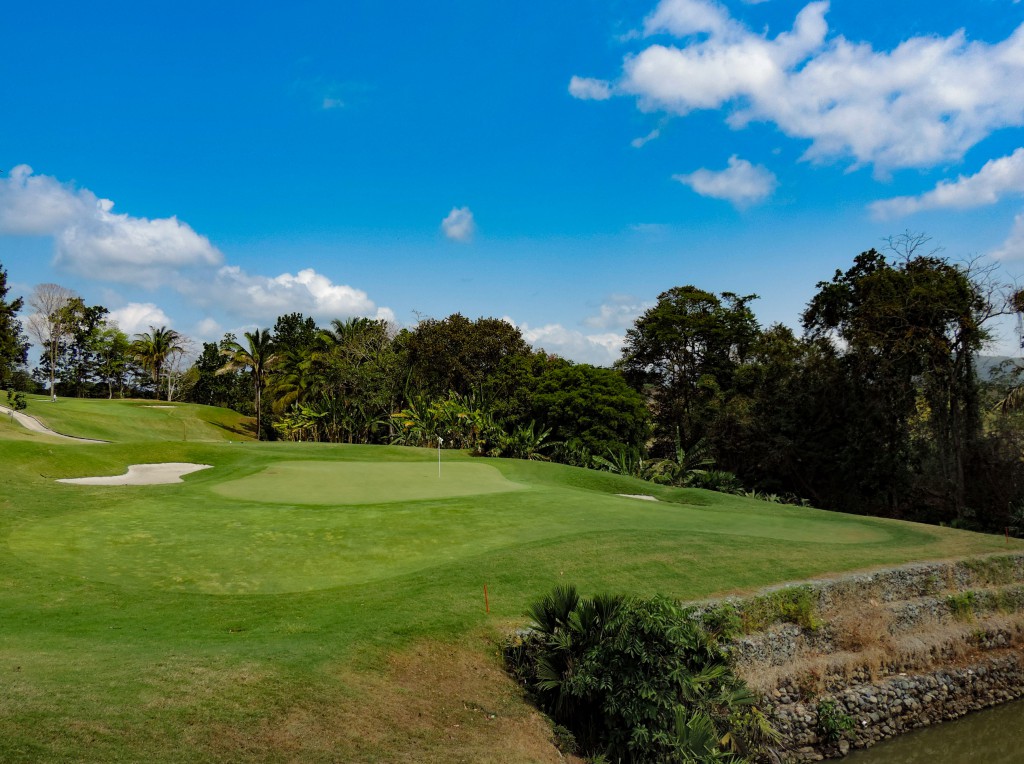 Water, jungle, and elevations changes along with relatively small greens all await any errors.  (Photo by Robert S. Fagan)

I hesitate to describe holes, especially as the order of them at the Club de Golf de Panama has shifted several times recently, but the 453-yard hole that finished directly in front of the clubhouse is quite memorable. Listed as a par-five, for the skilled player it can play as little as a reasonable par-4, a beastly one into a breeze, or a relatively docile par-five. In other words, it’s a great par-4 1/2. In the Cape Hole fashion, should you dare, you can bite off a bit of the lake to the left to hit the firm slightly sloped fairway lined by trees to the right. Water intrudes to the very entrance of the green positioned below the clubhouse with four bunkers to the rear and sides. There are no run-up shots. Unless you’re on your game and you have found the fairway with a long drive, I suggest the conservative 3-shot ploy. Anyway, its not only a beautiful hole, but a thought-provoking one as well – one of the Panama’s best! 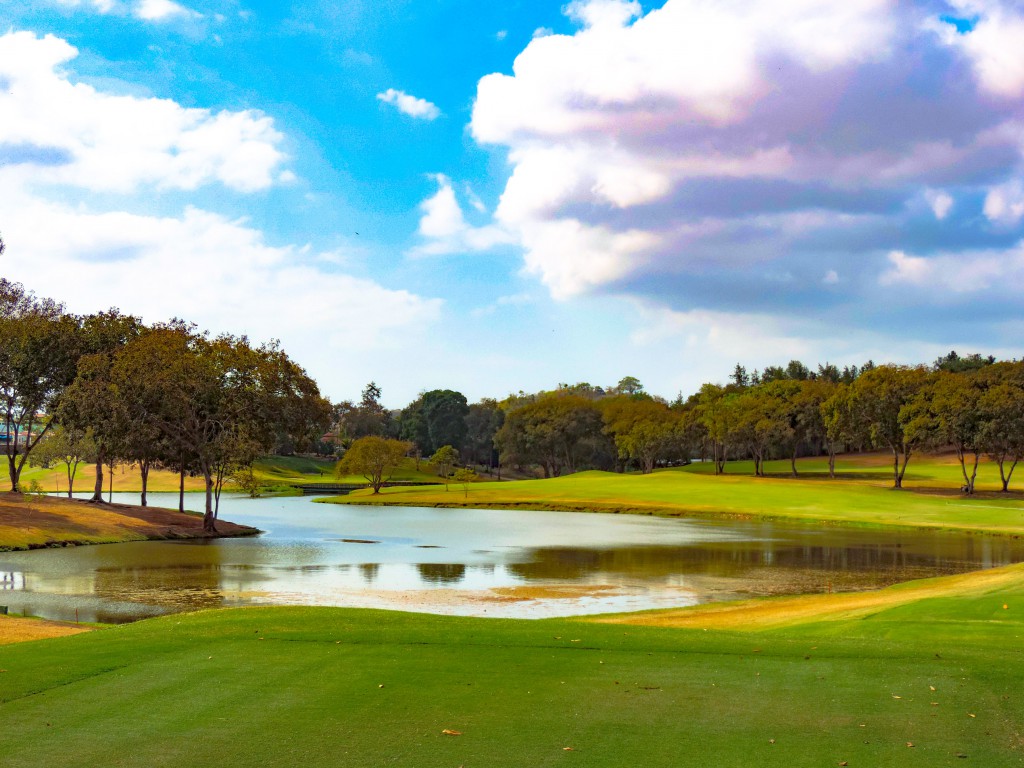 No matter what they term par, this is a great hole as shown by this view from the tee!  (Photo by Robert S. Fagan) 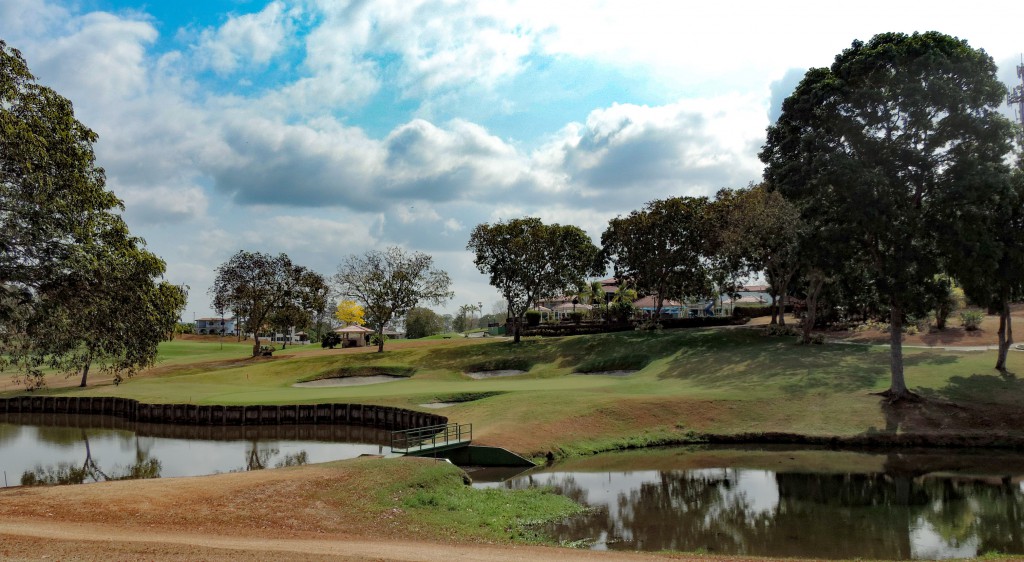 A view of the same hole looking from the side toward the putting surface.  (Photo by Robert S. Fagan) 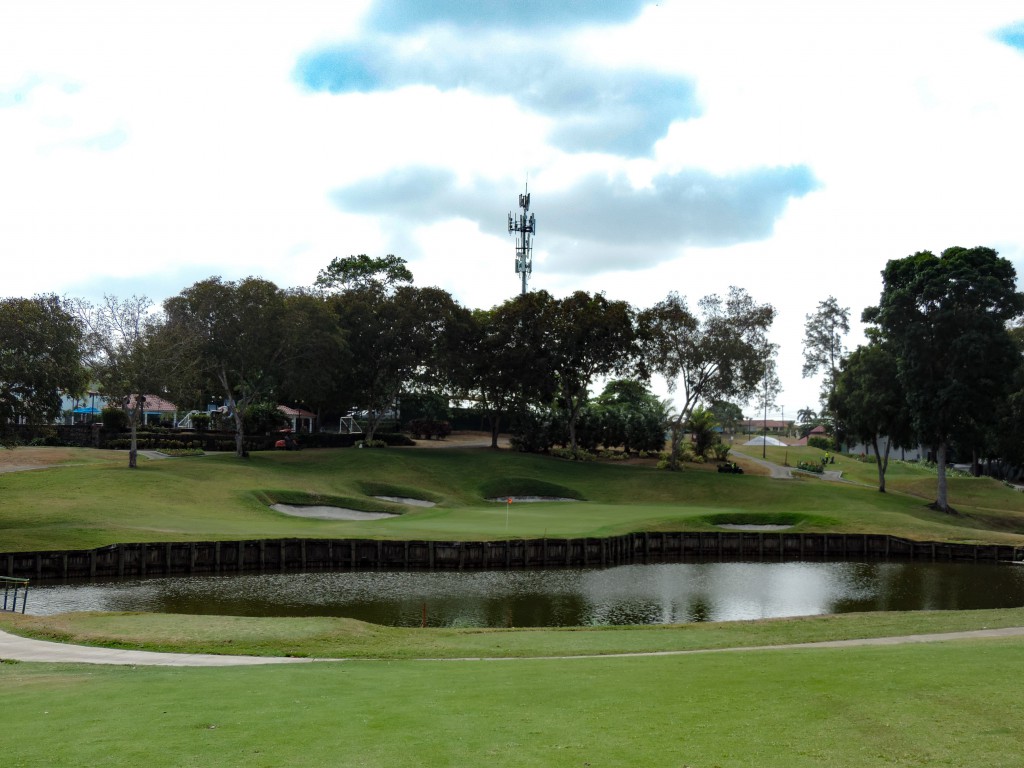 A daunting approach from any distance!  (Photo by Robert S. Fagan) 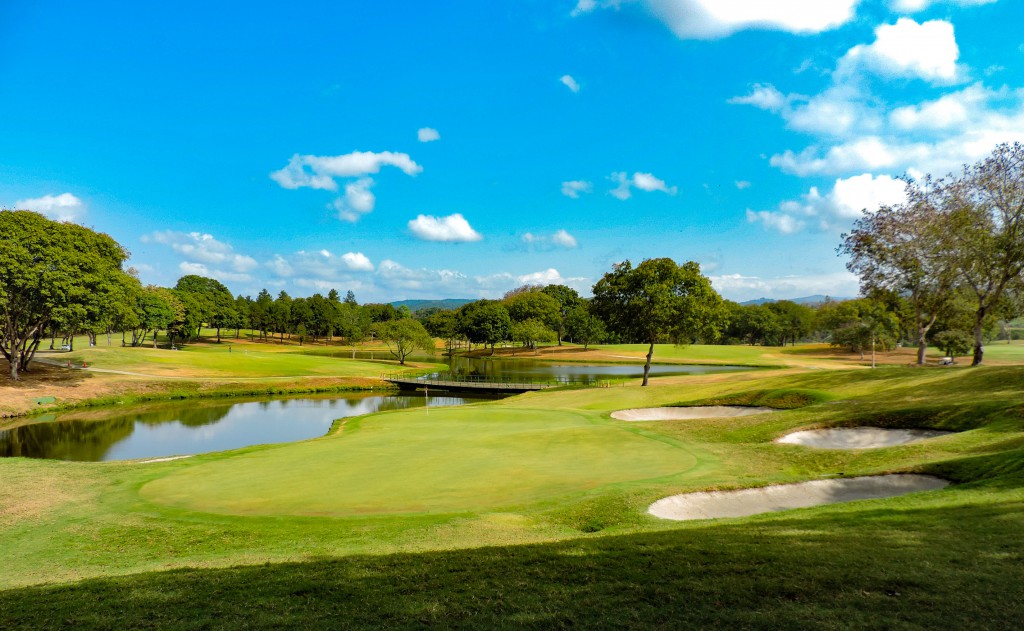 A view from behind the green looking back toward the tee.  (Photo by Robert S. Fagan)

The rest of the course will test your accuracy and patience. This is not a layout that pays dividends for overpowering it. I encountered firm, fast running conditions during its summer season making it play even more narrow. And the conditioning is good. Make no mistake about it, the Club de Golf de Panama is the venerable standard of competitive golf in Panama and worth wrangling an invitation to play. (The club may entertain advance requests for individuals to play during the weekdays.)

Above:  this 398-yarder requires an approach shot over another hazard with the green pictured from aside below. (Photos by Robert S. Fagan) 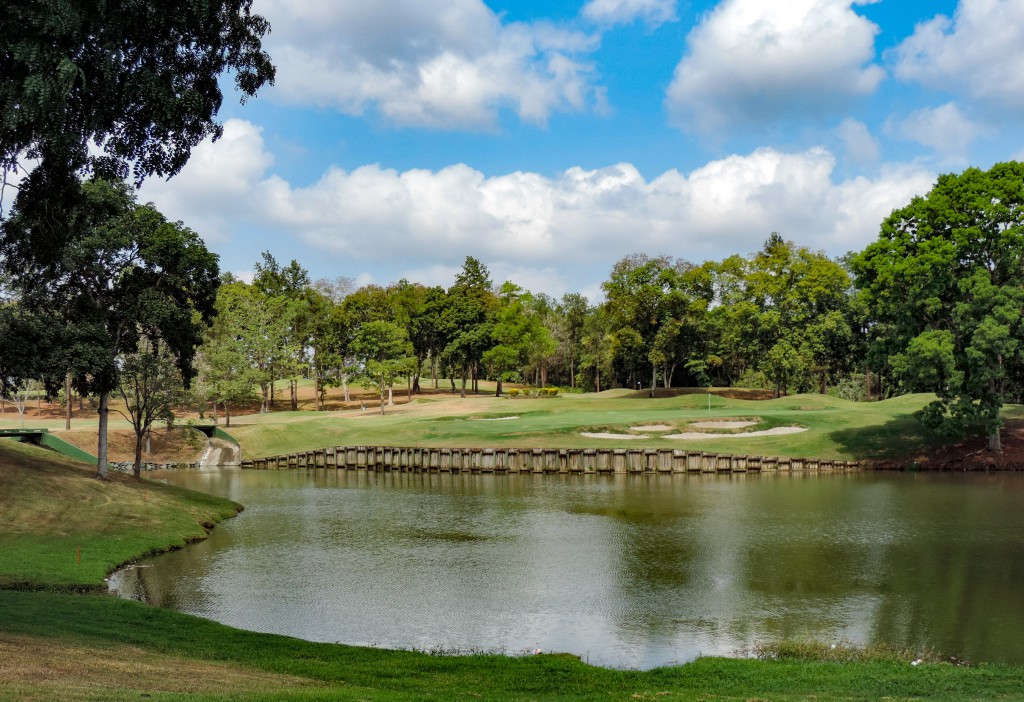