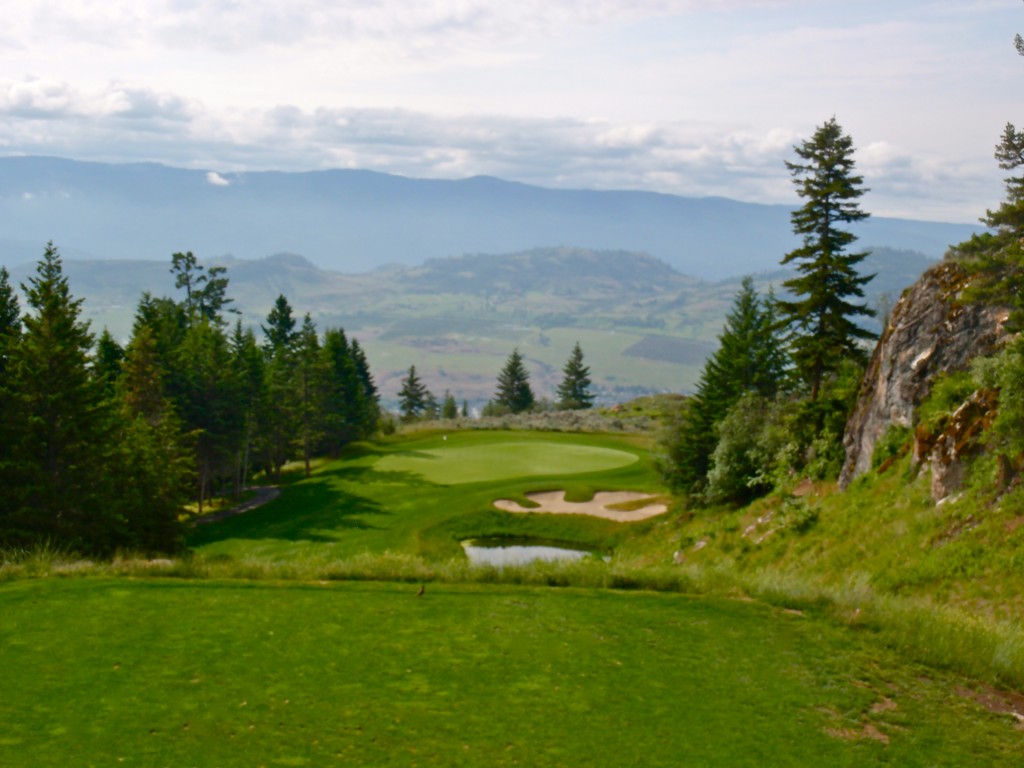 The picturesque par-three 15th at The Rise.  (Photo by Robert S. Fagan)

Set high above the northern section of Okanagan Lake is The Rise.  A product of the golf course architect Gene Bates and professional golfer Fred Couples, your anticipation grows as you climb higher on the hill and you won’t be disappointed.  Once you reach the clubhouse area, the views are spectacular, just part of the treat you are in store for when you play The Rise. 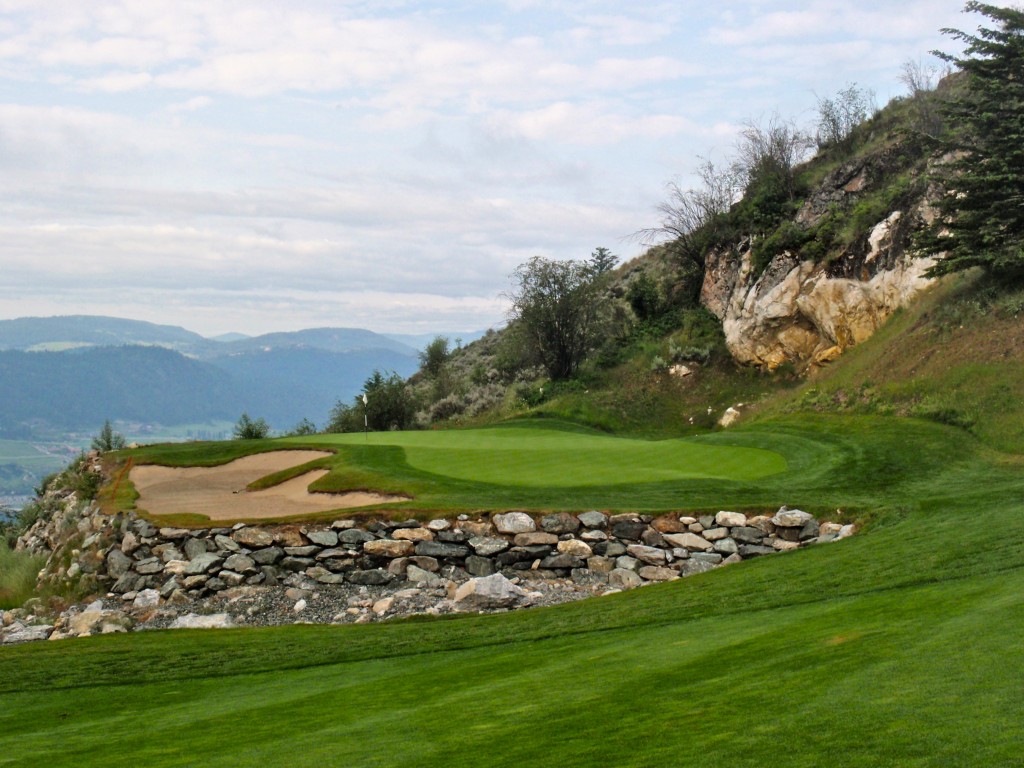 This demanding approach shot was once the first hole.  Now it’s the par-five 10th.  (Photo by Robert S. Fagan)

The course used to quickly start out in a most demanding fashion on this 250-acre property.  The par-five first hole featured a most intimidatingly small protected putting surface followed by the uphill 431-yard second that plays at least seventy yards longer due to its climb.    Easily the most demanding hole on the course, it was followed by another stout test, the 443-yard 3rd.  All this proved too difficult.  Wisely the management traded the nines allowing you to edge into your round in a bit easier fashion.  Notice I did not, however, say “easy.”  Now you begin your round with a short par-four with a pond that will catch many a shot,  a very demanding par-three, and only then a docile par-five.  In this manner you ease into what becomes an increasingly demanding and exciting test of golf that is sure to delight you.

Looking at the par-three 7th green with the par-four 6th green in the distance.

Once you finish the 415-yard 6th and face the pristine par-three 7th, you are in a state of “Wow,” and as you descend down the par-four 8th and par-five ninth, you almost feel that you are on a roller-coaster ride as you play directly down toward Okanagan Lake.  While the views of the lake and Vernon are simply spectacular, you better keep your attention on the golf or The Rise will quickly grab you because you are about to play the aforementioned group of 10, 11, and 12, holes that Fred Couples has called among the toughest stretch he has ever played.

And the “Wow Factor” doesn’t stop there.  The 13th hole is one of several blind shots on the golf course, but in this case it’s a drivable par-four at only 298 yards, the last fifty yards or so going downhill.  The glimpse of the lake behind is so spectacular that you will no doubt want to pause and stretch your round a bit longer.   And the most spectacular of all holes may be the 192-yard 15th.   From the elevated tee, the green appears to stretch into a green infinity with another finger the lake below in the distance and a sheer rock wall to your right.  The back nine is really a special stretch, but then again so is the entire golf course. 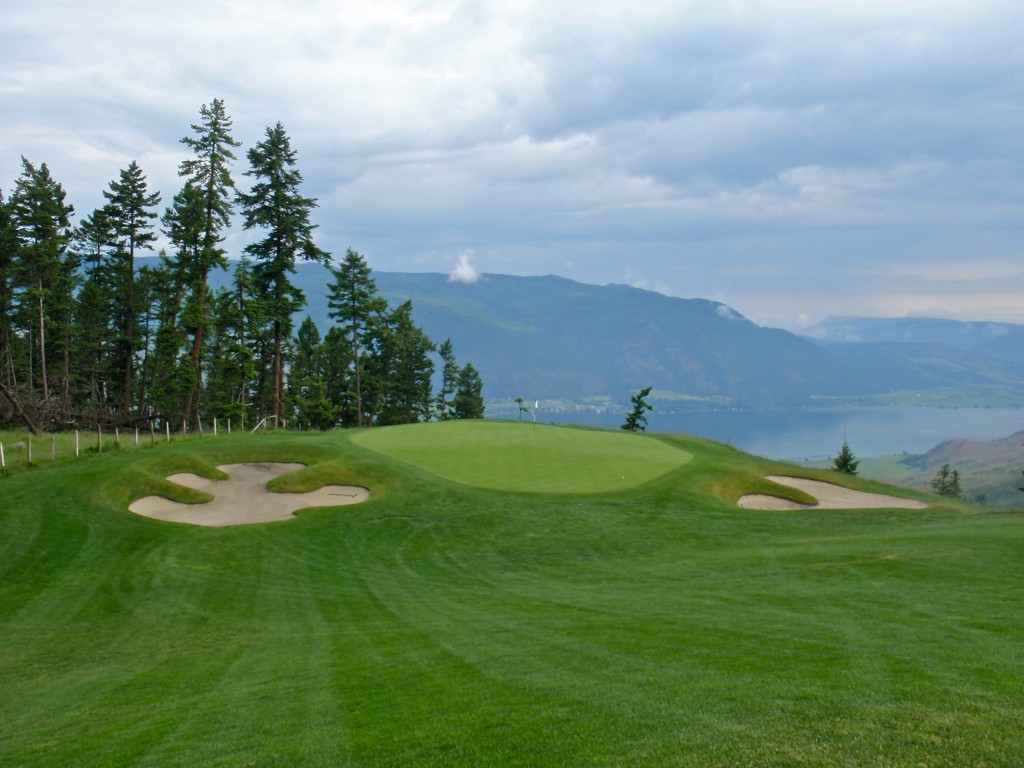 Don’t be fooled for a second that at only 6,884 yards from the tips that The Rise doesn’t lack punch; it’s got lots of it!  The 431-yard 11th plays more like 500 yards and the 298-yard 4th could yield an eagle or a disaster!  There are also a number of semi-blind shots about the course where you can only see parts of, but not your total target so you will undoubtedly waste a couple of shots your first visit or two.   And errant shots into the wetlands and high fescue rough will spell real problems though most of the corridors are more than comfortable in width.   Overall, I would describe The Rise as potentially a very gnarly examination, particularly if you are struggling with your game.

I also found that course’s conditioning to be superb.  Traditional rectangular tee boxes and native fescue grasses adorn the closely mown fairways to present a beautiful classic look.  When you add the vistas of Vernon and Okanagan Lake, The Rise is truly something to behold. 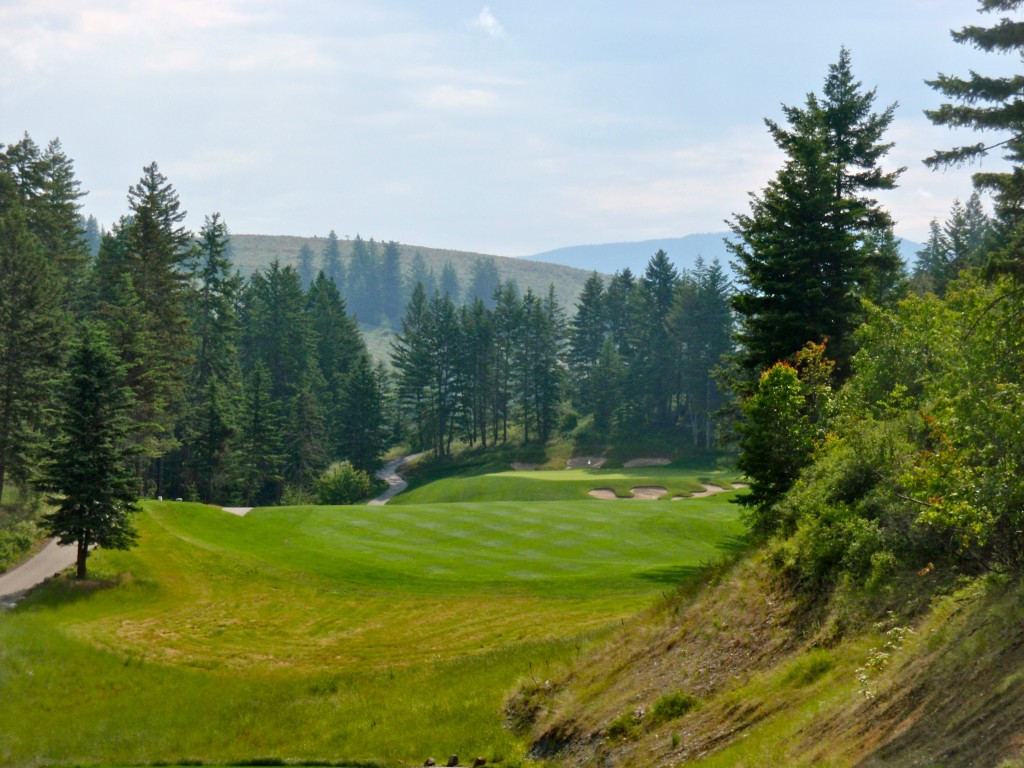 The 429-yard 17th is just one of many attractive holes on the more wooded back nine.  (Photo by Robert S. Fagan)

Yes, set about 1,100 feet above the lake, the course occupies views that surprise even the locals.  It is not only great views and rugged elevations, but also natural wetland habitats that will engage you.  While The Rise is designed as a real estate development course, the housing is currently located below most of the golf so there are no intrusions upon this most natural of ecological golf sites.

Beneath its grandeur, The Golf Club at The Rise is a collection of exquisite design details, surprising discoveries, and unique moments. – a panoramically stunning layout offering good variety that you will long remember. 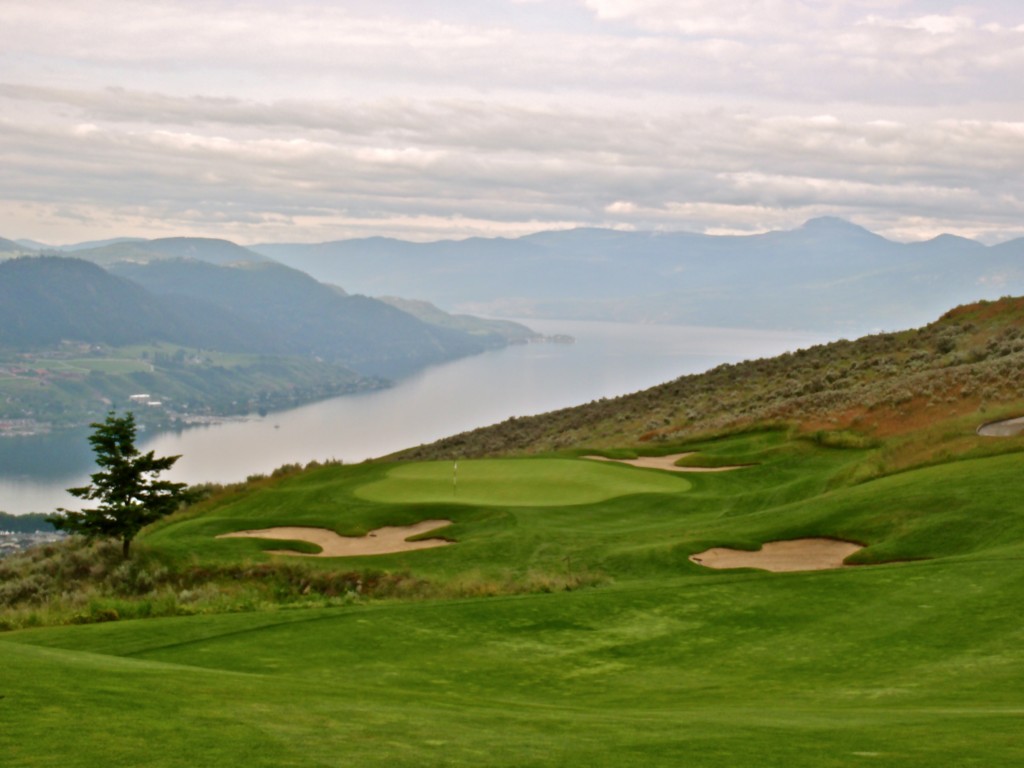 Fagan Rating:  This is a golf course worth traveling a distance to play.  Early on the course heads back into the hills and there are a few more mundane holes.  Particularly I found the stretch of the third, fourth, and fifth holes to be adequate, less than impressive, and that’s where my critique ends.  This is a “top of the world” kind of golf experience and the rest of the golf course makes for both compelling golf and sightseeing.  Furthermore, I totally agree with the strategy to switch nines.  The Rise is a rather outstanding golf course and a gorgeous piece of property that you must play when in the area! 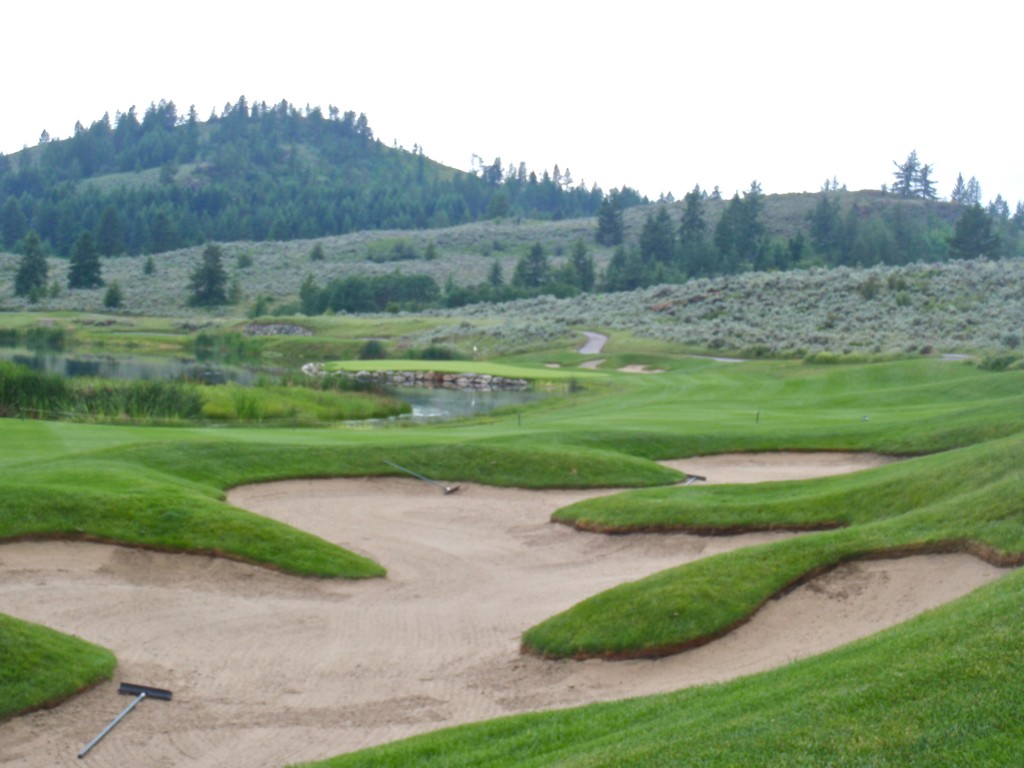 Beginning with the par-four 6th, the game is really on at The Rise!  (Photo by Robert S. Fagan)