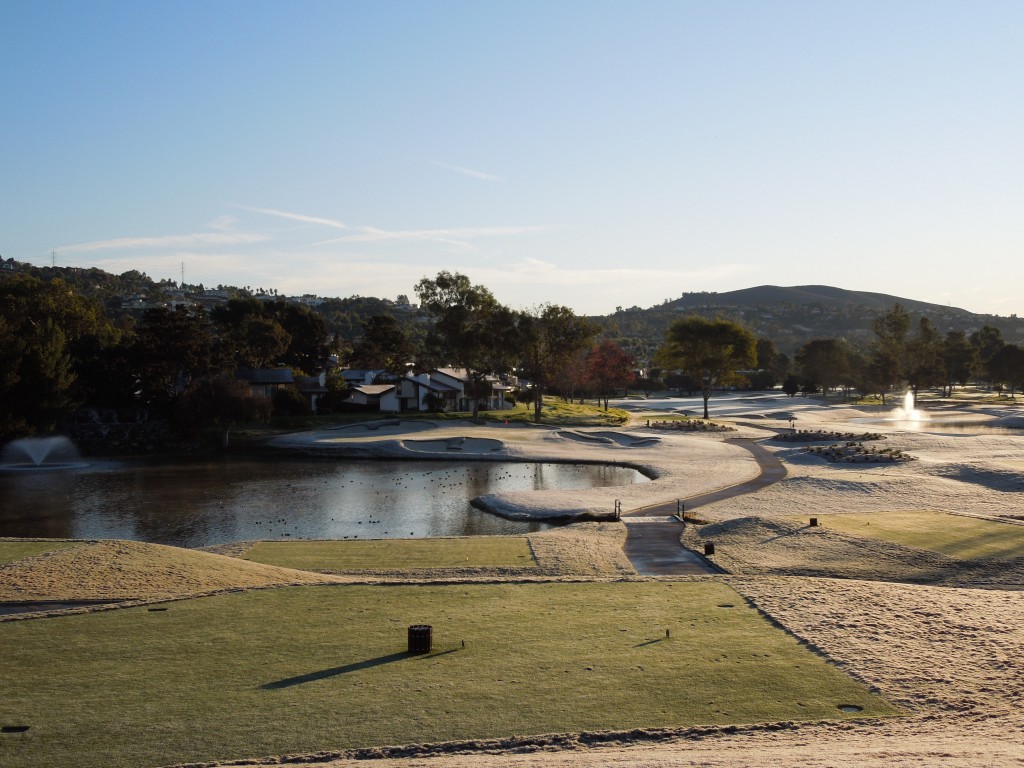 The La Costa Resort and Spa in Carlsbad, California has a rich history in Southern California golf extending well onto the national stage.  In 1965, it’s Dick Wilson-design 18 holes opened and soon the PGA TOUR’s Tournament of Champions and the popular CBS Golf Classic brought the facility into the homes of millions.  Next the two original nines split and a new nine for each was added by Wilson-protege Joe Lee to make up the North and South Courses.  The golf was good, but not quite the equal of the original  “composite 18” that everyone continued to see on television.  Eventually the competitions went away and the courses as well as the resort’s conditioning started to fade.  Beyond that, the two new 18-hole courses appeared spliced together and didn’t really excite many.  Discriminating golfers continued to want to play the composite course, which by now would take two rounds of golf. 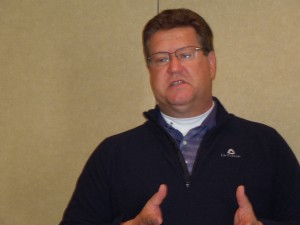 In the meantime, KSL took over ownership and saw opportunity.  The team of Damian Pascuzzo and Steve Pate along with friend and fellow architect Jeff Bauer were brought in to renovate much of the golf facility.  In an extremely busy, aggressive 2011 schedule, the trio’s tasks were several.  Build a better North Course that will become the “championship” Champions Course, improve drainage, make the course family-friendly, and conserve natural resources while minimizing expenses.  They succeeded on all fronts.  (They also worked on the four holes on the South Course adjoining the clubhouse area.)

I was able to preview the “new La Costa” in early December, 2011 (the Champions Course is open to limited play on alternate days while the South Course takes on full play on alternate days).  The North Course’s course’s conditioning is now superb thought the roughs and native grasses are about six months away from fully growing in.  Seven inches of sand were added to all the fairways, and many miles of drainage pipes along with more ponds were added to facilitate better drainage conditions.  This really makes a difference since much of the Champions Course is situated on a coastal flood plain.

Now La Costa is blessed with two different looking and playing courses.  The more rugged Champions Course will easily take on competitions once the rough matures by mid-2012.  In contrast, the South Course is a more parkland style and has 7 Wilson holes, 7 Lee ones, and four Pascuzzo/Pate/Brauer ones.  While its motif is more refined with flowers, and more trees coming into play, it is no pushover either.  Its “Longest Mile” finish of 15-18 plays against the prevailing ocean breeze and takes one well-executed solid play after another to keep a good score intact.  The only negative that I noted on the South Course was that some of the putting surfaces seem to have shrunk over the years (maintenance mows a fraction of an inch often and over time the greens do shrink).

The following pictures of the Champions Course were taken during my late fall preview and don’t begin to convey the beauty about to unfold at La Costa once the Bermuda rough is no longer dormant and native areas mature and blossom. 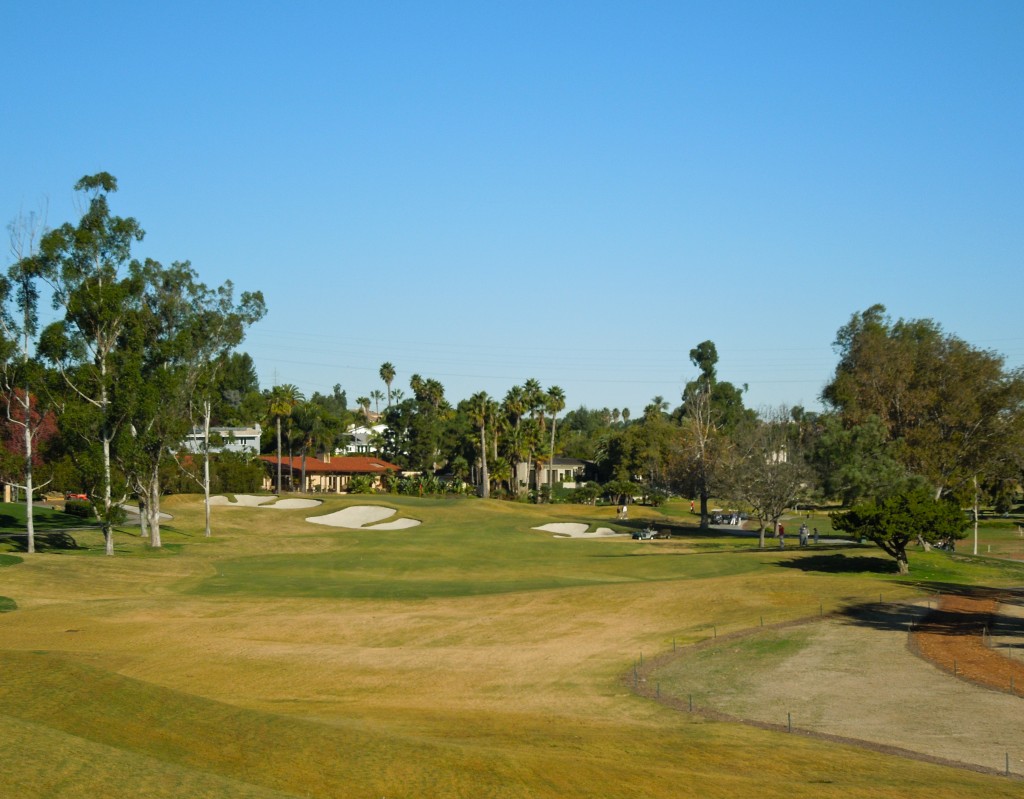 The first hole features a straight forward start.  The roped area at the bottom right will be native grasses. 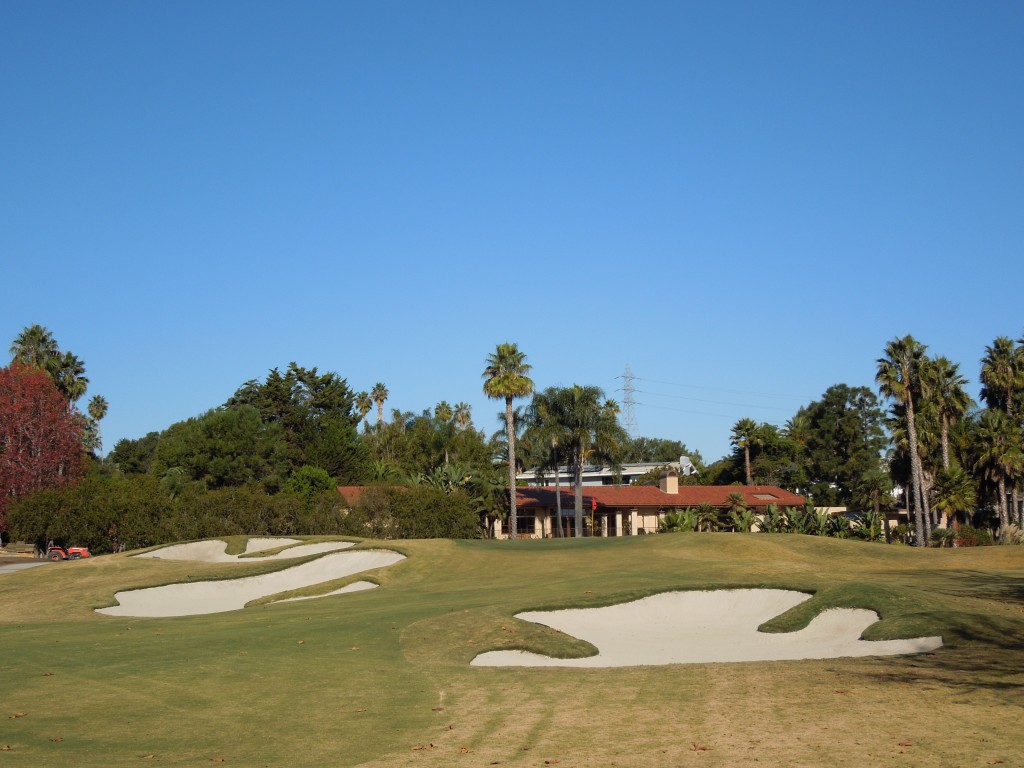 The putting surface on the first hole has been elevated from its former position. 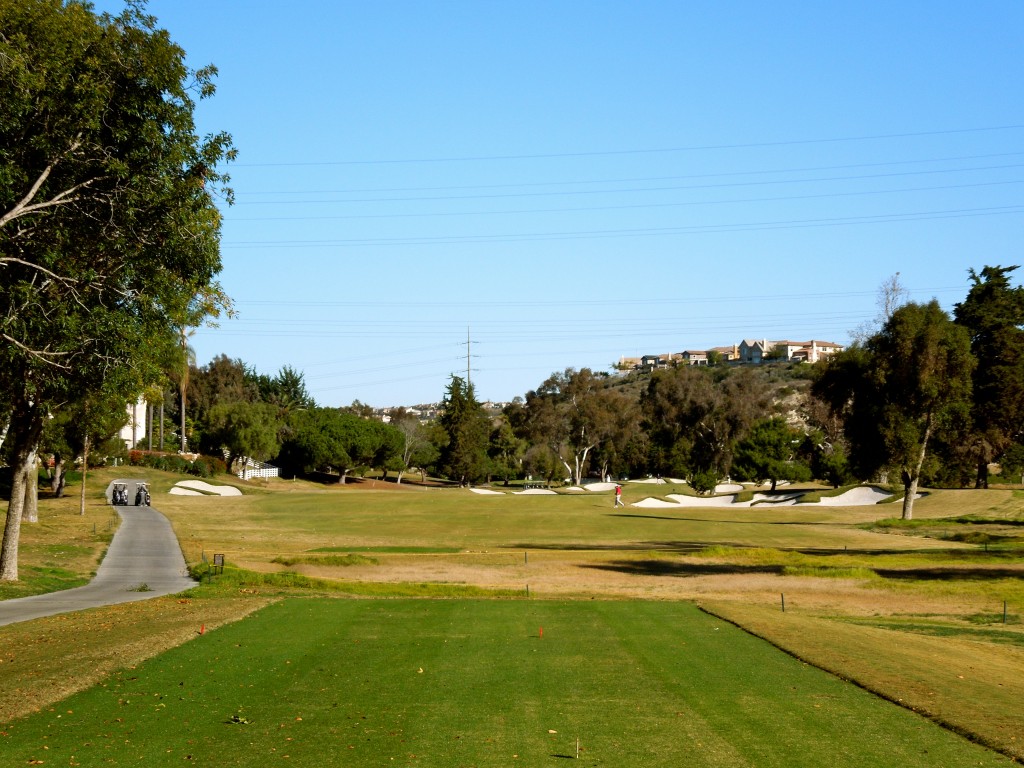 The Champions Course plays in the same basic corridors that the former North Course did, but the bunker patterns have been repositioned as shown by the second hole. 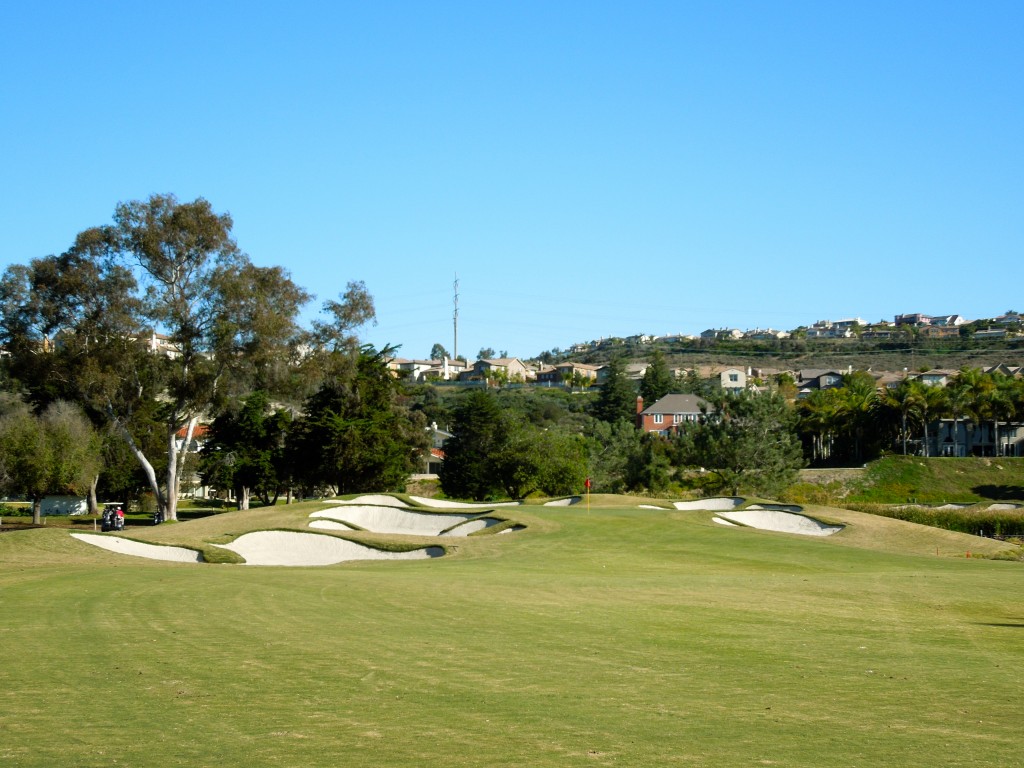 Approach shots into the narrow par-five 2nd green will do well to avoid the bunkering. 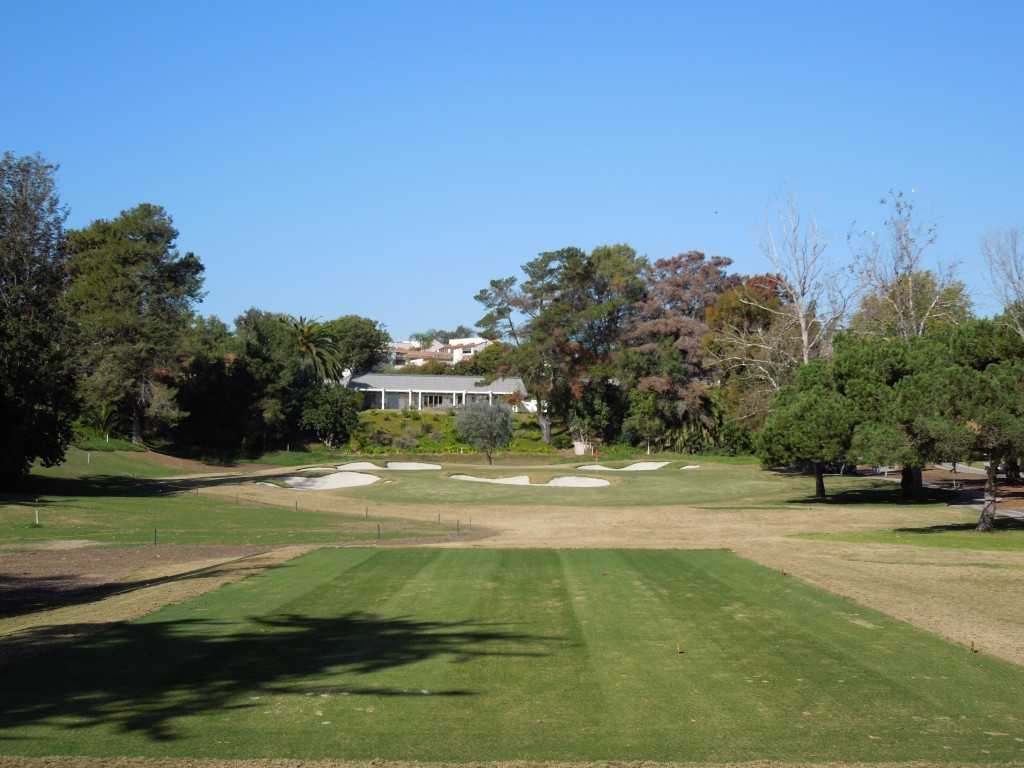 Frontal bunkering in the Dick Wilson tradition is the primary challenge on the par-three 3rd. 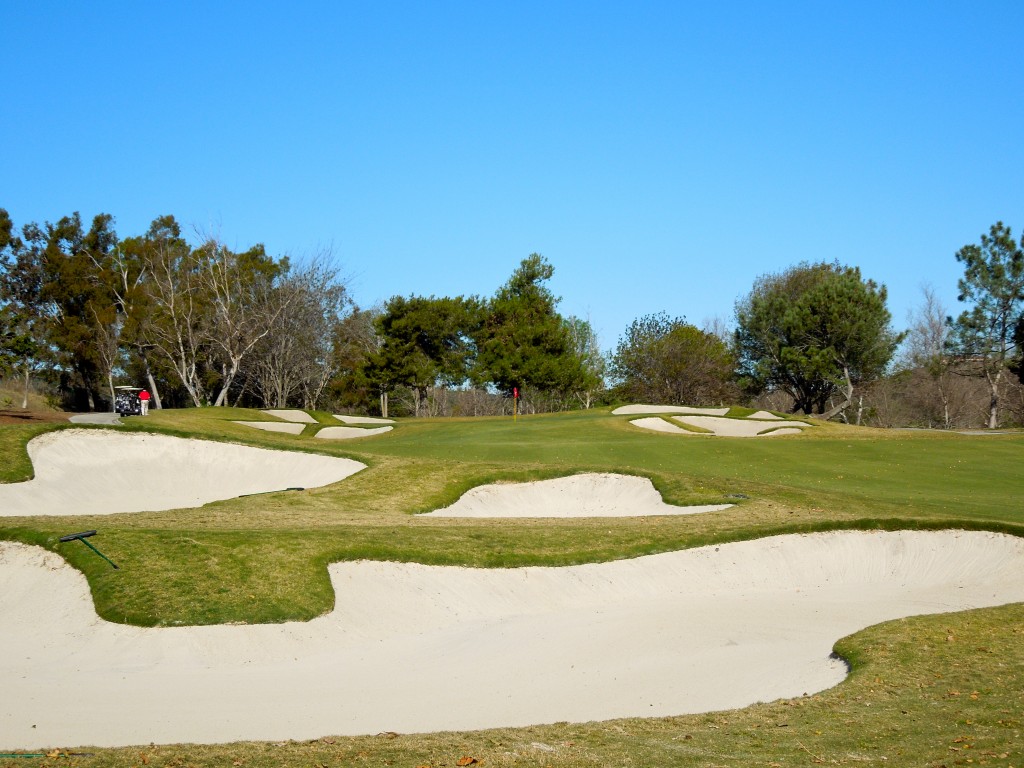 Bunkering is ever-present at on the Champions Course’s two-shotters as shown by the fifth hole. 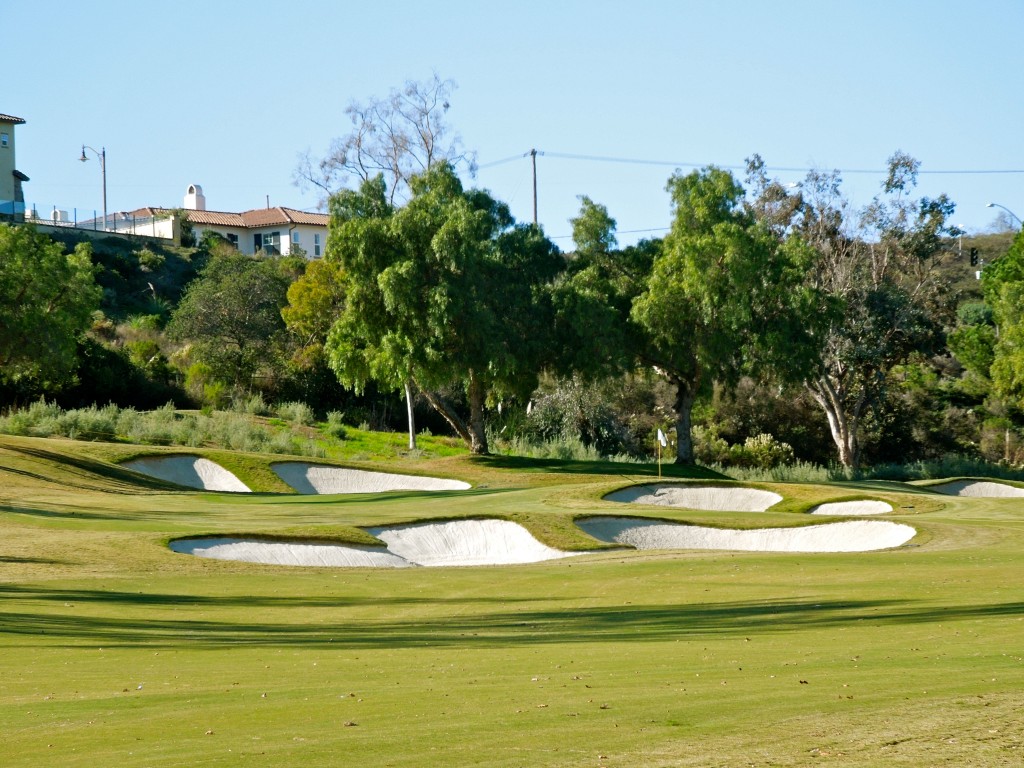 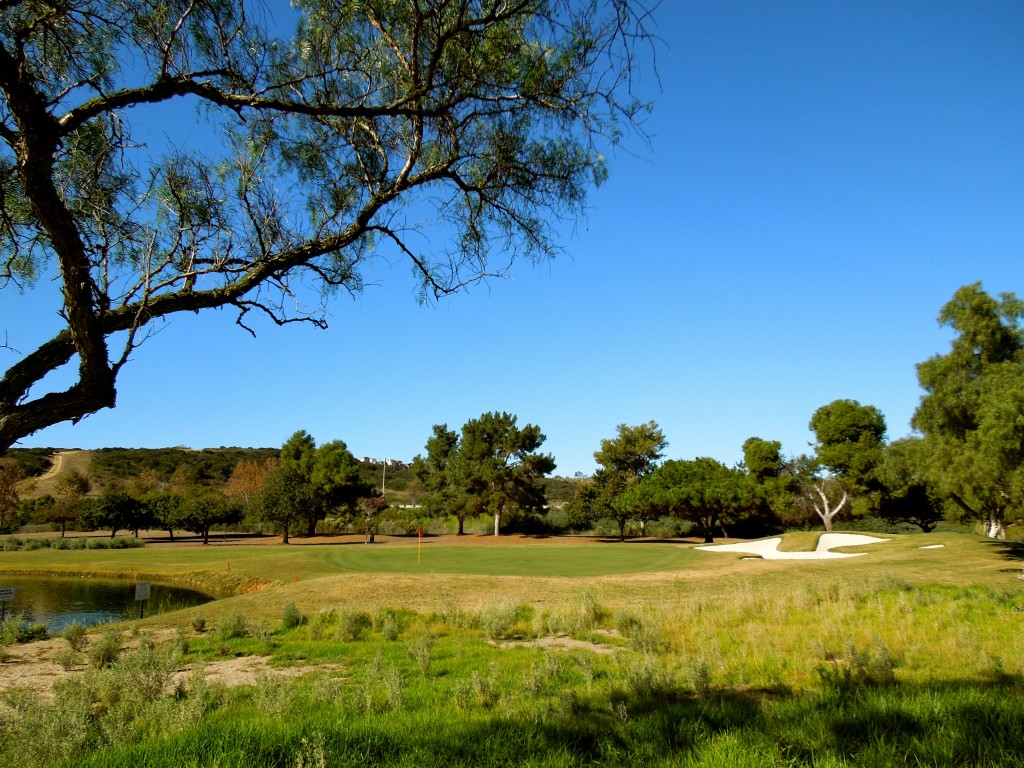 Water fronts the par-three 8th green at the far end of the Champions Course (as viewed from the ninth tee). 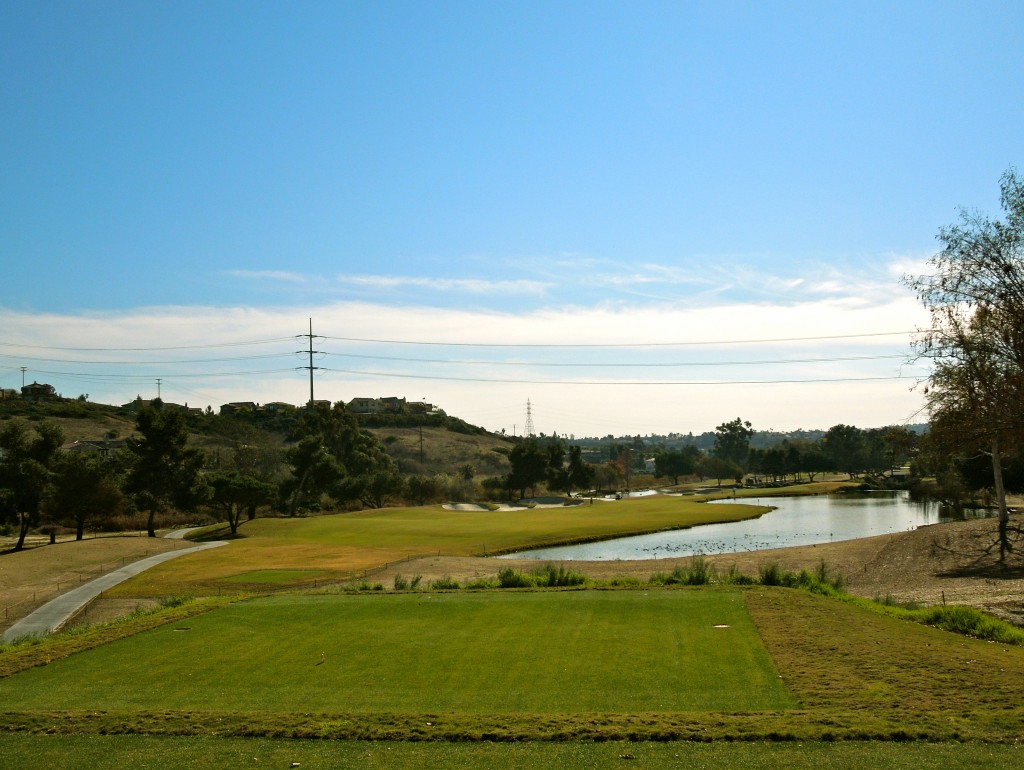 The tee shot on the short par-four 11th definitely qualifies as an “Oh Wow!” one. 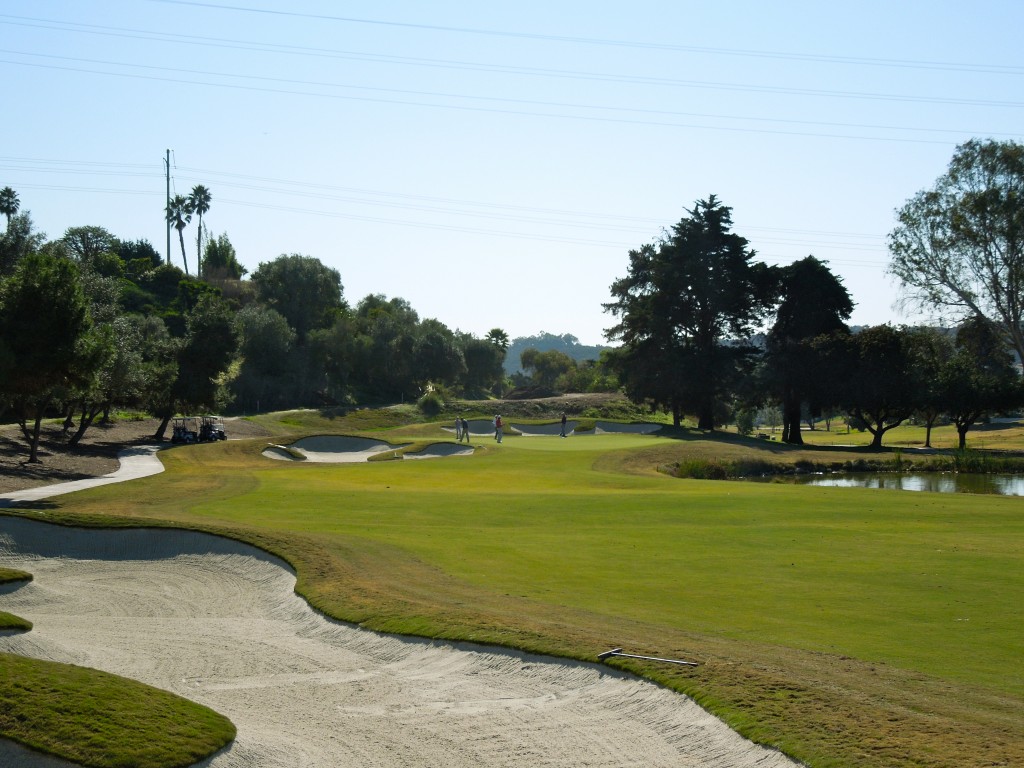 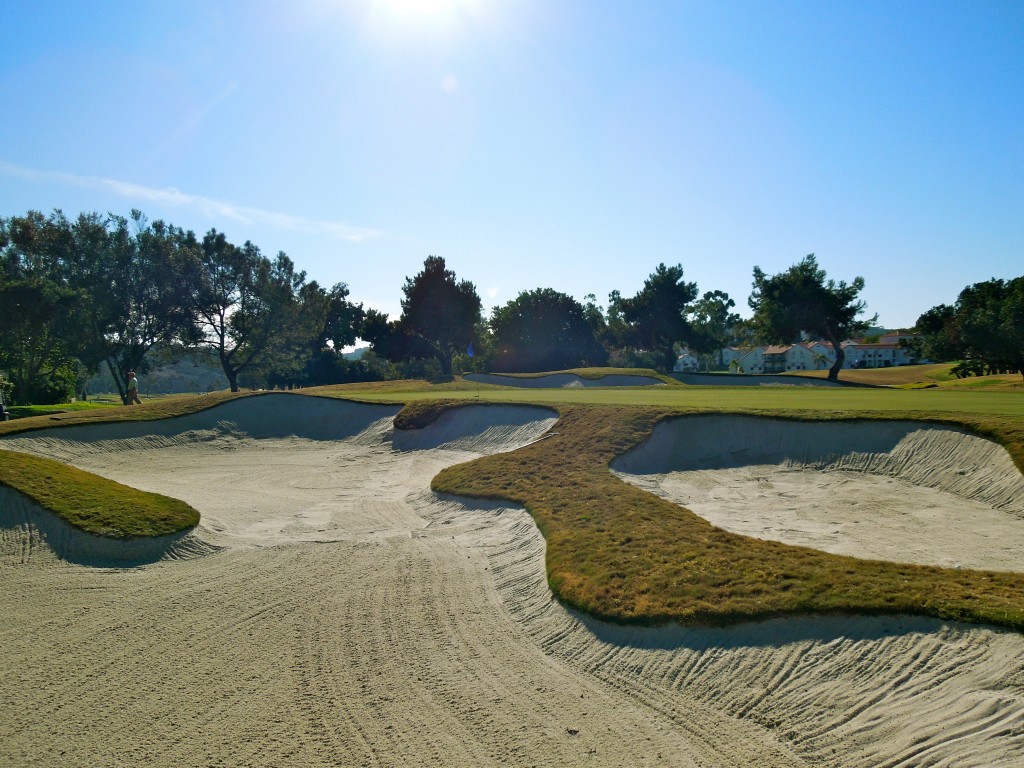 Gnarly greenside bunkers guard the left side of the par-four 14th green. 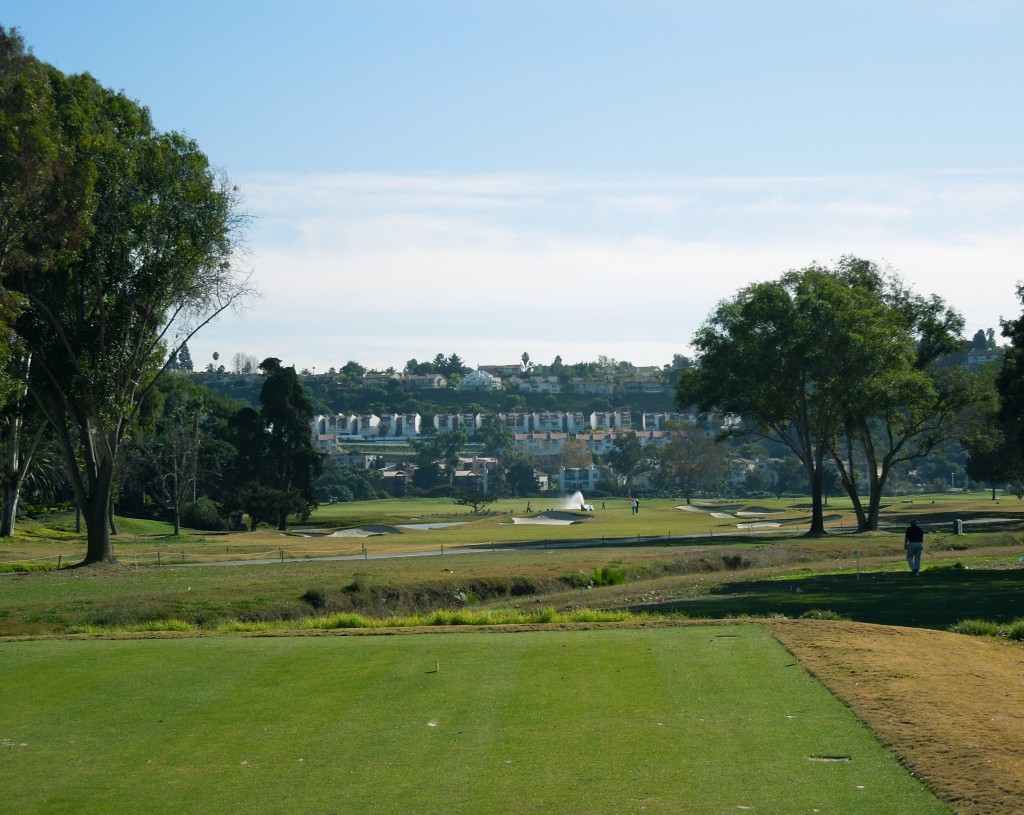 The old 15th used to dogleg right over a pond toward the clubhouse.  Now the tee has been moved to the right, the green to the left, and this short par-four is drivable. 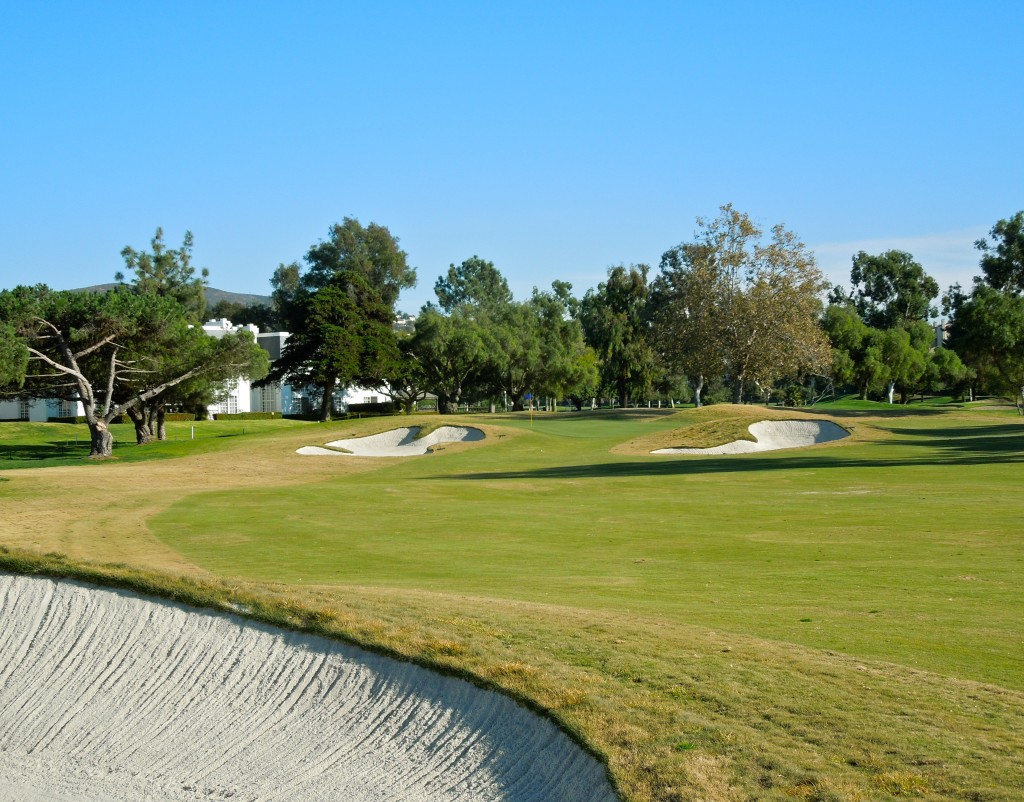 The prevailing wind is at your back as you approach the well-bunkered par-four 17th. 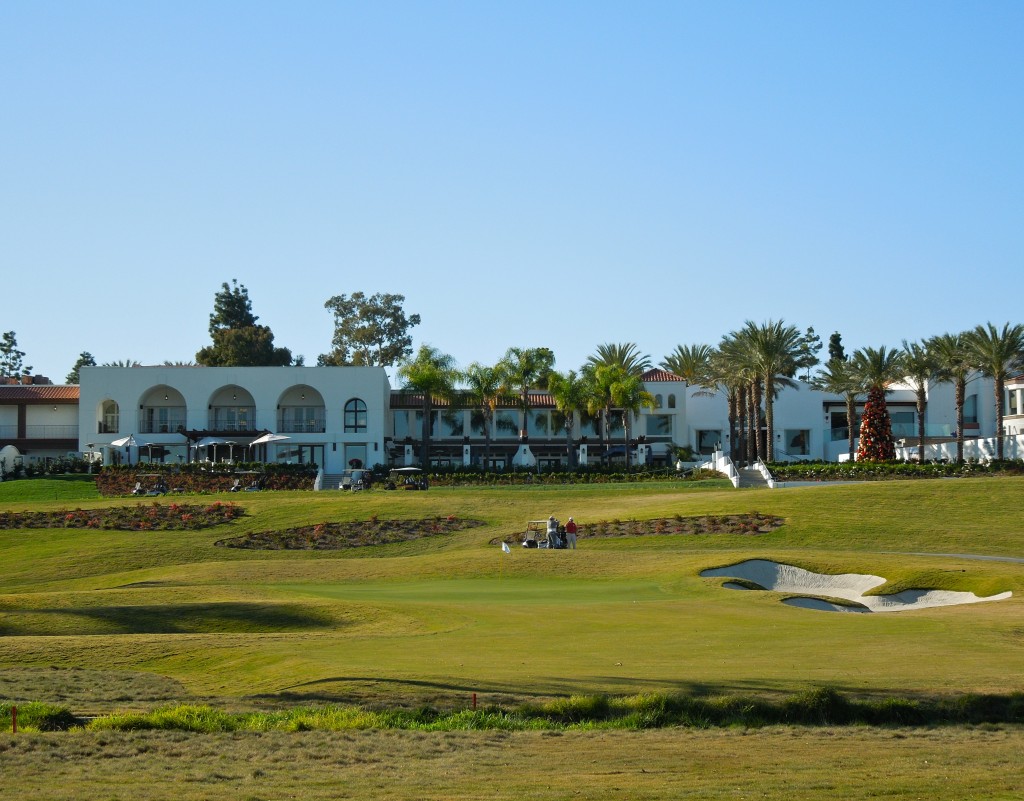 Below is former Ryder Cupper and one of the three Champions Course designers Steve Pate who also won the Tournament of Champions there in 1988 along with the author Bob Fagan. 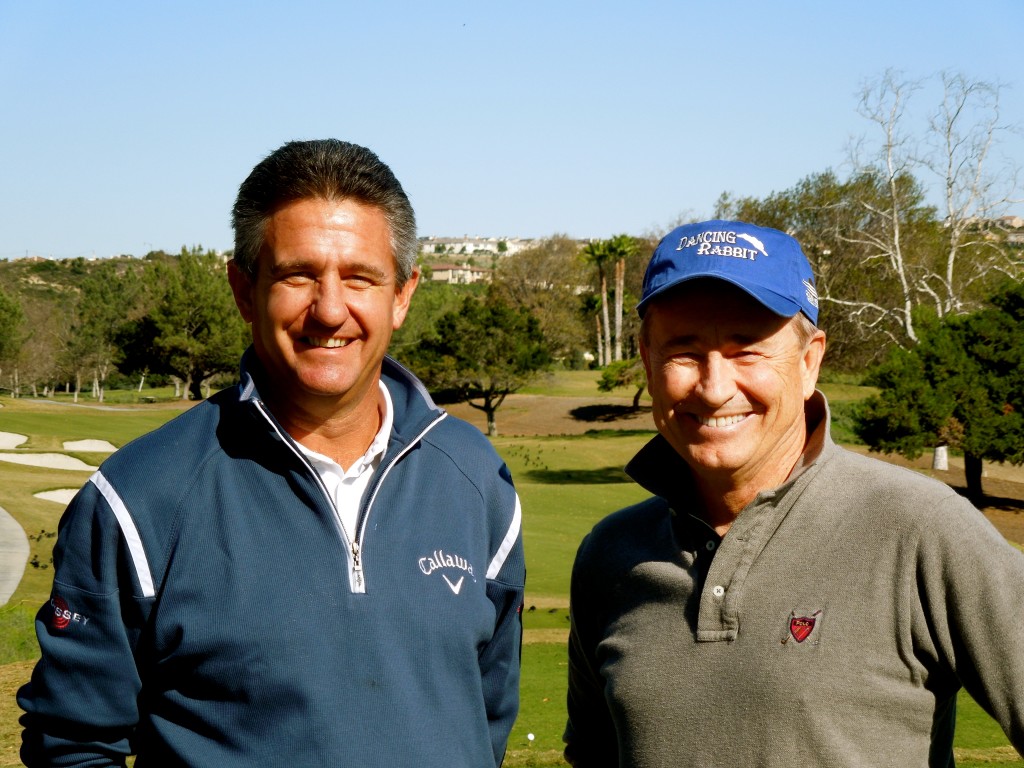