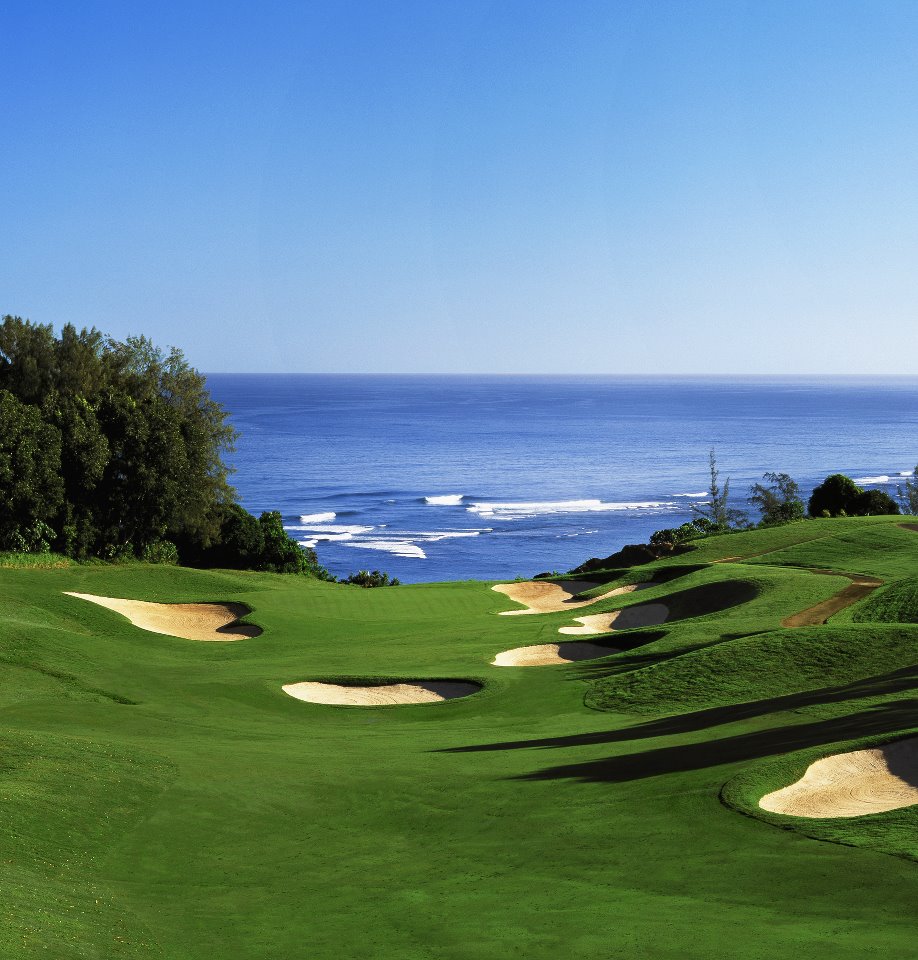 The sixth hole at The Prince with its classic bunkering, bowl-shaped fairway, and infinity green dropping off into the Pacific is one of my favorite par-fours anywhere!

If American Golf has a jungle beast of a golf course, it most certainly is The Prince Course on the north shore of Kauai. Featuring a rating/slope of 75.2/140, it is inspired by the lines of the classic courses of the Eastern United States with the tropical flair and setting that only Kauai can offer. Here you will encounter the game of outdoor chess and your crafty opponent is the course’s architect Robert Trent Jones, Jr. Should you the player try to ignore or overpower the strategy of Jones, you are in for a punishingly difficult day. This design will keep you thinking and with a number of holes not allowing the strong competent player to use their driver, it may well frustrate some. One thing for sure, The Prince is not your typical resort course that you will want to introduce a newcomer to the game; it is more of a “graduate school” variety test. 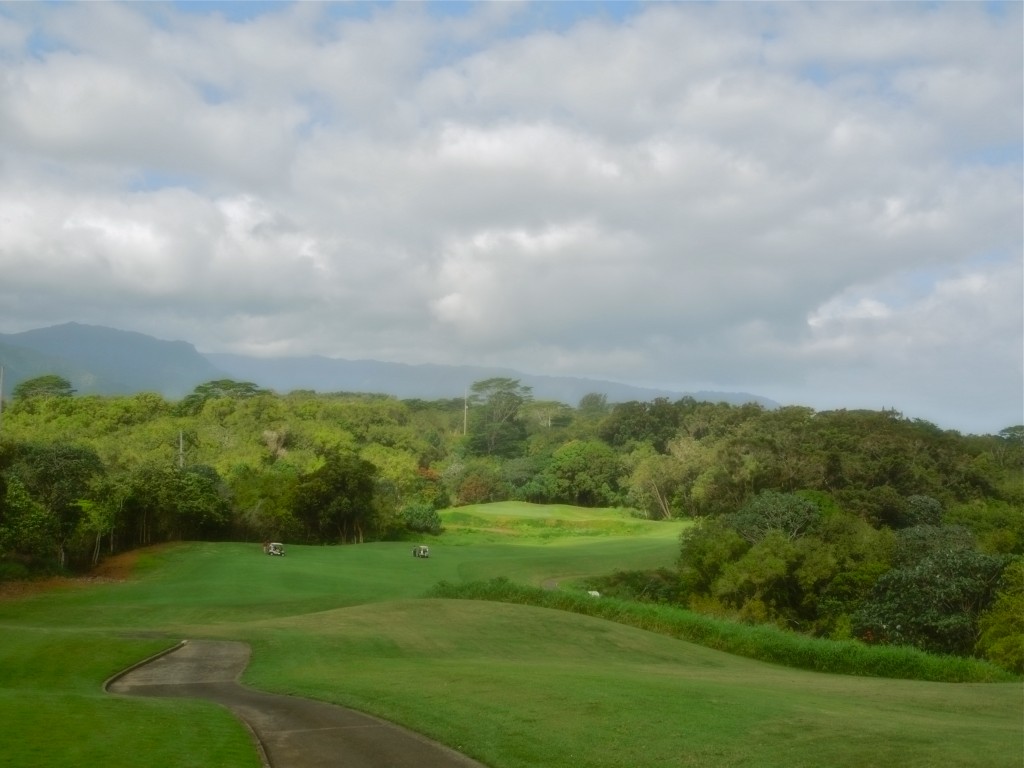 The par-four 1st hole into the jungle is a real challenge because though the fairway is very wide, it is angled and you must have the proper carry to take advantage of it. Again on the second shot, you had better not be short!

Unlike its sister course, the 27-hole Makai Golf Club, The Prince is not the “ocean course” that you might presume. It does not really visit the ocean though it is very visible beyond the 6th green and aside the 7th tee, and then the ocean is simply a distant landscape and not a golfing hazard.  Never mind that, for The Prince is still a feast for the eyes.  It is “roley poley jungle golf” bordered on its perimeter by holes higher in elevation. While you always feel the presence of the Pacific, the serrated mountain peaks and colorful fields leading up to them spell just as striking and perhaps a more uniquely striking backdrop. Either way, it all makes for a magnificent canvas! 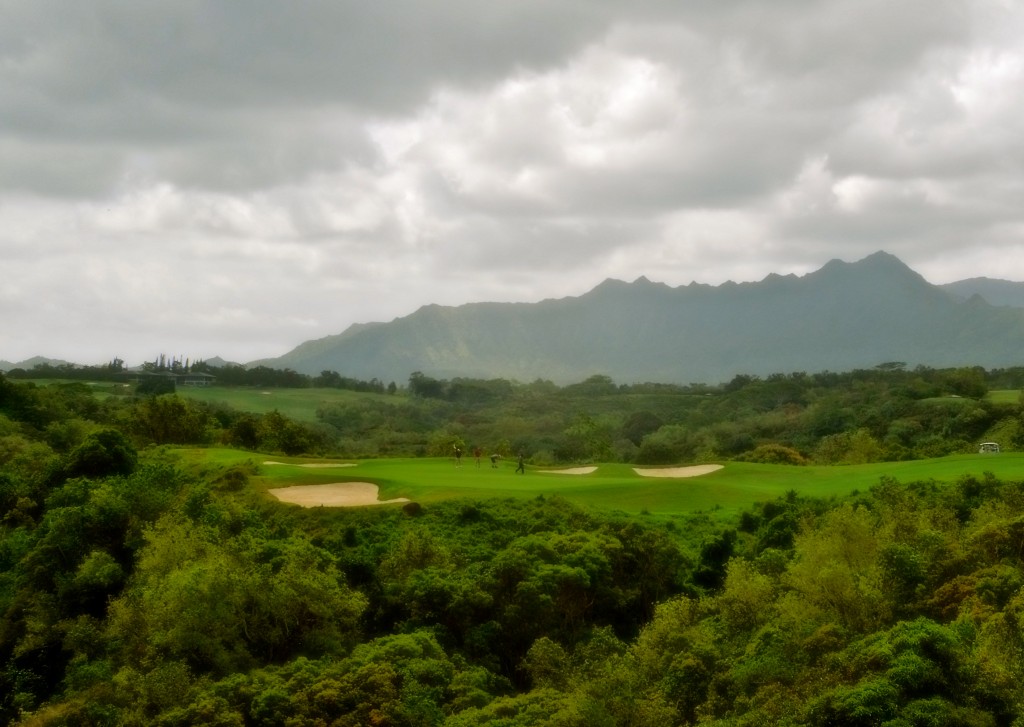 This is not just a faraway vista shot, but rather the view from the back tee of the par-three 7th hole. Jones provides an angled bail-out area to the right, but this hole can be a Driver when the wind blows!

The Prince recently underwent considerable renovations with architect Jones introducing seaside paspalum grass and recontouring some fairways to be more accepting.  Management also wisely cleared out the ever-encroaching jungle to reveal the magnificent vistas that greet you anywhere on the course. The course and the environment are so spectacular that even a non-golfer will be amazed with all the wildlife and interesting features that grace the holes. (In fact, management is now considering an I-Pad guided tour for non-golfers.) 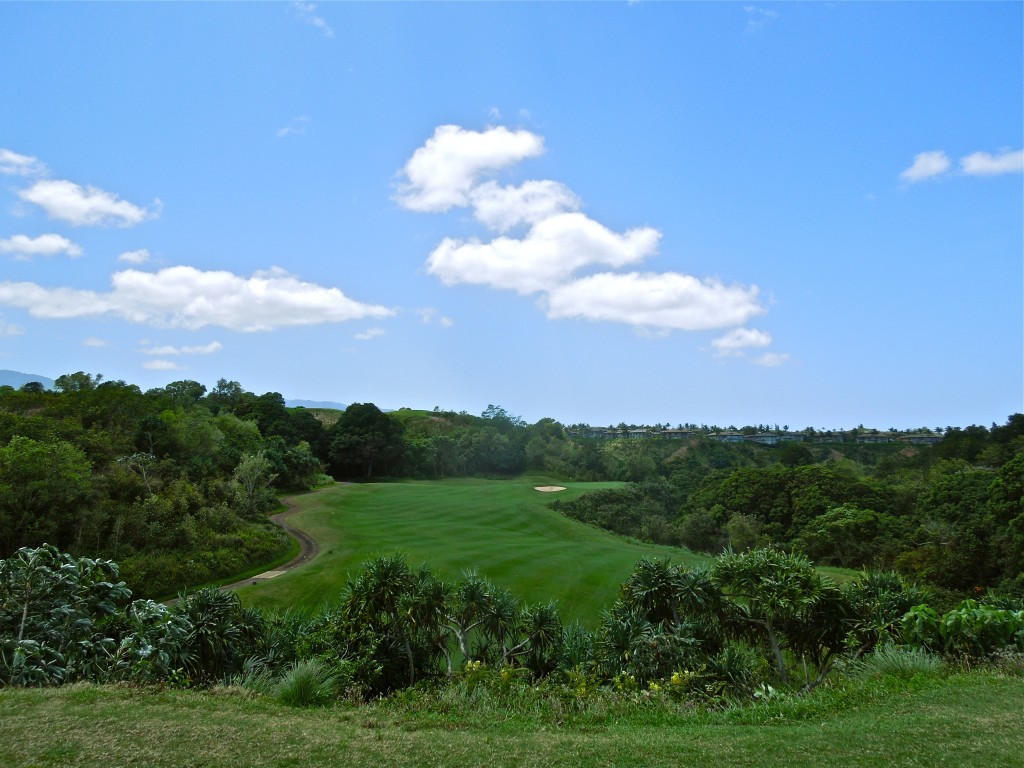 Robert Trent Jones, Jr. has called this 15th hole the best par-five he ever built. Shown here is the second shot with the green perched by the edge of the ravine just to the right of the bunker in the background.

Critics may say that the layout is too tough and that the starting holes are too disjointed, but this is not cookie-cutter golf. Jones likes you to play his game of outdoor chess. He will introduce both blatant and ever so subtle strategies/challenges before you.  Ignore them and the elements, and your score will suffer. While this is a very demanding golf course, it is not because of its length, but rather the penal consequences of wayward hits or misguided strategy. Actually many landing areas are quite wide provided you elect to play to them. 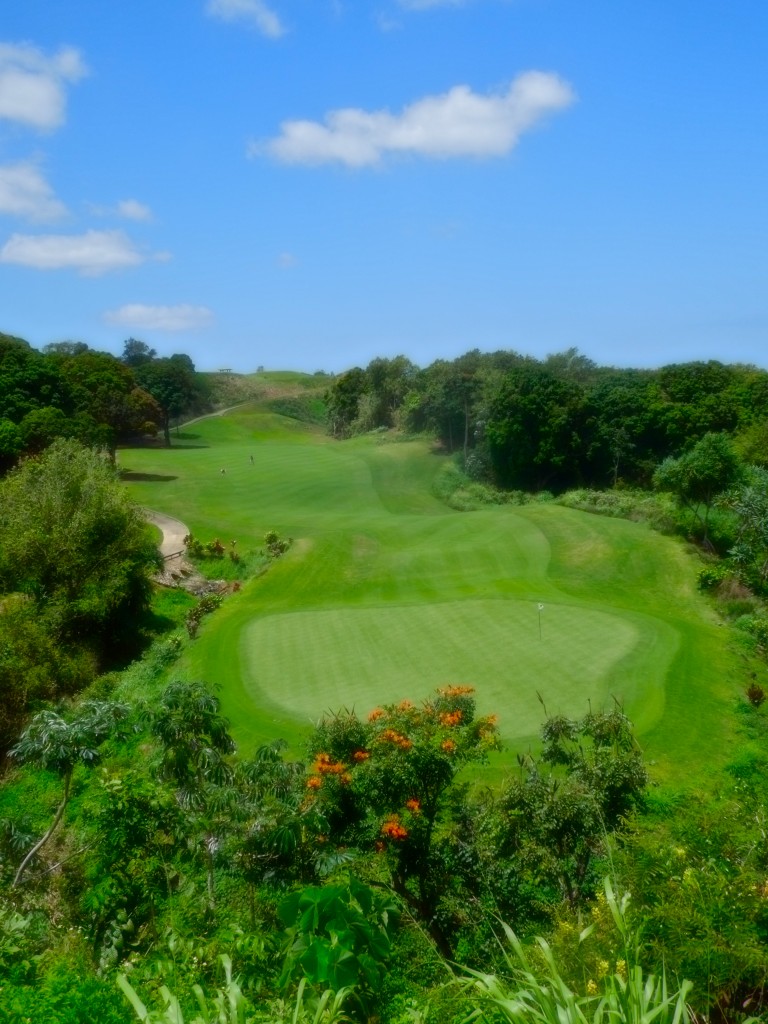 The downhill par-four 12th is one of the most gorgeous holes anywhere from any perspective.

The genius of Jones and his routing was to play into the middle or interior valleys of this expansive jungle property. I count the par-fours at twelve and thirteen in the valley among the most spectacular in the game and I agree with Jones that his par-five fifteenth is among the best he has ever built. My other favorite is the par-four sixth hole that features a classically well-bunkered infinity green site that appears to fall off into the ocean beyond. And of course, there is the spectacular par-three 7th with its head-twisting views and daunting carry. And for fun, the par-five 10th shaped like a question mark can actually be hit in two with two very well-placed shots, but it also requires a bit or daring, particularly for the shorter hitters. You see, The Prince is as much about strategy as it is about shot-making. Even with many ample fairways, my advice is to secure your spot safely in the short grass before becoming aggressive though many will be tempted to swing away, given the apparent expansiveness. 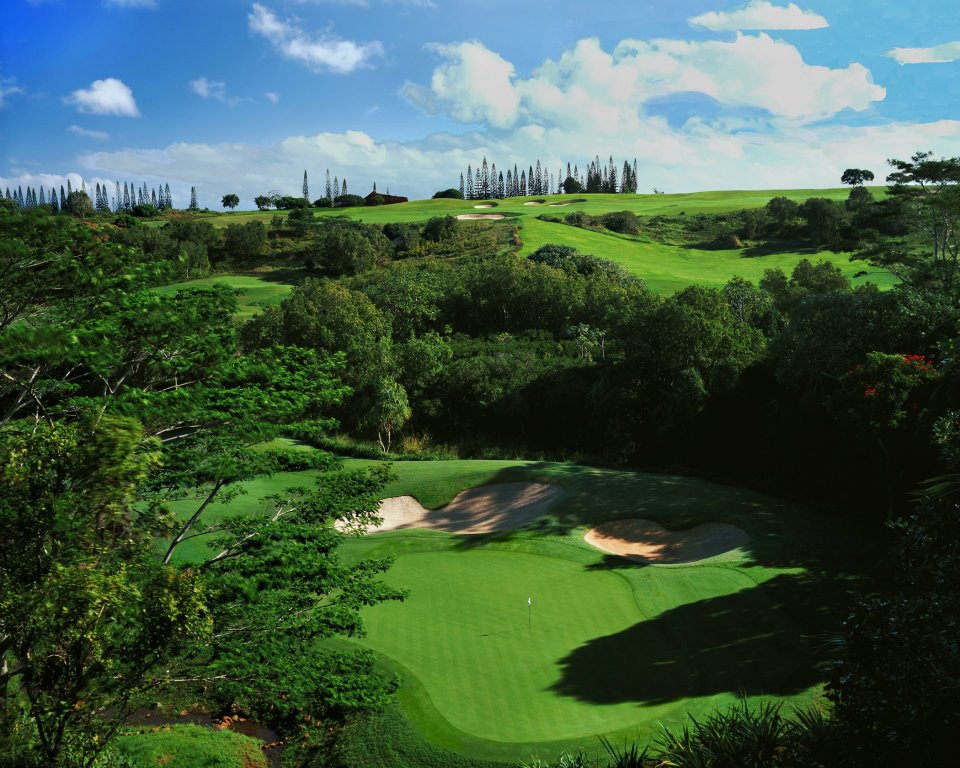 Looking down on the 13th green in the low jungle portion of the course features splendid scenery and challenges.

The Prince Course also has a magnificent clubhouse and views to match. When you add a complete practice area and superb service, this is a course that every accomplished golfer must play!

Below is the about a 230-yard approach over the edge of a jungle ravine to the par-five 10th – the “Question Mark Hole.” 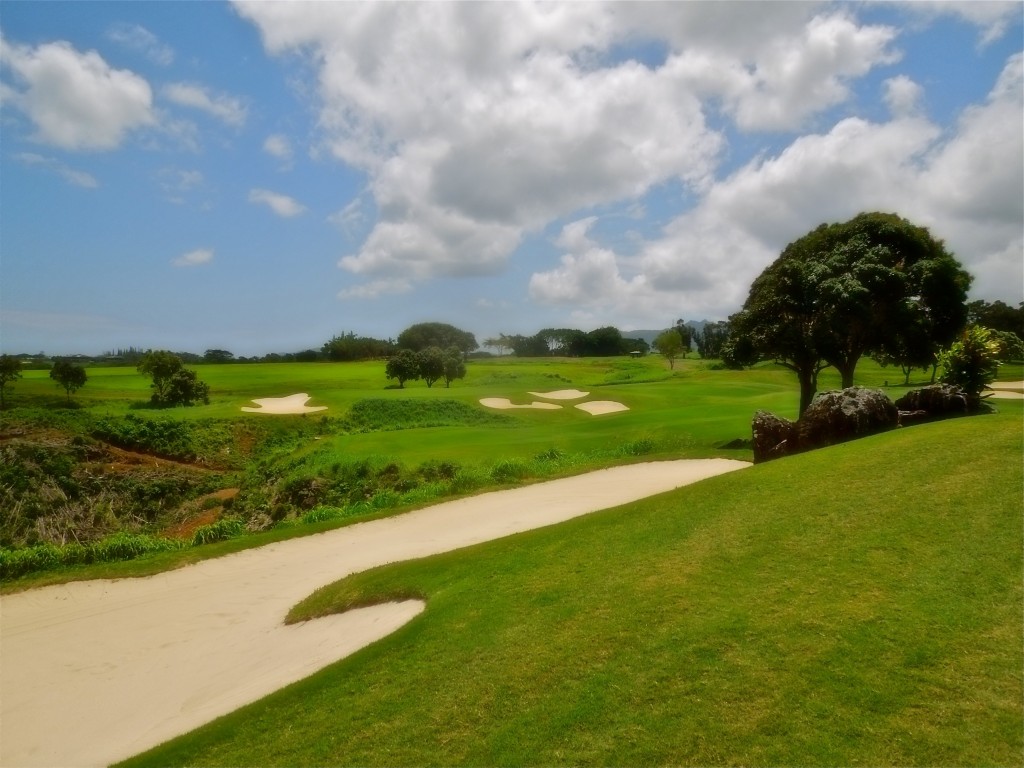 Below is the approach/green site of one of the “upper holes,” the par-five 4th hole. 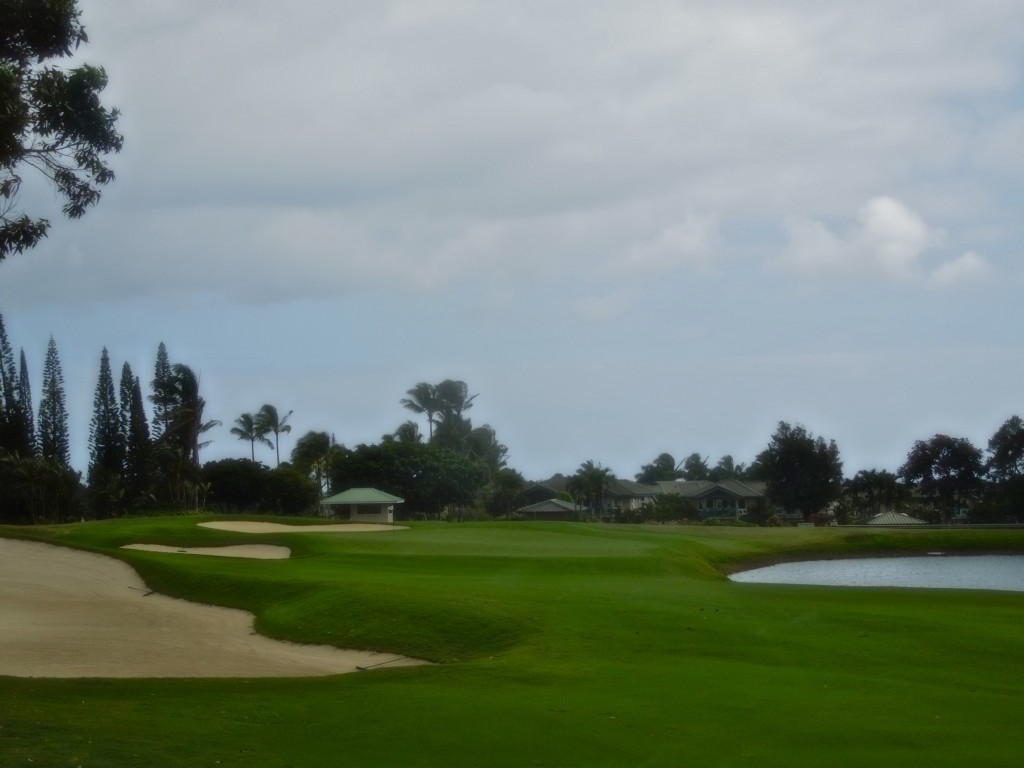