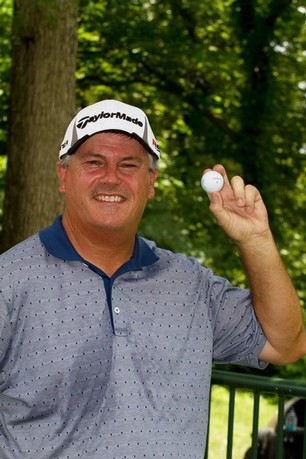 Paul Goydos is only the fourth player to shoot a 59 in Tour History! (Courtesy of Getty Images)

Got to love it when one of golf’s really “good guys” becomes only the 4th golfer in PGA TOUR history, and the first in eleven years to shoot a 59 (12-under par) during the first round of the John Deere Classic.  And how about following that with another outstanding person also shooting his career best with Steve Stricker just one shot back?  You could pair many top amateurs together and few of them could equal, let alone beat either score with their better balls on this course in tournament play.  Who cares that the conditions were soft, and it was a “lift, clean, and place” day as the next best score was 64.

A self-described “journey man,” Goydos sunk over 187 feet of putts taking 22 in all – and they were all dead-center, and he birdied the last three holes to do so.

I had heard of this refreshing man and his kind, considerate, self-effacing personality and seen him, but it was not until last February that I had a chance to chat with him during an Awards Dinner that annually precedes the AT&T National Pro-Am at Pebble Beach.  Not only did Paul impress me as witty, bright, and humorous, but supremely grateful, humble, and accommodating.  Paul “gets it.”  He understands the opportunity he has and the gifts he’s been given.  And it was easy to see why his fellow Southern Californian, Corey Pavin, would choose Paul to be his Assistant Captain in the upcoming Ryder Cup though Paul has never been on the team.

As for Steve Stricker, a Wisconsin golf writer who has known Sticker well for over twenty years told me that if you or someone at your dinner table spilled something, Stricker would likely interrupt his meal at an adjoining table and be down on his hands and knees helping you.  That’s the type of person he has always been and still is.

Goydos understands that one good round does not define a champion golfer, and values his two wins over this stellar day.  Besides, Paul has three more rounds to play and consider this, at least one of these two gentlemen will NOT win this golf tournament shooting such spectacular golf.  Yes these guys are GOOD as the TOUR slogan goes, but some of them also happen to also be REALLY NICE!