Impressions after Day One at the 39th Ryder Cup at Medinah:

Yesterday, I added a Facebook comment saying Phil Mickelson was in top form in his press conference on Wednesday, lending equal measures of thoughtful perspective and humor to various Ryder Cup issues. He also didn’t take the bait from two British tabloid writers who asked him to comment if Rory McIlroy and Ian Poulter were “marked men” by the U.S. team. After Mickelson deftly handled the loaded inquiry, he ended the session by quipping, “Nice try.” Last night at the Media Hotel, I discovered one of the questioners represented The People, a London tabloid based founded in 1881. 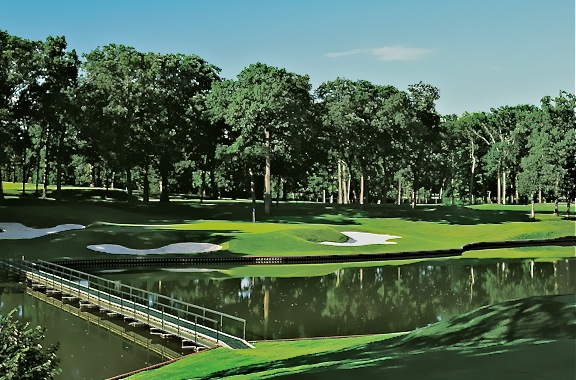 Medinah is in fine shape for the Ryder Cup

Medinah CC is in fine shape and is set up with minimal rough. The weather so far is ideal and is mindful of that glorious week of weather at Oakland Hills for the 2004 Ryder Cup. The extended outlook is dry through the weekend.

With so few players on the course and with such huge galleries, the Ryder Cup remains a tough venue to watch so little actual golf. Instead, spectators have to bide their time and be patient and be rewarded in other ways. Being at the Ryder Cup is about getting caught up in the emotion and excitement of this international team competition. It always delivers an Olympic-like atmosphere and aura, imparting a completely different setting and feel than a Tour event or even a major.

I walked some of the course yesterday and I was disappointed not to see more grandstands throughout the venue. There’s really limited general public seating. I’m checking if the number of grandstands is more or less than at Vahalla or Oakland Hills. In contrast, hospitality suites (villages?) are in plentiful supply throughout the course. There are seven video boards erected on the property but not many near general public grandstands as some of them were at Oakland Hills. A spectator with the Ryder Cup radio ($15—a must item) can hear four different stations: Sirius XM; BBC; Holes 1 & 17 Video Board; and Holes 13 & 16 Video Board.

On Wednesday afternoon when I toured the course, it was gratifying to see some players on the course, even though they weren’t necessarily the Ryder Cup competitors. The PGA of America smartly added a Junior Cup & Friendship Exhibitions of one boy and one girl from both the U.S. and Europe making two teams of 12 players. Included on the U.S. team were: Jimmy Liu who won the 2010 USGA Junior at Egypt Valley in Grand Rapids; lefty Gavin Hall who set a tournament scoring record of 62 at Egypt Valley; and Beau Hossler who was a sensation at the 2012 U.S. Open at Olympic Club.

Concession prices here are not in the Masters’ category for value and affordability but they’re not outrageous, I guess. A hot dog is $5 and bottled water is $3. Bud Light is $5.50 and wine is $8. A grilled chicken sandwich is $9 while whole fruit is $1.50.

The official Ryder Cup program is a pricey $10 but it’s a worthwhile keepsake. Funny, but what caught my eye were two ads: one touted Sea Island Resort with a terrific vintage photo of a young Davis Love III on the practice tee there with his late father; the second also centered on a youthful Captain Love but this time as a college player, courtesy of University of North Carolina proudly supporting its “Tar Heel Alumnus.”

Michigan golf history: The youngest U.S. player in the history of the Ryder Cup remains Michigan Golf Hall of Fame member Horton Smith who competed in the 1929 matches in Leeds, England at age 21 years, 4 days. According to the PGA Media Guide: “Horton Smith, a budding star, played one singles match and switched for the first time to hickory-shafted clubs,” winning 4 & 2 over Fred Robson. In 1934, Smith won the inaugural Masters Tournament at Augusta National. Later in his career, he served as the head golf professional at Detroit Golf Club.

One Response to “First day impressions at the 39th Ryder Cup”