Now that my golf clubs are gathering cobwebs in the basement, there’s time to reflect on the 2016 golf season in Michigan. Putting aside the usual personal disappointments about one’s game, I’ve instead scratched out my annual list of the Top Michigan Golf Stories. Completely arbitrary and in no particular order, I humbly submit the following: 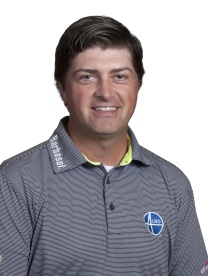 Stuard’s win earned him a spot in the Masters

Brian Stuard wins the Zurich Classic of New Orleans. The Jackson (MI) native and Oakland U. graduate, Stuard became the first Michigander to win on the PGA Tour since Marshall’s John Morse won the 1995 Hawaiian Open. In a weather-shortened 54-hole tourney, Stuard claimed the trophy and the $1.7 million first place check by winning in a three-man playoff on a Monday. With the victory, Stuard also earned a coveted spot in the 2017 Masters.

Oakland Hills, the US Amateur and Nick Carlson shine. Always up to the task, venerable Oakland Hills hosted a spectacular U.S. Amateur, the oldest USGA championship (1895). Hamilton (MI) native and U. of Michigan golfer, the unheralded Nick Carlson was inspiring as he vanquished more accomplished players to reach the semi-finals. If he had only tied Curtis Luck on the 18th hole, Carlson would have reached the finals and joined Stuard at next year’s Masters. Instead, he went down fighting on the 20th hole. Incidentally, the last Michigan player to have reached the Amateur finals was Chuck Kocsis in 1956, losing to Harvie Ward.

Rocco Mediate lifts trophy at Senior PGA at Harbor Shores. As impressive was Mediate’s popular win in record-breaking & wire-to-wire fashion was the news this tournament will be returning to SW Michigan at least four more times—in 2017, 2019, 2021 and 2023. Community-minded Whirlpool Corp. and Kitchen Aid as the presenting sponsor remain all in. 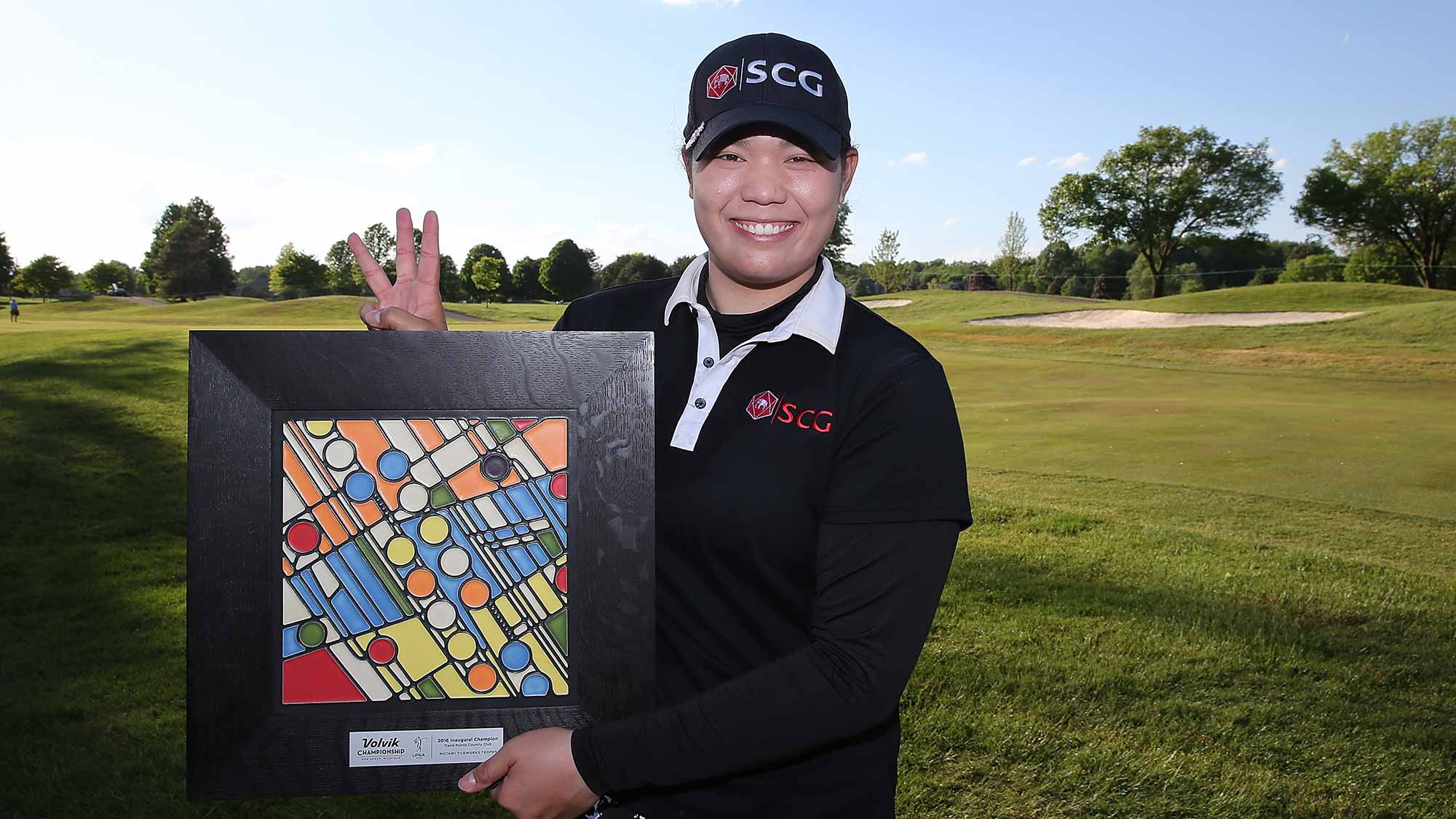 It was the third straight win for Jutanugarn in Ann Arbor

Suzy Green-Roebuck wins the Michigan PGA Women’s Open. By firing a 66 in the third and final round at Crystal Mountain Resort, Green-Roebuck claimed the title by three shots with a 207 total, nine-under par. At age 49, she’s the tournament’s oldest champion and now boasts three Open titles, the last being in 1999—a 17-year, cicada-like gap between victories. 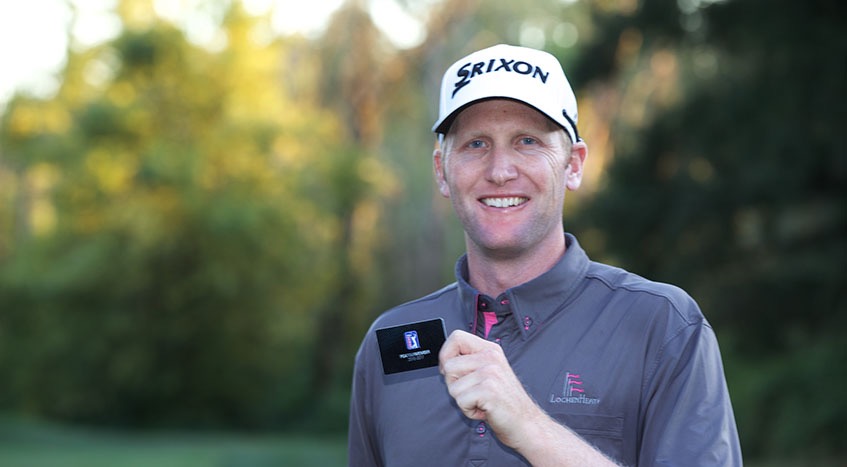 Brehm holds up his PGA Tour card after his win in Portland, OR.

Ryan Brehm breaks through and earns Tour card. The Mt. Pleasant native secured both his PGA TOUR card and his first Web victory at the WinCo Foods Portland Open in August. The victory moved him up from No. 30 to finish fourth on the Webdotcom money list. So far on the PGA Tour’s wraparound season, Brehm’s made four out of five cuts and earned $129,158. 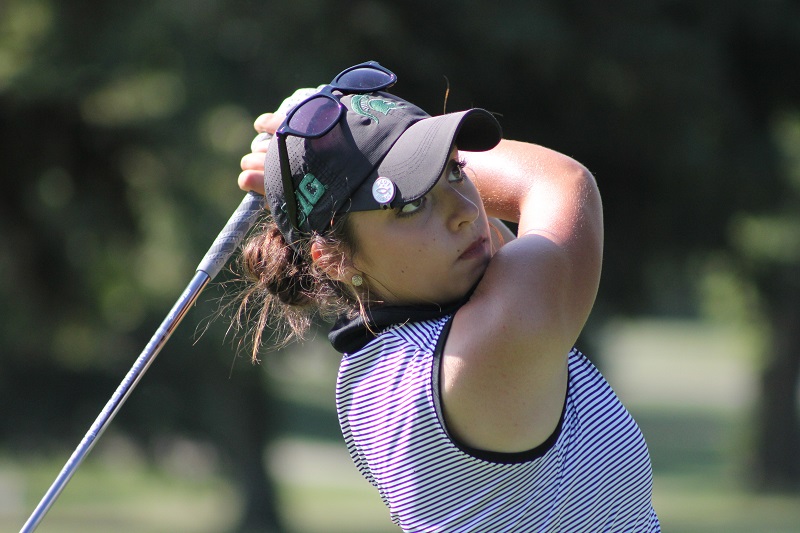 Allyson Geer doubles up in GAM Player of Year categories. In unprecedented fashion, the 18-year-old Geer was named the Women’s Player of the Year and the Junior Player of the Year by the Golf Association of Michigan. Entering M.S.U. next month, Geer won her second consecutive Michigan Women’s Amateur title in August, topped the GAM Junior Honor Roll and was named an AJGA All-American for the second time.

Honorable Mentions: Sherman Santiwiwatthanaphong siezes Symetra stop. Sorry, but I couldn’t resist the alliteration! The 19-year-old Thai native won the Island Resort Championship at Sweetgrass GC in Harris. The boost from the win carried Sherman to five additional top-10 finishes and a 2017 LPGA Tour Card. Other Symetra champions in Michigan were Paola Moreno at the Tullymore Classic and Laura Gonzalez Escallon at the FireKeepers Casino Championship where she shot 15-under par (65-64) in a rain-shortened event.

Finally, Michigan’s four “champions” in the Drive Chip & Putt National Finals at Augusta National in April made their state proud: Traverse City’s Anika Dy (Girls 14-15); Traverse City’s Kyla Layman (Girls 7-9); Jackson’s Colin Norton (Boys 7-9); and Grosse Pointe’s Tommy Sullivan. Although none of them finished first in their division, they all walked away as winners. Layman, however, did have a final putt on Augusta National’s famed 18th green that, if she had holed it, would have earned her the top spot. She ended up third, a mere two points behind the winner. Kyla, there’s always next year and the year after…