What if someone told you about a low profile golf destination favored by Fred Couples and Michael Jordan? Yes, the Fred Couples and Michael Jordan. Well, I suspect you’d want to hear more. So sit back and let me fill you in why Santa Barbara, California—boldly labeled The American Riviera—is emerging as a popular ‘hot spot’ among savvy golf travelers.

Planning our excursion out of Detroit, it was a pleasant surprise to learn Santa Barbara can be reached directly by many major carriers. There’s no need to deal with the hassle of the often unnerving Los Angeles International Airport (LAX). Instead, after connecting with a flight in Phoenix we arrived at the stress-free, compact and user-friendly Santa Barbara Municipal Airport (RE-LAX). 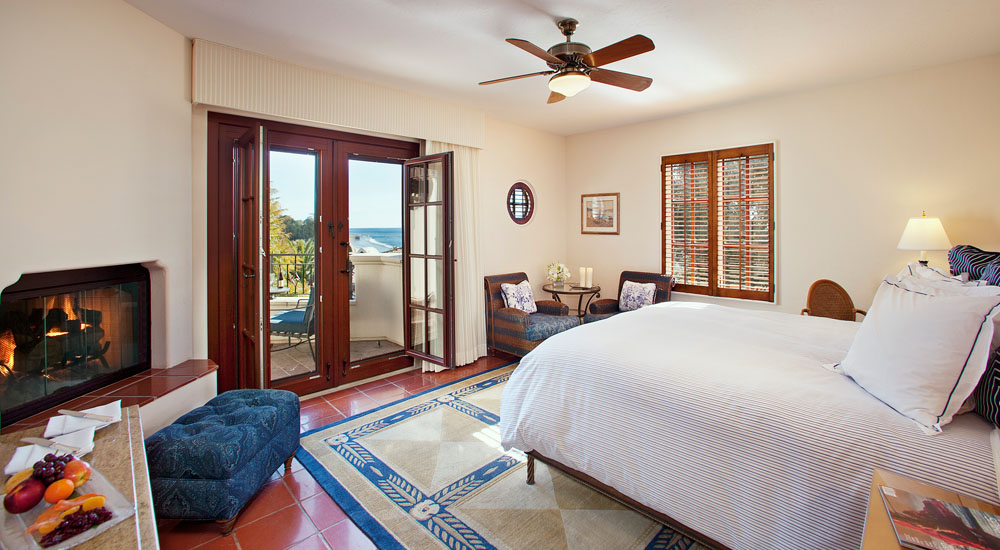 An ocean view is a glimpse away at the Bacara

In all my years of travel, I’ve never had a shorter drive from an airport to a finer full-service resort. The Bacara Resort & Spa, sitting majestically above the Pacific coastline, was only ten minutes away. Serving as an ideal starting point for our trip, Bacara was an oasis of friendly and prompt service and innumerable amenities. With its ambitious, gradual and tasteful renovation, the resort now offers 360 well-appointed guest rooms and suites, each with a private balcony overlooking stunning views of the ocean or flower-abundant gardens.

Inside our room, we found all the comforts of home even if it wasn’t our home—HD flat screen television, patio, expansive shower, tile floors, fireplace and sitting area all in keeping with the resort’s Mediterranean design and motif. But who wants to stay inside even in a luxurious room when the Bacara property is so inviting? Not us—so we took advantage of the 78 acres of oceanfront grounds, beset with comfortable walking paths and trails and with an easy access to the beach. And later we took a dip in one of the three zero-edge swimming pools while marveling at the views of the ocean and the surrounding mountain ranges. To cap off a busy day of travel, we savored the moonlit delights of al fresco dining at one of Bacara’s superb restaurants.

At this point in your reading, you may be asking: “OK, the place sounds wonderful. But what about Fred and Michael?” Let’s talk about Jordan first. For a number of years, MJ has hosted a popular summer basketball camp at nearby University of California at Santa Barbara (UCSB). So while he’s in town every summer for a week or so holding court at UCSB, he’s nicely ensconced at the Bacara due to its ambience and facilities and most importantly its proximity to some wonderful golf courses. Seen recently at the Ryder Cup Matches, Jordan is a golf junkie. 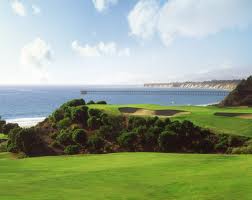 One of MJ’s most frequent golf venues is at the adjoining Sandpiper Golf Club. In fact, sources told me he played Sandpiper eight times during his recent camp stint. After visiting this impressive oceanside and public course, I understand why. It offers excellent conditions, a challenging but fair test and some stunning Pebble Beach-type views on the back nine. And thanks to the high standards set by fellow Chicago native and General Manager D.J. Limardi, customer service is not just reserved for NBA Hall of Famers. “We want our golfers and customers to be greeted with a smile when they arrive at Sandpiper,” said Limardi, a PGA pro who moved to Santa Barbara from the Windy City in 2000. “It all comes down to treating people how you want to be treated.”

The Golden Rule certainly was applied to a foursome of Twenty-Something golfers I met on the 10th tee, as they were making the turn. Coincidentally, it was also their first visit to Sandpiper, a layout designed by William Bell and opened in 1972. “We love it, it’s great and we’ll definitely will come back,” said one of the guys. And these glowing comments were voiced before the spectacular back nine was played.

Holes no.10-14 all deliver an exciting array of golf punctuated by the stunning backdrop of the Pacific. In particular, 13 and 14 pack a special wallop running parallel and high above the beach. Once you play the Sandpiper it’s no surprise Jordan calls it one of his favorite tracks. And let the record state, his best round there from the tips is 72, a Faldoesque round of 18 straight pars.

Oh yes, Fred Couples also played Sandpiper when he lived in nearby Montecito. But it was at Rancho San Marcos, a sister property of the Sandpiper, that Couples made his mark. Also owned by Ty Warner properties, it’s located 15 minutes east of Sandpiper just over the Santa Ynez Mountains and nestled in a lovely valley. Its contrast to Sandpiper and its cooler, breezy and oceanside clime was striking. On the day we visited, the temperature was 35 degrees warmer here than at the Sandpiper, at a toasty 100 degrees. That’s why the best time to visit this Robert Trent Jones Jr. -designed gem is in the spring and fall.

A peaceful golf preserve (no urban development) set within the historic (1804) Rancho San Marcos ranch, the layout boasts two distinctive “feels” for its nines. Settled down in the valley, the front side invokes a fast and firm links design while the back winds its way up and around a mesa. To give you an idea about the topography, the 15th hole—the highest point on the course—sits 550 feet higher than the ranch-style clubhouse. 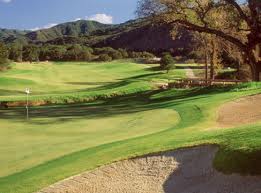 Besides the scenery and tranquil setting, Rancho San Marcos’ added appeal is its top-drawer conditioning. Following a smart renovation completed in 2008, the course is now grassed with wall-to-wall bermuda, delivering an optimum playing surface for hot and arid conditions. The bunkers were renovated as well, now sporting new liners and handsomely dressed with Augusta National-like crushed white marble. In sum, the course looked and played admirably especially with the greens kept smooth and quick and set at a constant 11 on the stimpmeter.

A frequent visitor to Rancho San Marcos in past years, Couples had the course record of 64 for a number of years. But it’s since been eclipsed  by a shot by California PGA pro Roger Kennedy.

We stopped and chatted with one couple on the back nine and asked them for their thoughts on the course. “We love it here and try to play it every time we’re in the area,” said the gentleman. “The scenery is so special and we like the the fact it has six par threes and five par fives. It’s unique and fun and we always come back.”

Head golf professional Kyle Oliver said a popular golf itinerary for those visiting the area includes Rancho San Marcos, the Sandpiper and La Purisima, a highly regarded Robert Muir Graves design located 30 minutes north of Santa Barbara. “A typical schedule will be Friday at Rancho San Marcos, Saturday at La Purisima and then the Sandpiper on Sunday since it’s so close to the airport,” said Oliver.

Yep, veteran golf travelers like their airports close by and easy to manage. Because when it comes to Santa Barbara, the coming and the going is almost as good as what’s in between.