After a recent round with two chip-ins for birdies and several other up-and-downs for pars, my playing partners were asking me, “Hey, what’s going on with your short game?”

I had to confess, “I watched a Phil Mickelson DVD and it gave me a system.”

Over the years I’ve often found immediate success in a particular part of my game whenever I picked up a helpful instructional article or video. My theory is that a good instructional article or video concentrates the player’s mind and lends a positive and assertive element into shot-making. In other words, having confidence in the method is as important as the method itself. 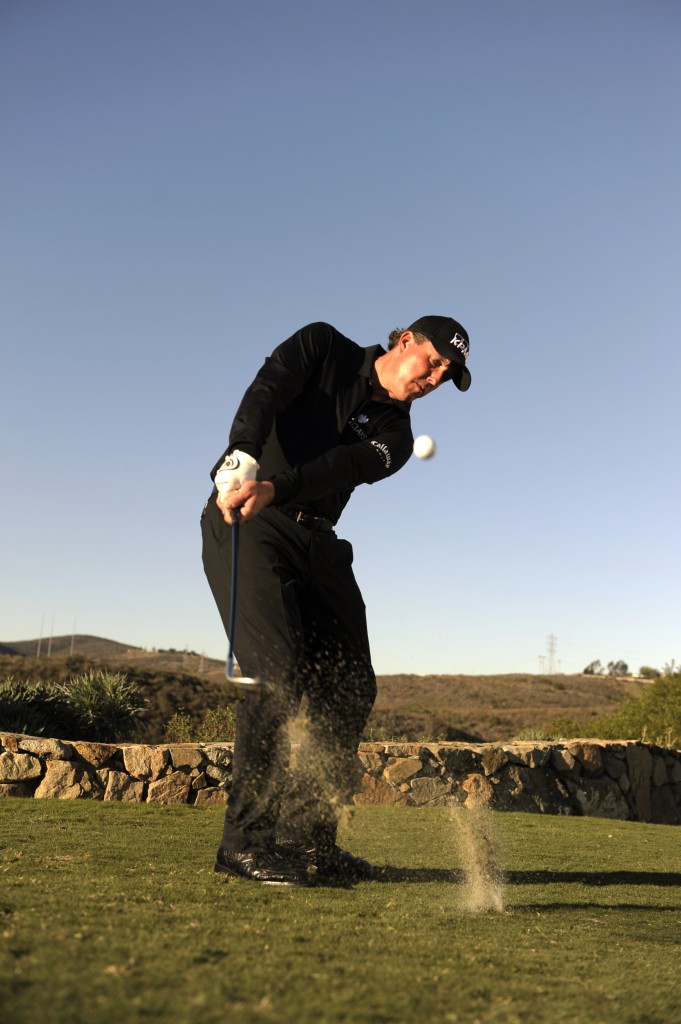 'Hinge and hold' is the key tenet of Mickelson's chipping method

Such was the case with this DVD, produced by Jastrow Productions, and running just over an hour. There are two DVDs in the set. One focuses on putting and chipping while the other provides tips on flop shots, bunker play, and specialty shots. The meat of the instruction is found in the first DVD.

I found the most helpful section to be one devoted to chipping. Mickelson espouses the “hinge and hold” method. Essentially, he recommends a slight wrist cock, or hinge, in the takeaway—allowing for a steeper descent—and then a crucial “holding” of that wrist angle through and pass impact.

What’s particularly refreshing about this section is how Mickelson quickly and unequivocally dismisses alternative chipping methods, such as the stiff or rigid wrist method. He says “run away as fast as you can” from any teacher suggesting such poppycock. Both elements of the “hinge and hold” method are equally important. “Hinging” makes sure the player is hitting down at the ball and it also imparts backspin on the ball which lends more speed control once on the green. “Holding” ensures the player accelerates through the shot, an absolute must-do tenet of good chipping or putting. In fact, acceleration or having the hands “continue to the target” remains a constant for putting, chipping and bunker play.

The putting section offers effective advice as well and its theories, as noted, dovetail nicely with the chipping section. There are several good tips imparted by Mickelson in this section. One is a full explanation of his “three foot circle drill.” Citing Dave Pelz research, Mickelson says “we can make 97 to 100 percent of our putts” within a three foot distance. But if you move back only one foot, that percentage drops below 90 percent. So consistent and successful lag putting is vital for reducing three putts. Mickelson creates a three foot circle and then practices getting his long putts inside that target. For me, it brought back junior golf memories where my dad told me to visualize a bushel basket around the cup and challenged me to get my approach putt inside it.

Mickelson also reveals a tip from former Masters champ Jackie Burke Jr. Burke suggested the 25/75 rule, meaning taking his stroke back 25 percent and through 75 percent. Over the past few years, Mickelson’s once long pendulum stroke has been made more compact and crisper thus reducing deceleration. I only wish Mickelson would have commented on the elements of maintaining ‘tempo’ with the 25/75 method. The compact stroke has a tendency to get too quick at times.

The production values of the DVD are first rate. Lighting, sound and editing elements are what would be expected from someone like Terry Jastrow who for years was the executive producer for ABC-TV golf. The only distracting element was when Mickelson would be looking at a new camera angle and there would be a slight delay in the camera switch. But this was a minor irritant.

Best of all, the DVD set comes with a handy 10-page booklet that can be taken out on the range and provides a synopsis of all the good advice and reminders found on the DVD.