Although a longtime Michigan resident, architect Tom Doak has lent his name to only two courses in the state. He had a third, his inaugural High Pointe in Williamsburg (1989), but it closed several years ago and now lies fallow off M-72 not far from Grand Traverse Resort. So today golf’s hottest architect (apologies to Gil Hanse) can only claim a pair of courses in his native state: Black Forest, a resort course in Gaylord (1991) and Lost Dunes, a private course in Bridgman. Recently, I played Lost Dunes for the third time since it opened in 1999 and my only regret afterwards was waiting so long to visit it again. Here are a ten reasons why I’ll be returning—if permission granted— sooner rather than later in the years ahead. 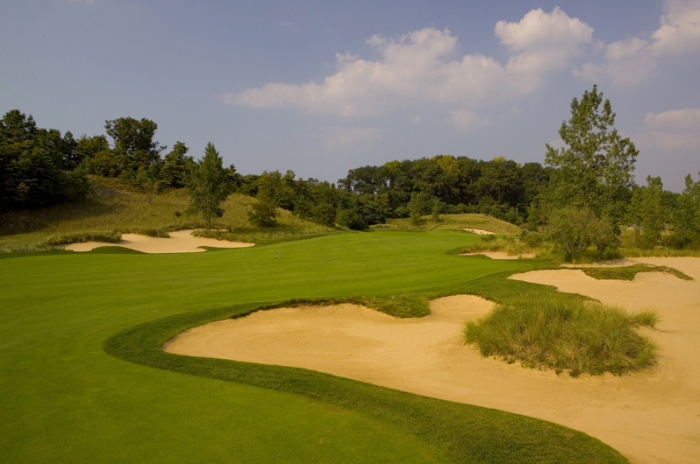 Intriguing site: Near the Michigan-Indiana border, Lost Dunes is situated on an abandoned sand quarry and bisected by an ever-busy I-94 interstate. But due to Doak’s genius, this mundane and noisy landscape has been transformed into a beguiling, challenging golf experience. And as one devotee of Lost Dunes labeled the din of the highway traffic, it’s merely “urban surf.”

Friendly starting hole: It always irks me when a course opens with a difficult starting hole. Sure, sometimes it’s inevitable but it should be avoided at all costs. Here, the first hole is a gentle, less than 400-yards, opener that moves play along without undue delay. Pars and a few birdies are always a nice way to start the day.

Wide fairways: The fairways are big and wide so most golfers will get off the tee in fine fashion. Forced carries are also kept to a minimum. Member enjoyment is paramount.

Open approaches: Most greens welcome a running shot and are not blocked by yawning bunkers. The key is distance control with one’s second or third shots because the contoured greens are demanding.

Movement in the greens: Doak nicely counterbalances the flat terrain with an extra dash of roll and contour on the putting surfaces. In one article, he confessed whenever he plays Lost Dunes his primary goal is not to have a three putt. I can relate to that. Yes, the greens require a deft touch, especially if one doesn’t find the right quadrant with one’s approach shot, but they’re not over the top.

Conditioning: Superintendent Steve Jotzat has the course in tip-top shape with nary a blade of grass or grain of sand out of place. Owner Jeff Shearer provided ample resources for Jotzat and his staff to get the job done right and it’s apparent throughout the course.

Forecaddie: For some, a downside to Lost Dunes is that it’s a tough walk although Doak almost always walks and carries his own bag when he visits. But a nice compromise is the forecaddie option whereby he can drive the cart and allow members and guests to enjoy the course more on foot. That’s what we did and “Charles” proved not only a helpful guide but also a friendly companion for the day’s journey.

Strategic choices: I like how Doak’s design requires some smart choices to score well. Case in point is the reachable par-five 10th hole. At 480 yards from the white tees, a good drive leaves one facing a decision to go for it, over a creek, or to lay up for one’s third. However, laying up means also playing from the correct angle to best hit the sloping green. To do so means placing one’s second shot down the left side of the fairway in order to have the best angle to the tough green. A similar dilemma resides at the uphill par-five 15th hole where a flat third shot is found 100 yards or so short of the green.

Getting it right the first time: A good sign of a layout’s solid design is that it holds up over time without a lot of tinkering. Head PGA pro Pete Han says Doak returns annually but has only slightly tweaked Lost Dunes over the years. A tree has been removed, a minor bunker change here and there have been the extent of the revisions. Doak got it right the first time.

Clubhouse: This is a huge man-cave with cathedral ceilings and expansive windows providing scenic views of the course. Photos, drawings and memorabilia all lend themselves to paying homage to Chicago’s and nearby South Bend’s sports icons so if you love the Bears, the Blackhawks and the Fighting Irish you’ll feel right at home.

But come to think about it, anyone who loves golf feels right at home at Lost Dunes.