It’s been almost twenty years since I’ve visited Palm Springs, California. And after being there last March and having a delightful but all too short stay, I promise not to wait so long to return. In this age of frugality and wallet-tightening, my goal was to experience the best ‘bang for your buck’ in this desert oasis widely known for annually hosting the Bob Hope Classic. Partial to munis and true public play layouts, I settled for Indian Wells Golf Resort, home to two fine courses, the Players and the Celebrity.

The city of Indian Wells has offered municipal golf since 1986 but five years ago it launched an ambitious and expensive renovation of both courses that also included a stunning new clubhouse that’s quite simply a ‘state of the art’ statement in design and amenities. The West Course, as it was known, was transformed into the Celebrity Course by designer and former European Ryder Cup player Clive Clark. With spectacular views of the San Jacinto, Santa Rosa and San Bernardino mountain ranges as well as Eisenhower Mountain, the Celebrity course is a beauty with its rolling, verdant fairways, impeccable greens, palm trees and lots of rushing water from streams and waterfalls. In a neat acoustical touch, the waterfalls act as a natural sound barrier or ‘white noise’ to combat neighborhood traffic that abuts the course. Another trademark of the layout is its meticulous floral plantings and landscaping. 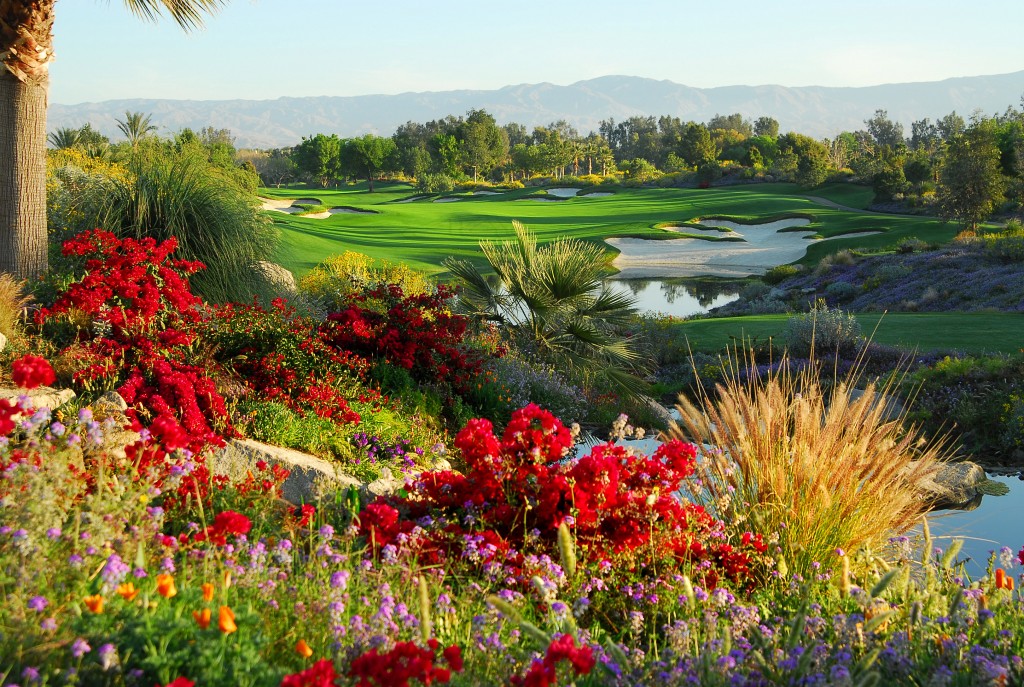 Floral beauty is a visual treat at the Celebrity Course

In short, the course is very pleasing to the eye and ear and offers all the challenge one would seek with five different sets of tees nicely apportioned. The par-fives are particularly strong at the Celebrity. The 14th is especially inviting. Although prudent play would suggest three smart shots to the putting surface, a long drive does set up for a risk/reward second shot for a chance at an eagle. But along the way, lurking bunkers and ponds must be skirted to reach the green with a majestic mountain range in the background. It’s a wonderful golf hole that sums up a top notch course that was worthy of two televised Skins Matches. 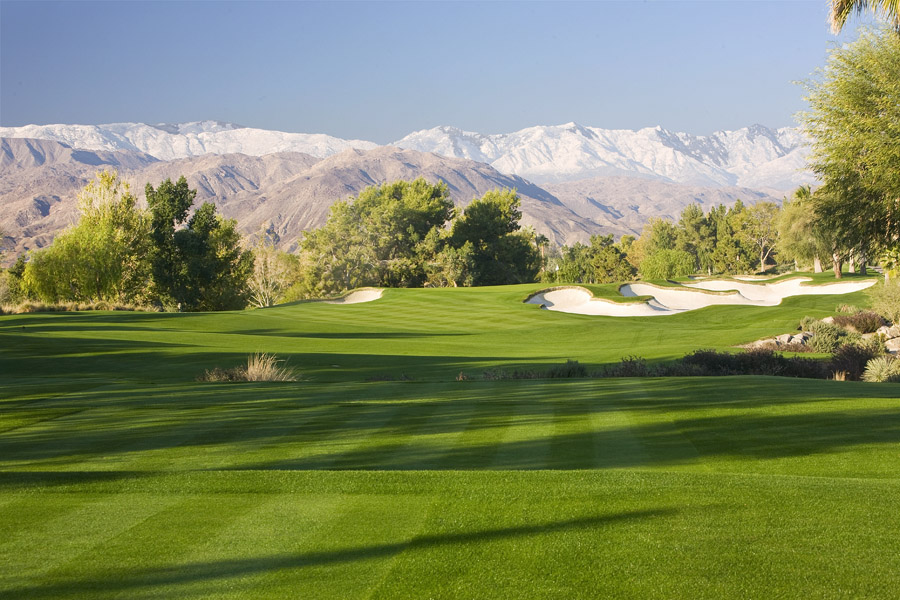 Mountain ranges serve as a scenic backdrop at the Players Course

And the East Course, now dubbed the Players Course, is no slouch either. It has a different look and feel than its well-coiffed sister course but it offers the same captivating charm. Former Tour player turned designer John Fought oversaw the re-do here in 2007 and it’s impressive. First, the layout is void of any intrusive homesites and condos common for courses in Palm Springs. So there’s a special feeling of isolation and privacy not usually found at a muni in the middle of a busy city. Second, Fought added some neat classic design touches such as long rectangular tee boxes and large sculpted bunkers in the manner of Riveria and Winged Foot. Retained throughout the layout are large mature trees that help to define the wide corridors. And on several holes, a barranca must be negotiated en route to the green. And considering its heavy play, it was in remarkably excellent shape with healthy fairways and smooth putting surfaces. Probably the only downside to the Players Course is how it finishes. The par-four 18th is a tight and penal par-four more suitable to better players given its no. 2 handicap rating. Not only does the drive have to be long and true but the second shot must avoid a huge barranca guarding the elongated and narrow green. It would be better to make the hole a reachable par-five and to allow for fewer doubles so as not to ruin an otherwise splendid golf experience. (Note: Recently the course has reduced the carry over the barranca so now the second (or third) shot has less distance to reach the green.)

Managed by Troon Golf, Indian Wells Resort knows how to expertly manage heavy play (80k rounds per annum) as well as group business with a customer friendly ambience. I particularly noted how all the carts, assembled for a big outing, had colorful hole signage on their rooftops, to make it easier for players to find their assigned cart. A smart little touch I hadn’t seen before.

The award-winning clubhouse, at over 53K square feet, is something else. Without question, it’s one of the best I’ve encountered for class and amenities. It has an expansive pro shop as well as a Callaway Performance Center that will pinpoint the ideal set of equipment via club and ball fitting. And there’s ample dining and meeting space, with state of the art A-V, to handle group and business meetings. 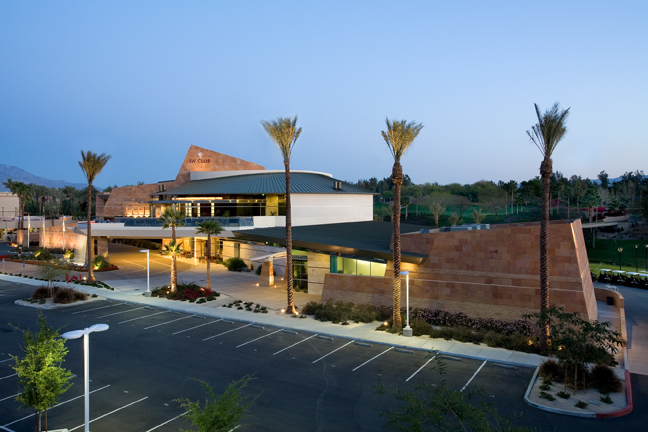 The IW clubhouse: a golfer's oasis of amenities

But our favorite spot was the second floor outdoor patio area which overlooks the golf course and the scenic mountain ranges. With a gas firepit as conversational centerpiece, one couldn’t find a better spot to marvel at the surroundings while rehashing the scorecard. And given our first time visit, we had the good fortune to be paired with a married couple and avid golfers both retired from the LAPD. In fact, afterwards, I joked that were so friendly and courteous that I accused them of being “undercover agents” hired by Troon management to guide and entertain us. But instead they were simply an affable couple who shared a passion and love for the game and we were lucky to spend a round with them. Being paired with such individuals is one of the hidden and priceless pleasures of golf travel.

For accommodations, we opted for the nearby Hyatt Grand Champions Resort. For convenience and with no hassles, it more than met our expectations. And the staff was particularly responsive and helpful. This is a comprehensive resort with myriad pools, a first-class spa and exercise center along with bike and jogging trails. The only quibbles were an unsightly stain on our room’s carpeting and a faulty television set. (Note: request a room in the new section.) But all in all, the Hyatt provided us with a comfortable and well-appointed stay.

If you headed to Palm Springs for business or pleasure, be sure to include Indian Wells Resort in your plans. It’s the people’s choice.