I had plans for a winners and losers column (shame on me) about the Ryder Cup. I was going to mention the faulty and garish rain gear and golf bags, the wet Wales weather, the nifty “audible” on the revised schedule, slow greens, a driveable par-four, and player performances over the four-day affair. 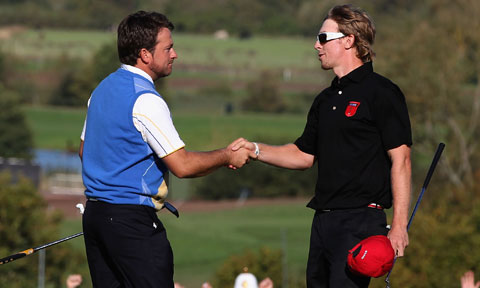 The Ryder Cup came down to the last match between McDowell and Mahan.

But after watching Monday’s post-match media conference with the somber USA squad, I scrapped those superfluous comments. You may have watched snippets of it on ESPN and the Golf Channel but I would strongly urge you to watch a lengthier 16 minute excerpt available online at the Golf Channel. (Just Google “Tough pill to swallow” + Golf Channel.) This Q & A session provides one of the most revealing insights into what makes the Ryder Cup such compelling, emotional and unparalleled competition. And as much as it painfully exposes the hurt felt by Hunter Mahan as he tries to absorb the loss of his pivotal and enormously stressful final match against Graeme McDowell, it also magnificently unveils the unwavering support of his fellow teammates. There are many telling moments in this news conference.

First, there’s the early question to Mahan who is so choked up with emotion he can’t continue.

Instinctively and as if jumping into a pool to save a drowning swimmer, Phil Mickelson takes hold of the microphone and picks up the answer.

“We are all proud to be part of this team,” said Mickelson, giving Mahan a pat on the back. “We came within half a point. But we could look anywhere throughout those 28 points for that half a point.”

But Mickelson also talked about his own failings during the matches and how he didn’t deliver on the expected leadership of winning play. It was a candid self-assessment by the world’s third ranked player but it also provided needed solace and perspective for his teammate. It was an impressive moment of team solidarity and compassion.

Later Steve Stricker also lent his perspective. “We can all think about a shot here and there that could have turned the match to make up that one point,” Stricker said. “You hate to see Hunter go through what he’s going through because it really shouldn’t come down to that. But, unfortunately, it did.”

And then Stewart Cink picks up on Stricker’s comments and adds, “If you go up and down the line of the tour players in Europe and the U.S. and asked them if they would like to be the last guy to decide the Ryder Cup, probably less than half would say they would like to be that guy and probably less than 10 percent of them would mean it,” Cink said.

And then the USA team breaks out in applause for Cink’s remarks about Mahan. What a stirring moment.

Before the matches began, Captain Corey Pavin asked Major Dan Rooney, the celebrated PGA golf professional, Air Force fighter pilot, and founder of Patriot Golf Day, to speak to the U.S. team. Rooney, whose parents own Grand Haven Golf Club in Michigan, spoke to the players about the importance of the team unit and how accountability to one another is vital.

After watching this sensational Ryder Cup Match and especially the emotional news conference at its conclusion, it’s evident the U.S. team took Rooney’s advice to heart.

Never have such fallen golf heroes stood so tall in defeat.

Note: Image courtesy of Getty Images and the 2010 Ryder Cup.