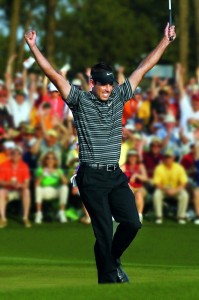 In the crucible of the final nine holes, finishing off a major championship in style is a mark of a champion. Unheralded Charl Schwartzel certainly did that with a record-setting run of four birdies on his last four holes at the Masters. But how he started off on Sunday was equally remarkable. His 30-yard chip-in for birdie at the par-four first was only the second birdie on that ‘sneaky tough’ hole for the entire final round! And then to top that, two holes later he canned a 114-yard wedge for eagle, doing another “Larry Mize,” raised to the second power. Yes, one could say Schwartzel had some “lucky” bounces but that’s inevitable in the course of any tournament. He just had his good bounces in the stretch of the first three holes of the final round of the Masters. But making four clutch birdie putts on his final holes really makes these “but what if” discussions a silly exercise. No one lost the Masters, including Rory McIlroy. Schwartzel simply won it in blazing glory.

Looking at Schwartzel’s stats for the week revealed the following: Although overall he was T-18 in the all-important greens in regulation category he was T-1 for the final round with 16 GIR. In putting he was second best for the week with only two three-putts. In driving accuracy, he was T-31; on Saturday Schwartzel only hit 6 fairways yet still fired a 68!

Schwartzel’s win means all four of golf’s major trophies are now in the possession of non-Americans with two players from South Africa, one player from Northern Ireland, and one player from Germany all laying claim to the prizes. Call it the Global Slam. That’s fine with me and it’s really no surprise given how golf has evolved. I liked what Schwartzel said after Saturday’s round when asked about the seven international players gathered on the 54-hole leaderboard: “It’s just a bunch of really good players coming through. The world is big. America is big, but the world is bigger.”

Indeed, we all like to root for more familiar players we see on the PGA Tour but golf is now played on a global stage. On this note the one edge players from other continents have over American players is that they compete in events that are, by and large, not as deep in overall competitive talent as the PGA Tour. As such, their chances for victories are slightly better than their American counterparts. Hence, winning begets winning and such positive outcomes instill vital poise and confidence especially during a tense final round.

Finally, if one is truly happy about golf becoming an Olympic sport in 2016 in Brazil, one should be equally pleased about Charl Schwartzel completing the Global Slam. As best-selling author Thomas Friedman might write, The World is Flat, Hot and Crowded with International Winners.