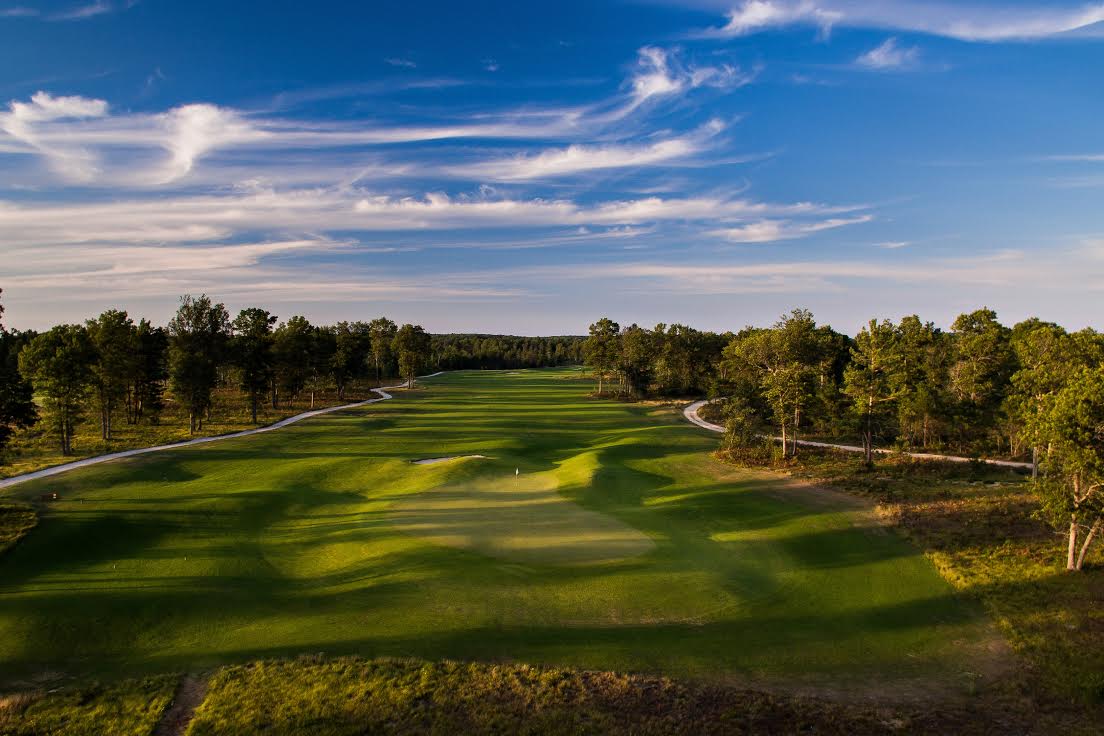 Golfers are in for a priceless surprise at The Loop

It was Brian Cairns, one of the Michigan PGA Section’s top players and a newly inducted member of the Michigan Golf Hall of Fame, who finally prodded me into scheduling a long delayed tee-time at The Loop, Tom Doak’s reversible layout at Forest Dunes. During a rain delay at this summer’s Michigan Senior Open, we struck up a conversation and he told me he had recently played the award-winning design (Golf Digest’s Best New Public Course for 2016).

“It’s simply the best course in Michigan,” said Cairns. “It’s truly amazing and a lot of fun to play.”

That was high enough praise for me to get off my duff, recruit some of my Saturday morning golf cronies, and arrange a stay-and-play package at Forest Dunes. In truth, I’ve had several opportunities to visit the course in the past, including some buzz-generating, “sneak preview” media invitations. But I’ve learned it’s often advisable to be more patient and to give the new layout more time to mature. You simply can’t rush Mother Nature given the slower and shorter growing climate of northern Michigan. Besides, I knew the quality of The Loop’s turf and conditioning would be essential elements of its strength and appeal.

The long and short of it: the wait was worth it. Like Cairns, I was smitten by the playing experience and marveled at the thinking and ingenuity imbedded in its design.

By staying on-site at a two-bedroom Villa, our foursome played on successive days The Loop’s Red and Black courses, played counter-clockwise and clockwise respectively. As part of the stay-over package, we availed ourselves of the complimentary push carts and relished the “walking only” experience. Heading down the first fairway, one of my favorite golf sayings popped into my head: “Golf cars often ruin the journey of the game.” 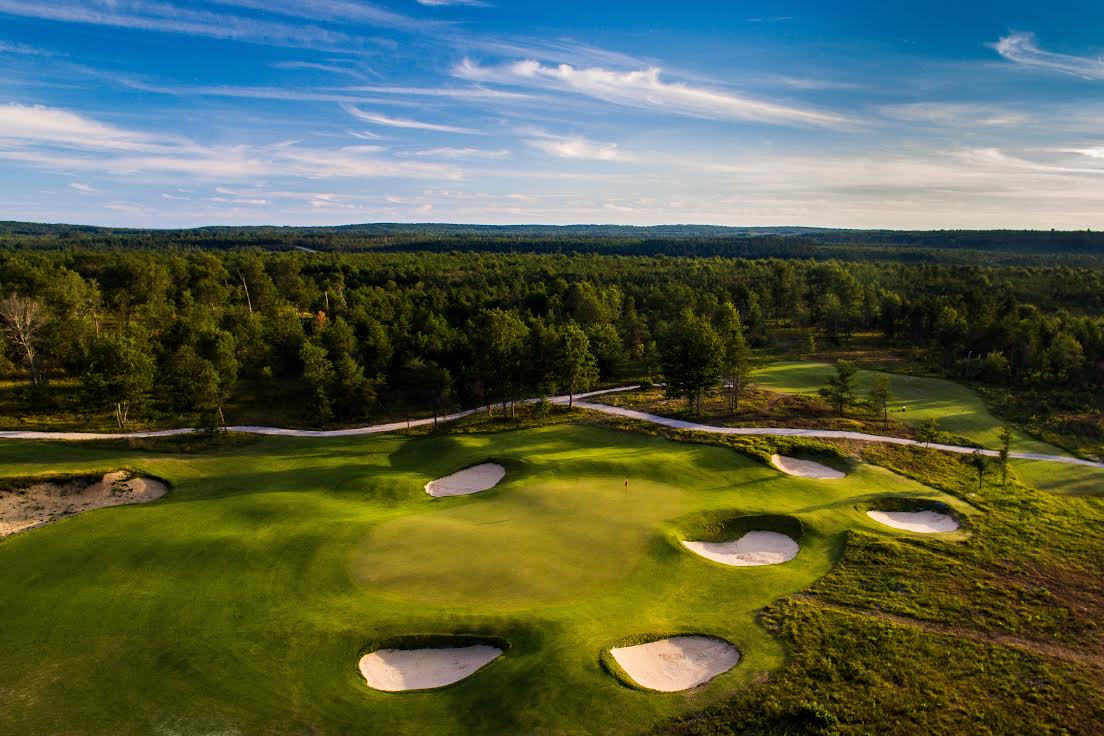 And The Loop is a journey best enjoyed and appreciated with a more relaxed and thoughtful (without being a tortoise, of course) approach to the shot or putt at hand. In hindsight, our group probably should’ve hired at least one caddie to help guide us in our deliberations. Instead, we fumbled around at times and misjudged some holes due to our ignorance and inexperience. However, we did rely on—belatedly—the handy and gratis course booklet, expertly organized and composed by Doak and his Renaissance Golf Design. Like The Loop itself, the booklet is cleverly designed as a two-in-one package—depending upon whether you’re reading about the Red or the Black courses. So here’s one quick tip about The Loop: make sure you grab a booklet, along with hole locations handout, and read them before each hole.

To not spoil the priceless surprise posed by The Loop, I’m foregoing any hole by hole narrative or so-called signature hole descriptions. Not that the reader would recall these meager words anyway. Instead, I’m suggesting a clear, open, unvarnished mindset while playing it. A little intrigue and mystery make for good reading but also for good golf. Didn’t Agatha Christie say that?

However, I will share some post-round comments from my pals as we gathered for a hearty meal and generous liquid libations inside the impressive Forest Dunes dining room:

“The greens were smooth and fast and fairways were bouncy and firm, like the best Irish links courses.”

“The land is huge and expansive with several impressive vistas yet not overly rigorous for a walking only course.”

“It’s so quiet and peaceful and its remoteness, like Forest Dunes itself, is almost eerie.”

“The bunkers are well-placed and the quality of the sand is excellent. But the waste areas can be brutal.”

“Visually, the fairways looked young and immature yet they still played fine with few if any crummy lies.”

“Off the fairways, the roughs and gnarly thickets are still a work-in-progress. Searching for balls should become easier with more clearing and grubbing out. Meanwhile, stay in the fairway!”

“Given its links-inspired design, yardage marker should be to the front of the green instead of the middle. You’re smart to play it short and run it on.”

“How the heck did Tom Doak and his team figure this all out?”

Our group also discussed The Loop’s resistance to scoring. It’s not a walk in the park. While the landing zones are generous, it demands precise shot-making and, as mentioned, a solid short game. Incidentally, Cairns is known for his short game prowess; he’s a maven at getting the ball into the hole. In particular, it requires experience if not an appreciation for links golf, where imagination, touch and seeing the proper angle and line are all critical factors for tackling the course. (One of our golfers said, “The Loop will spook many golfers not prepared for it.”)

But if you possess none of these traits, you’ll still have an upbeat round so long as you’re not overly scorecard conscious. As I tell those embarking on their maiden overseas golf trips to Ireland or Scotland, play the Stableford or match play format and don’t get too frustrated or dismayed by aggregate scores.

What’s particularly captivating about The Loop is its timeless allure, like it’s been there for a generation. This is a result of Doak’s famed minimalist design philosophy where inviting and smart golf holes are discovered and carefully shaped using the natural contours of the land. As the lauded golf course architect from Traverse City has written, “We take any edge of disturbance, be it a clearing line or the end of a section of major earthwork, and strenuously examine and finesse it until it is blurred beyond recognition. This is the key to producing a new course that looks like it’s been there for 100 years.”

Darn glad it didn’t take me that long to get there.

For more information about The Loop, including its stay & play packages, visit www.forestdunesgolf.com