According to VISION54 founders Lynn Marriott and Pia Nilsson, heeding that simple piece of advice is at the heart of playing better golf and enjoying the game more, especially among competitive players. Presenters at the recent PGA Teaching & Coaching Summit in Orlando, Marriott and Nilsson—both rated in the Top 50 list of teachers by Golf Digest— provided a fast-moving and insightful overview of their holistic approach to coaching and teaching golf. They urge their students to write down their thoughts to this basic question: What do I do to play great golf? “We want our students to be curious and alert about how they play the game, said Marriott, “and they need to keep track of it and write it down.”

Fortunately, I had my own notebook when listening to Marriott and Nilsson and I readily jotted down a host of Vision54 (the name is derived from the goal or vision of 18 birdies in a round) tips and life lessons. Here they are: 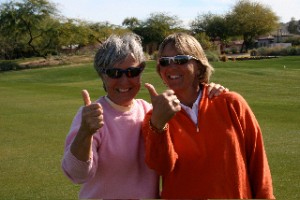 Listening to the core values of Vision54, I recalled how world-class player Rory McIlroy was in an early season funk last year on the PGA Tour. Then he decided to fly home to his native Northern Ireland and play several rounds with his father at the storied links of Royal Country Down. Batteries recharged by the essence of links golf and the game itself, McIlroy returned to the U.S. and promptly won the Quail Hollow Championship in Charlotte, N.C., punctuated by a course record and a sensational final round of 62, ten-under par.