This week the PGA TOUR stops at the Zurich Classic of New Orleans. I’m intrigued about this tournament for several reasons. In 1964, Michigan club pro Glenn Stuart had the final round lead and almost won the tourney, then called the Greater New Orleans Invitational. Then in 2016, Michigan’s Brian Stuard won his first PGA Tour tournament here in a rain-shortened 54-hole event and it changed his life. It’s now a two-man team competition which makes it unique on the Tour. Last year, it was won by Scott Piercy and Billy Horschel. Third, the event is held in Louisiana, a state I finally visited earlier this year. Although I didn’t make it to New Orleans due to the hubbub of Mardi Gras, I did travel with my spouse to Baton Rouge, the state’s second largest city.

Baton Rouge is about a 90-minute drive north of Avondale, the site of this week’s tourney. Recalling grade school geography, you should know BR is the state capital. You’d think it’d be New Orleans, the state’s largest and best known city, but legislators opted for Baton Rouge because it’s located on the first set of bluffs north of the Mississippi River Delta’s coastal plains. Unlike the Big Easy (no, not Ernie Els), Baton Rouge isn’t prone to flooding.

Although not as glamorous as New Orleans, Baton Rouge is a worthy alternative to its better known metropolis. Being history buffs, we found Baton Rouge (French for “red stick”) to be rich in significance and heritage. And the food and dining were grand. Here are some of our top stops and attractions. 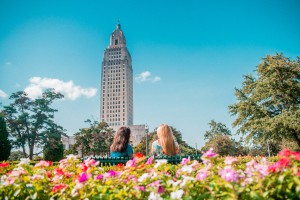 Louisiana State Capitol—A contestant on Jeopardy might buzz in, “What’s the tallest state capitol in the U.S?” And Alex would say, “Correct!” During the Great Depression, Louisiana Governor Huey Long built this grand edifice that’s 34 stories tall and sits on a 27-acre tract. Requiring 2500 rail cars to carry the limestone and marble for the construction, it was built in only 14 months. Besides the Chambers and Memorial Hall, the observation deck on the 27th floor is a must-see spot. From there, you get panoramic and breathtaking views of Baton Rouge and the Mississippi River. One of the most colorful and controversial figures of the day, Long was assassinated outside his office in 1935 and is buried at the center of the garden fronting the capitol.

Capitol Park Museum—Many locals say this is their favorite museum in the state. Since we love history, it certainly filled the bill. The legacy of Huey Long is displayed and a comparison to Michigan is warranted on one topic. Long promised to upgrade the state’s roads and bridges and he delivered. During his short four-year tenure, he added 2,500 miles of paved roads, 1,308 miles of asphalt roads and initiated several large bridges. And this was during the Great Depression! As a civil rights milestone, we learned about the success of the 1953 Baton Rouge bus boycott which inspired Martin Luther King, Jr.’s desegregation efforts in Selma, Alabama two years later. Other displays of note included exhibits on Jazz, Slavery, and Mardi Gras (with lavish costumes), a rare Civil War submarine and an expansive Louis Armstrong exhibit.

Louisiana’s Old State Capitol—Sited on a bluff overlooking the Mississippi, this National Landmark building contains an impressive stained-glass dome and spiral staircase and is a walk back in time. To help with the time travel, there’s an excellent 12-minute film—The Ghost of the Castle—that uses 4D immersive technology to tell the story of the building. It’s one of the best uses of technology we’ve seen for state history.

Mike the Tiger Habitat at LSU

Louisiana State University—Baton Rouge is home to LSU, the state’s largest university and a member of the SEC. Besides a short stroll around the campus and a tour of its bookstore, we visited “Mike the Tiger Habitat.” This is the lavish zoo-like domain of LSU’s mascot, Mike V, a fierce-looking and live Bengal Tiger. Mike is usually agreeable to pose for selfies behind his well-fortified barriers.

Other considerations—Time prevented us from other diversions although we enjoyed a walk along the riverfront which included a quick peek at the USS Kidd Veterans Museum, home to a WW II destroyer, as well as the nearby Louisiana Art & Science Museum. We also made a brief stop at the Magnolia Mound Plantation, a well-preserved 18th century plantation offering insight into the ante-bellum period. Dining—For morning coffee and breakfast, the downtown Magpie Café was a smart and convenient choice. For a cocktail at dusk with a spectacular view of the Mississippi, the Tsunami Sushi restaurant on the 6th floor of the Shaw Center was a delight. And for dinner we stayed close to home at The Watermark Hotel. See below. Where to Stay—It would be hard to match the ambience, history, service and centrally located convenience of the Watermark Hotel, part of Marriott’s elite Autograph Collection. Its preserved architecture is an attraction in itself. Built in 1927 as one of the city’s first skyscrapers, it began as the headquarters for the Louisiana Trust & Savings Bank. Its design has a mix of Art Deco and Greek Revival and includes stunning murals and carved marble walls. Better yet, the  original bank vaults have been preserved and serve as a unique meeting space. Special thanks to hotel staffer Bill who provided us with a special tour and history lesson of the vault.. Our room was spacious and well-appointed and surpassed our expectations. The large marble shower was heavenly. Again, the preserved design touches in the room and hallways were well-done. As far as dining, we had an affordable dinner at the bar one night after we played a game of Scrabble in the magnificent lobby. There’s also award-winning cuisine at The Gregory, the hotel’s  flagship dining option. We took advantage of the hotel’s free shuttle service to buy some items at a local market. All in all, Watermark was a winning accommodations choice. The Bluffs on Thompson Creek

Where to Play—There are some very good public course options and some nifty upscale ones as well. Locals relish the municipal Webb Golf Course opened in 1924 as a private club in one of BR’s affluent neighborhoods and which went public in 1941. It’s known for large oak trees lining the fairways. Locals also favor Beaver Creek, a muni set amid 152 acres. Another favorite is Santa Maria GC, designed by Robert Trent Jones Sr, that’s been improved by more drainage the last several years. LSU has a public course near the stadium that’s a pleasant and affordable diversion. It also boasts a private course, now serving as the home course of its golf team, but you need to know a member to get on.

The highest ranked public course by Golf Digest is the Arnold Palmer-designed The Bluffs On Thompson Creek in St. Francisville, a thirty-minute drive north of BR in the scenic and unspoiled Felicianas area. I liked this factoid about the golf course property: Holes 11 through 13 sit where John J. Audubon once studied and illustrated the local birds. In fact, thirty-two of the artist’s renowned Birds of America paintings were made while living in this area. Talk about Audubon-certified! CC of Louisiana: a Nicklaus design

The best course in the state as ranked by Golf Digest is the CC of Louisiana, a Jack Nicklaus Signature design, and it’s located in Baton Rouge. It’ll host the Louisiana Women’s Amateur in June. Opened in 1986 and in bayou country, it winds its way though undulating terrain marked by live oak and crape myrtle trees. The men’s state amateur will be played at Baton Rouge CC, recently redesigned by Rees Jones and native son David Thoms. The tournament also will mark the centennial of the Louisiana Golf Association. Both courses are private so a member connection is necessary.

For our first visit to the state and Baton Rouge, we were duly impressed.

With the mighty Mississippi in our rear view mirror, we pondered this thought: the Louisiana Purchase in 1803 was one heck of a deal.