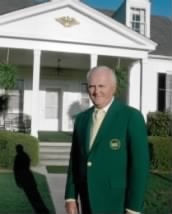 Yes, I’m calling this column “Hoard Harden” and that’s not a misspelling but rather a lame pun on the late Augusta National and Masters chairman’s name. Fellow baby bombers fondly remember Hord Hardin as the well-intentioned yet loquaciously challenged chairman who once asked the new Masters champion Seve Ballesteros in Butler Cabin in front of a national viewing audience, “Seve, how tall are you?”

Also, Harden was the one who, acting as a Masters rules official on the 10th green during a sudden death playoff in 1979, used the flagstick and an envelope to help determine which player was away. Honest. Look it up!

The St. Louis native Hardin was a fine amateur player in his day, competing in seven USGA championships including the 1952 US Open. He served as the president of the USGA as well. Final tidbit: Hardin summered in Harbor Springs, MI and in fact died there on Aug. 5, 1996.

But I digress. “Hoard Harden” is my description of all those golfers who steadfastly hold onto and keep their old golf clubs and equipment in their basements, storage bins or garage. They may be even hoarding them at a rented storage unit. Think “Storage Wars—Golf.”

Many save golf stuff for sentimental reasons; perhaps a particular club or putter has a special personal meaning or family memory. Others are kept for no reason at all, resisting the urge to declutter, sort and discard a la Marie Kondo, organizing guru.

Let me give you some of my own “Hoard” examples—compiled during a recent pandemic-driven inventory of my basement’s wares— before turning it over to some of my golf cronies. 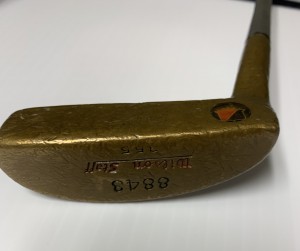 In the “sentimental” category: there’s my MacGregor Tourney persimmon driver with an aluminum insert used in my junior and high school golf days in the ‘60s; the PING PAL putter I used in the ‘70s and ‘80s;  and putters from my golf-loving and departed parents: Dad’s tiny-headed Wilson Staff 8843 and Mom’s pink-gripped Daisy by Axaline. I also keep a set of Tommy Armour persimmon woods beautifully refinished by the late Lin Buck of Grand Rapids before he became a prominent golf equipment rep. 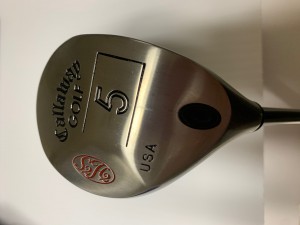 A gift from Eli Callaway

In the “trip down memory lane” category: there’s a PING 1-iron which was wielded for my first ace in ‘87; a Callaway Bobby Jones commemorative series putter featuring Callaway’s patented Hickory Shaft which was presented to me as a team member of the 1985 World Writers Cup Matches in 1985 at St. Andrews, Scotland; and a gorgeous small-headed Callaway 5-metal wood personally given to me by Eli Callaway after meeting him at the West Coast PGA Show in Long Beach, CA. Never been hit.

In the “beats me why I’m keeping ‘em” category: there’s a set of Mizuno MS-7 blades used in the ‘90s; a Nike 5-wood; a Titleist 975 D driver; and not one but two Callaway Deep Face Bobby Jones 9.5 degree drivers used in the 90s. (And yes cynics, I did pay for these now idle clubs.)

(Full disclosure: Actually, I have much more stuff not listed here but mum’s the word for my clutter-free and long-suffering spouse.)

Now to my cronies (I’m listing first names only to protect them from garage sale mavens and collectors) whom I asked what they’re still keeping: 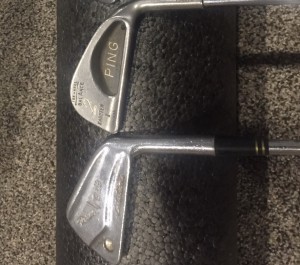 From Scot of East Grand Rapids: “A set of PowerBilt Citation irons. Worked all summer at Cheboygan GCC to buy them. First new set.  Made $350 and spent every dime on them plus three persimmon woods.” Scot also keeps a PING 2 iron.  “One of the first models.  I learned how to hit it and started to love hitting ‘deuces.’  Got it when I was a Junior in high school.”

Gregg of Naples, FL: “I’m still holding onto (and frequently playing) a circa 2000 Cobra utility baffler. I can’t find a replacement that I hit better.  It’s crazy with all the advances in technology that a 20-year-old club still out performs current technology.  But, in this case, it does.”

George of Midland: “I have spent more time and money buying 3 woods.  In my bag is a Sonartec, vintage year 2000!  Long story.” 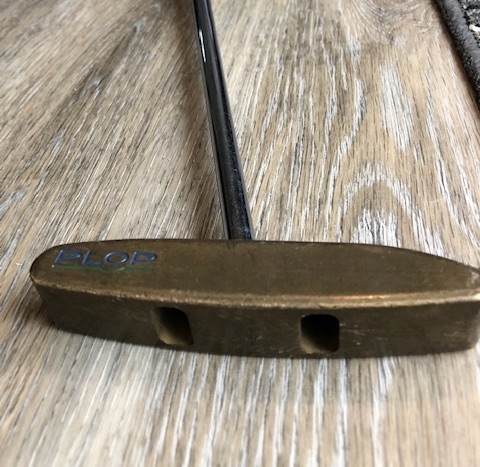 From Tom of Grand Rapids: Nicklaus Heritage 7-iron, a Plop putter and a MacGregor Nicklaus 4-wood (Swing weighted). All in rustic (aka sad) condition. 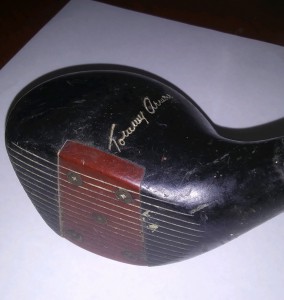 John of Kentwood: For posterity’s sake, he’s retained a MacGregor Tourney persimmon Tommy Armour Jumbo driver, purchased at an estate sale for a few dollars by his late mother, always a sharp-eye shopper.

Tim of Bonita Springs, FL: Has hundreds of wooden shafted clubs he sometimes refers to as “kindling.” With a wide assortment of clubs and putters, he keeps a set of PING irons and a treasured Tommy Armour fiberglass-shaft putter given to him as Christmas present by his younger brother, Terry. Tim used the same model of putter as a junior golfer but somehow lost or sold it.

Brent of EGR:  “I tend to trade in or give away my prior drivers, fairway woods, hybrids & putters, keeping only the most recent ones that got kicked out of my bag to make room for my new one. But I wish I still had the 1940s 6-iron purchased from the Salvation Army, the first club I ever had. I used it to play a course I devised around the neighborhood to play ‘on days not starting with M’ (Mondays when caddies like me could use Blythefield CC.)”

Obviously, Brent is not a member of the Hoard Harden club but given his sentiments over the forsaken 6-iron, and contrary to Marie Kondo, he wished he was!