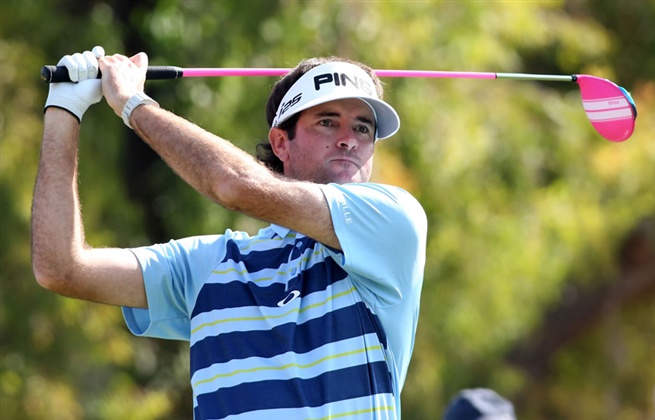 Next April, it’s possible Masters defending champion Bubba Watson could be asked to impart a few words of wisdom and advice at the Drive, Chip & Putt banquet. It will take place on Saturday evening at Augusta National for players and their parents gathered together on the eve of the 2015 Finals. To his awestruck admirers, Watson might say, “Trust and own your swing, don’t get too technical, work hard and rejoice at being at the Masters.”

OK, let me get back to that envisioned scenario in a moment.

For someone whose towering drives never fly under the radar, Bubba Watson’s game and chances to win his second green jacket did just that last week. In fact, out of the 54 credentialed golf media surveyed on Wednesday by the Augusta Chronicle about their choice to the win the Masters, only one writer (Golf World’s Geoff Shackelford) picked Watson. That’s hard to fathom given the fact that Watson won the Masters only two years ago and that this year leading up to it, he had a win, a pair of T-2s, a T-8, and a T-9—making him the 12th ranked player in the world.

So how did Watson fly under the radar and not get more attention prior to last Thursday? Several factors were at play. One, before his win this year in L.A. (Northern Trust Open) he hadn’t won since his stunning 2012 Masters playoff victory over Louis Oosthuizen. Second, his last tournament start before Augusta was at the Arnold Palmer Invitational at Bay Hill where he shot an opening 83 and then withdrew, citing allergies. WDs are not a popular player recourse with sponsors, fans and the media—as Rory Mcllroy rudely discovered last year after he withdrew after eight holes during the second round of the Honda Classic, citing a toothache. Later, McIlroy apologized for his actions as well as for his less than candid rationale. Likewise, Watson issued this tweet after his Bay Hill sudden departure: “Just wanted to tell my fans I’m sorry I had to withdraw from @APinv this week. My allergies have taken over!” Later he added: “It’s hard to focus when you’re (sic) heads all discombobulated from medicine and pollen #spellcheck.” Fair enough apology but Bubba still lost some PR points.

Watson’s image also took a hit last summer during the final round of the Travelers PGA Tour event in Hartford after his widely televised critical remarks about his longtime caddie, Ted Scott, at the par-three 16th hole. In contention, Watson’s iron shot found the water. Immediately, Watson ripped into Scott about the club selection. CBS-TV caught the incident live and it later went viral with Watson saying to Scott, “So you’re telling me that’s the right club?…There’s no reason for me to show up.” The next day, Scott told  PGATour.com: “I convinced him to hit the wrong club. I 100 percent take responsibility for it. It’s totally my fault. I got in the way of the painter on that one.”

Scott also shared some revealing insights about his boss, relating how Watson changed his mindset this year after a disappointing 2013. “But this year his attitude’s been great,” said Scott. “It’s been a lot of fun to work for him this year.” The caddie also cited the positive influence of Judah Smith on Watson. A pastor out of Seattle, Smith was described by Scott as Bubba’s “best friend on the PGA TOUR, his best friend in the world, pretty much.” Scott said Smith sat down with Watson before the season and they discussed a particular Bible passage. “It’s Philippians 4:11, I believe,” said Scott. “And it talks about rejoicing in your circumstances.” Smith reminded Watson about how as a kid he dreamed about playing in the Masters. According to Scott, the pastor went on to say, “You’ve won the Masters, you’ve won PGA TOUR events…So why don’t you just go ahead and rejoice?”

And rejoice Watson did after his final round, three-under par 69. In addition to improved and more patient course management, there were several key factors to Watson’s victory last week. Stat mavens will point out his tournament-leading long driving average of 306 yards. Big hitters regularly have an edge at Augusta especially on the par-fives where Watson carded six birdies and one eagle. Watson was also T-5 in the all-important Greens in Regulation stat for the week. The greens are diabolical enough without having to get up and down to save par. But Masters champions are best defined by clutch putting on the final day and Watson was magnificent, registering 11 one-putt greens. On that note, don’t forget those par-saving putts that Watson holed on Saturday at 17 and 18 when his round and scorecard were teetering. Those “makes” allowed him to be in the final pairing for Sunday. For the week, Watson also never had a higher score than a bogey, thus avoiding ruinous and confidence-sapping doubles and the dreaded “other.”

And finally there’s the simple matter of getting a timely and pivotal break on Sunday. Watson’s drive on 13 caromed off of the trees and landed in the fairway, only a wedge distance (for him) from the green. “His drive on 13, I’ll never forget,” said playing partner Jordan Spieth. “I thought it was out of bounds, 70 yards left, and it was perfect. He knew that, too.”  Watson ended up making birdie there while Spieth parred, resulting in a three shot lead he never relinquished.

In his press conference on Sunday night, a green jacket adorned Bubba Watson said, “I play golf because I love it. I love the game, I want to grow the game. The game has brought me everything I’ve ever owned in my life. My parents taught me values through the game of golf.”