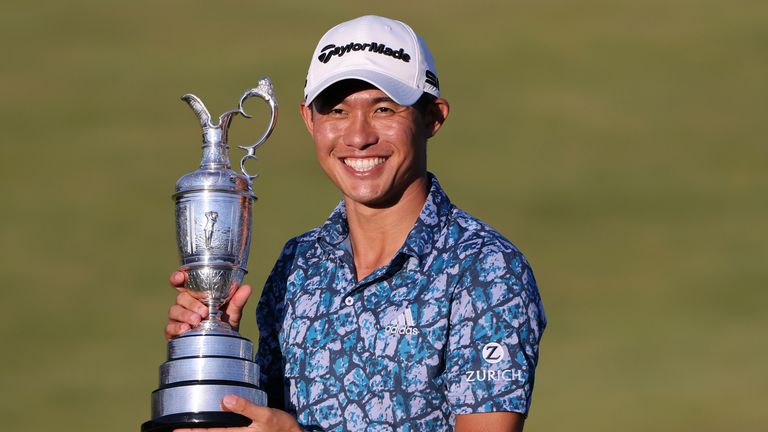 In balmy weather, Morikawa became the Champion Golfer of the Year

For thirty years I’ve been a morning radio guest on Grand Rapids’ WOOD-AM talking golf. The on-air segments take place around the Majors, usually the morning before or the morning of the first round. Last week, I chatted about the Open Championship at Royal St. George’s in England.

When asked what makes the Open Championship such a special major, I replied:  1. It’s history. Heck, the tournament started before the American Civil War in 1860! 2.  It’s held on links courses where the ball is played more on the ground than on PGA TOUR courses. 3. It has rumpled fairways where crazy bounces may mean even good shots may find penal bunkers. And 4. On top of unpredictable weather, the predominant color will be brown not green as seen at the Masters and regular lush Tour venues.

Okay, upon reflection, let me revise #4. This past week the R & A hosted an Open but from all appearances a verdant and benign Tour stop in the Midwest of the States broke out. And hardly any wind and rain either. What’s the Scottish saying?

I would add: Nae Open!

The course was green from all the recent rains. However, it did mean the rough was thicker than the normal wispy fare. The weather the whole week was the best I ever remember for the Open. I’ve never seen so many short sleeve shirts over there.

And the scoring reflected the easier conditions. Over 40 players shot under par for the week, led by Collin Morikawa at 15 under and runner-up Jordan Spieth at 13 under. The last time the Open was played in Sandwich in 2011 the winning score was five under par.  In 2003 when Ben Curtis was the surprise winner, it was only 1 under. Royal St George’s is widely considered one of the sternest tests on the Open rota.

Not to take away from Morikawa’s sterling performance but this wasn’t your normal Open Championship. It made no difference if a player teed off in the morning or afternoon wave when different wind and temperature changes usually prevail.

Statistics shed some insight on Morikawa’s victory. At most Opens, accurate driving is a necessity due to the rough, bunkers and weather conditions. Morikawa was just average, hitting 60% of them (the field was 58%). Normally, that could mean some big numbers. He won the Championship due to his strong iron game and putting. His Greens in Regulation (GIR) stat was near the top at 75% (the leaders hit 80%).

His putting was exceptional, averaging a near best of 1.54 putts per GIR.

And most importantly, Morikawa played a near flawless round, making no bogies in a 4-under par 66.  With the intense pressure of playing in the final grouping, Morikawa proved a worthy Champion Golfer of the Year.

Other thoughts and observations:

NBC Golf did a fine job and presented the Championship well with smart commentary and stunning visuals. I loved the views of the white cliffs of Dover. And on Sunday during the final round, I liked how a pair of Spitfires were shown flying overhead. Credit to David Feherty for his historical reference to them and the Battle of Britain.

In terms of production values, I really liked how the lie of the player’s ball was given a close-up treatment.  Nice and telling touch.

I can honestly say none of the NBC commentators are a nuisance to my ears. Although I winced when Jim “Bones” Mackay referred to Tiger Woods as “Tiggy” (sure, we insiders all call him that!) I did like it when he described another player’s driving as a “stripe show.”

Ann Arborite and ace announcer Mike Tirico was missed as he was in heavy preparation for the Olympics where he’s the lead talent for NBC in Tokyo. But Dan Hicks and Paul Azinger and the rest of the crew all did their homework with sharp observations and insight.

The most irritating part of this year’s Open coverage was during a certain commercial. I hate that loud-mouthed voice of the  PXG spot including the trademark slogan: “Nobody makes golf clubs the way we do. Period.”

And one more thing: enough of Bryson DeChambeau-Brooks Koepka “As the World Turns” soap opera. In particular, Bryson needs to just play golf and control his emotions and public statements.

One Response to “Remote Observations on the Open Championship”