This year I checked off a golf bucket list item. I finally played the North and South courses at Firestone CC in Akron, OH. Due to some special family memories, I’ve wanted to play these courses for a very long time. You see, my parents took my brother and me to our first major professional golf tournament, the 1960 PGA Championship at Firestone.

All the major players of the day were there—Arnold Palmer, Sam Snead, Ben Hogan, Ken Venturi, Doug Sanders, Dow Finsterwald et al. We couldn’t get enough of the action, watching these larger than life figures play the game. The course itself was magical, with lush green and trimmed fairways, yawning bunkers and huge rolling greens. And at that time, before the Dutch Elm disease decimated the property, it was also a heavily tree-lined layout. Now 60 years hence, the trees are again prominent over the landscape.

No longer strictly private, Firestone CC is open to corporate and individual play for those willing to pay for the privilege. Considering its history, impeccable conditions and amenities, it’s more than worth the price.

Adding to the experience, we played with a long time member, Gale, who I met playing golf over the winter in Naples. Gale’s a good player and thoroughly knows both courses. He also wisely suggested the set of tees that best suited our games. Like most championship courses, Firestone, North or South, is best played forward and within one’s normal length of yardage.

In 1929, Firestone’s South course was designed by Bert Way, an English-born golf professional who had moved to Detroit where he started laying out courses in Michigan and Ohio. As a footnote, Way also taught golf to John D. Rockefeller who founded the Standard Oil Co. and became the richest man in the country.  Henry Firestone hired Way and he delivered a par-71, 6620-yard test. The course would host six Rubber City Invitationals, attracting the game’s best players to Akron.

But the South course at Firestone earned the right to host the prestigious 1960 PGA Championship after a major renovation by Robert Trent Jones, Sr. He added 50 bunkers, two ponds and stretched it to 7,165 yards at par-70. Akin to Oakland Hills CC in Detroit, it was a beast. In fact, the winning score for that ’60 PGA won by Jay Hebert was 281, one-over par.

Today, Firestone is still a championship test and if your game is awry the troubles and doubles will add up. But if you drive the ball well and keep it in the fairway, one can score here if—and it’s a big if—your touch around the greens is deft.

What made playing the South so enjoyable was retracing the historic shots seen over the years. Tiger’s eight (!) commanding wins, including one in near darkness, were brought up several times as was Nicklaus’s amazing par one year at the iconic par-five 16th hole. It was my favorite hole on the course because three good shots at the right angles are needed to find the putting surface.

As much as I enjoyed the South course, the North course proved to be even more of a treat. Gale said it was favored by his regular weekly group for its overall playability and pleasant views. I readily agree.

The North course, designed by Jones, Sr. in 1969, is noted for its ponds and lakes and rolling terrain property across the road from the main clubhouse. It has hosted an American Golf Classic PGA Tour stop as well as a World Series of Golf tournament.

Like the South, the layout was in pristine condition. The greens rolled fast and true and with enough movement in them to require one’s full attention. First timers really need a good caddie or a savvy member like Gale to help in reading them. Yet they’re tamer than those found on the South.

Jones was masterful in designing several holes around water, a notable feature of this excellent course. The par-3 11th hole particularly stood out. It demanded a stout iron from the white tees at 162 yards, traversing over a lake to a well-bunkered green.  Likewise, the 17th is another one-shotter, downhill over water to a big green. A very scenic hole to boot. 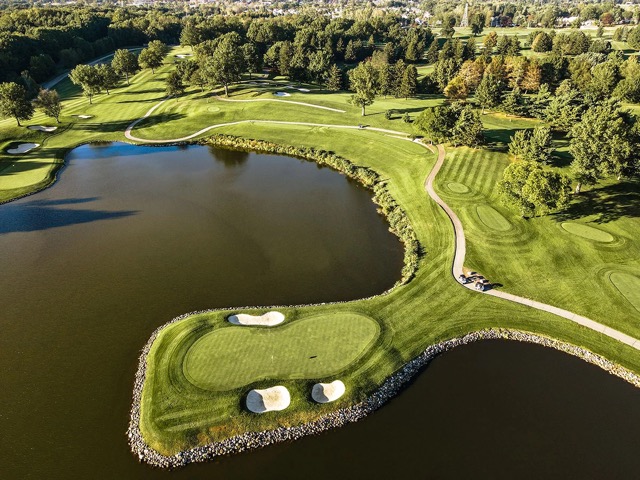 Capping it off is the par-five 18th hole, a beguiling dogleg around the lake. Like the 16th on the South, this hole embodies the “heroic design” philosophy made famous by Jones throughout his storied career. You need to know the best route off the tee and on subsequent shots to make par or better.

Playing the North and South courses was a delight, conjuring up fond memories of when I first stepped on the grounds in 1960. Despite their challenges, it made me feel like a kid again.

Note: Now owned by ClubCorp, Firestone offers a stay-and-play package which includes on-site lodging and dining as golf options at all three of its courses, including the Tom Fazio-designed West Course. Prices vary with time of year but the post-aerification period after mid-October is a smart choice.