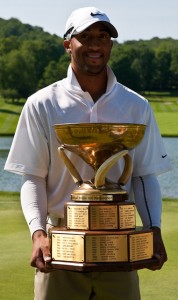 The 100th Michigan Amateur contested at The Heather at Boyne Highlands delivered history-making golf as Flint’s Willie Mack III became the first African-American to win the state’s oldest golf championship. Mack defeated defending champion and local favorite Joey Garber, playing on his home course, 4 & 3 in the 18-hole finals match. Although I wasn’t there for the finals, I did manage to follow Mack earlier in the week including a 21-hole victory that ended in the dark.

A recent graduate of Bethune-Cookman University in Fla., Mack possesses an impressive game. Earlier this spring, he shocked west siders when he won the West Michigan Amateur at Candlestone GC by birdieing two of the last three holes to erase a three-shot deficit to Tom Werkmeister, Grand Rapids’ premier player, claiming the crown in his first attempt. (To boost the field, tournament officials this year allowed entries from across the state.)

Only 5’8” tall and weighing 150 pounds, Mack generates plenty of clubhead speed and length with a powerful whip-like swing mindful of Rickie Fowler. And like Fowler, he’s an exceptional putter. Watching him compete in several matches at Boyne, I was most impressed with his accelerating and aggressive stroke, almost always getting his misses past the hole in the preferred Dave Pelz range of 18 inches. His putting routine is consistent and he’s never careless with his short putts. In the 21-hole match on Thursday, Mack made consecutive three-foot comebackers to halve the holes before ending the match at 10 p.m. with a 30-foot birdie that rattled the back of the cup.

I also liked the pace of Mack’s play; he’s ready to hit and gets at it when he’s away. This is refreshing in an era when the stakes of college golf have added excessive pre-shot routines and too much deliberation. But Mack’s best quality, and one that will arm him well for the rigors of professional and mini-tour play, is his laser-like focus and intensity level. He’s totally into the moment and the shot at hand. It will be this aspect of his game, and not mechanics, that bodes well for Willie Mack III.

Now for some other thoughts and impressions of the Michigan Amateur conducted by the Golf Association of Michigan: