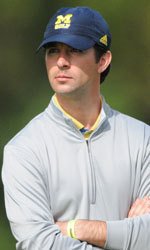 As described by Chris Whitten, University of Michigan’s head golf coach, “it’s not uncommon for college golfers to transfer to another school but it’s uncommon for it to happen at Michigan.” Still Whitten remained upbeat and optimistic about his team’s future in spite of losing rising star Joey Garber to the University of Georgia. “We’ll have a very good team and our goals remain the same: to win the Big Ten Championship and perform well in the post-season.” Named the head coach in June after serving as an assistant to Andrew Sapp who left to coach at his alma mater North Carolina, Whitten had good things to say about Garber, the 2010 Michigan Amateur champion and the runner-up this year: “Joey was open and honest with us about his evaluation process and I am very supportive of him. Obviously, I was hoping he would return to Michigan but I wish him the best.”

Reached by phone this week, Garber said it was a difficult decision to leave Michigan. “This was a tough decision about my future,” said Garber, a Petoskey native. “Going to Georgia allows me to play year round and not have such a long break from the game as you do in Michigan.” Garber said he noticed his spring scoring average was two or three shots higher than in the fall. The composition of Georgia’s team was also a factor in his decision. Runner-up to Augusta State in the NCAA Championship, Georgia graduated three All-America golfers this year and it’ll be the first time in many years where no All-America golfer is returning in the fall. “I’ve known some of the guys on the team from my junior golf days and it’s just a good fit for me.” Garber also admitted the appeal of playing Augusta National Golf Club as a team member was also a factor. “Georgia plays some wonderful courses throughout the season.”

But the overriding factor for Garber’s surprising transfer was his desire to take his game to the highest stage: the PGA Tour. “When you look at the PGA Tour there are only two or three players like Steve Stricker and Jerry Kelly who live in the Midwest,” said Garber. “Most of the Tour players live in the Sunbelt and play year round. Also, Georgia and Coach Chris Haack have a successful track record for producing Tour players.” 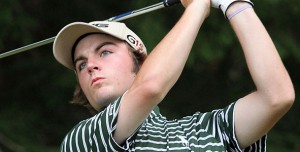 Garber is taking his game to Georgia

One irony in the timing of Garber’s departure is that Michigan will open in October a state-of-the-art indoor golf center, a 10,000 square foot facility with open hitting bays and an expansive indoor chipping and putting green. “The facility has already made a difference in our recruiting,” says Whitten. “In my opinion, there are a number of factors that go into a player’s improvement in the course of the year. It’s not just all out on the course; there are strength and conditioning factors as well as the mental side of the game.” Whitten added: “There’s often a stigma that at northern colleges a player’s game will worsen from fall to spring. That’s not always the case.”

Whitten says the Wolverines play 10 events per year, evenly divided between the fall and spring. Team members are committed to 20 hours per week of golf or practice with one day off as required by the NCAA. “It’s like a part-time job,” says Whitten. The coach is excited about the Wolverines’ prospects this coming season with the return of such stalwarts as senior Matt Thompson and junior Jack Schultz. He’s also keen on two highly touted incoming freshmen, Florida’s Andrew Wong and Korea’s Noori Hyun.

What’s the upshot to this story? Well, Michigan obviously took a hit with Garber’s departure but it still remains a strong program at an attractive institution with even better indoor facilities now. For Garber, he’s relentlessly following his dream to make it on the PGA Tour. To him, that road is routed through Athens, Georgia. Hard to quarrel with that.

Yet I’m reminded of the example set by PGA Champion Keegan Bradley that the path to the Tour and success is often governed less by geography and more by a well-grounded mindset and a hungry heart. Like Garber, Bradley grew up in the north (Vermont) and skied in the long winters. He played his college golf at St. John’s University in New York, not your hotbed college golf destination, while not foregoing his New England roots. That path to fame and fortune turned out quite well.

photos courtesy of University of Michigan and AJGA

3 Responses to “Despite losing Garber to Georgia, U-M coach remains upbeat about team”