Sunice’s Typhoon-model waterproof pullover is a winner and let me add I’m a tough soft goods critic. When it comes to rain gear, I’m very picky because in competition it’s more than just clothing it’s part of your equipment. At least, that’s what one veteran PGA pro told me once and it sold me on the spot. I was attracted to this short sleeve Typhoon pullover because it promised these key essential adjectives: waterproof, breathable, featherlight and elastic. My other rain jacket and pants were also of quality construction and held up well in torrential downpours but at other times the gear was too heavy, restrictive and hot. In contrast, the Sunice Typhoon performed perfectly in warmer temps and lighter rainfall and lent greater freedom of movement during my tournament play. The patented finish of the shell is called Wx Tech™ which is a unique formula allowing air to flow freely through the clothing. It delivers maximum breathability for the garment while also repelling water. For more information, visit www.sunice.com 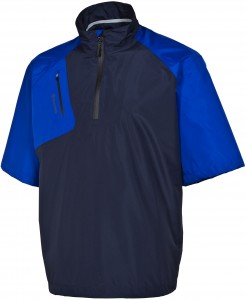 Sunice, a Canadian company, has an interesting and fast-pace history. Founded in 1976 in Calgary, it quickly established a respected brand presence in skiwear. It first gained widespread attention six years later when it outfitted a Canadian team that resulted in the country’s first ever attempt to climb Mt. Everest. It solidified its footing in 1988 when Sunice was selected as the Official Supplier to the Calgary Winter Olympics. On the impetus of its Olympic success, Sunice branched out into golf in 1992. Nineteen years later, Sunice is now regarded as the top Canadian golf outerwear company boasting a number of domestic and international tour players as its users.

As a case in point, let me share this final observation about Sunice from this past week. Nestled in my easy chair, I was happily watching the PGA Grand Slam of Golf on TNT held in Bermuda at the stunningly beautiful Port Royal Golf Course, a public-access course renovated–by Robert Trent Jones disciple Roger Rulewich–to the tune of $12 million by the government to spark a Pure Bermuda-type tourism campaign.

During the first round on Tuesday, the sunny and expansive sky over the ocean quickly turned dark and ominous and soon afterwards a rain squall pounced down on the celebrated foursome of Keegan Bradley, Darren Clarke, Rory McIlroy, and Charl Schwartzel. Methodically, each one of them donned their rain gear. But standing out in the group and sporting a stylish short sleeve waterproof pullover, in contrasting colors of gray and charcoal and with a distinctive yet understated red trim around the zippers, was Bradley. Marveling at his powerful and free-flowing swing, I took a closer look at his logoed garb during one of Bradley’s tee shots. Yep, the former junior competitive skier from Woodstock, Vermont (hey, did little Keegan wear Sunice skiwear?) and now PGA champion was wearing the exact same Sunice Typhoon pullover as mine. And like me, he’s not even under a Sunice contract!

Once again, sold me on the spot.