Winner of the 2011 U.S. Mid-Amateur Championship, Randy Lewis of Alma, Mich, will be competing in this year’s Masters Tournament. Currently, he’s the only Michigan native set to play at the game’s most coveted and storied venue. The Michigan Golf Hall of Fame member recently spoke with me by phone from Florida, where he’s been practicing and preparing for his “dream come true” experience in Augusta, Georgia.

How many times have you played Augusta National since you received the invitation?

I’ve played five rounds so far. I was planning to drive down to Florida this winter to get my game in shape, so I looked at the weather forecasts and called the club about playing there on my way down. I played my first round in late January. I wanted to shake off some of those nerves about being there well before Masters week and I’m glad I did.

It was an incredible experience. I dreamed about playing there as a kid. The two co-head golf professionals were wonderful and assisted me with the scheduling details.  In fact, all the people at the club have been unbelievably nice and helpful. I couldn’t have been treated any better. The first two times I played were by myself and with my caddie. 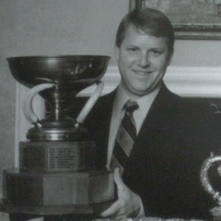 Who was your caddie at Augusta and will you be using him during the tournament?

His name is Julius and he’s been phenomenal in helping me learn the course and the greens. But for the Masters I’m using the same caddie who was with me in Houston (TX) when I won the Mid-Amateur because he played such an important role there.

Tell us about him and how did the two of you meet?

He’s Bob McFadden, a professional caddie who lives in Houston and works at River Oaks CC there. Not on the Tour caddie circuit anymore, Bob spent 14 years working on the Senior, now Champions, PGA Tour for Tom Jenkins. Together they won seven times out there and earned over $13 million. It was kind of a fluke how we met. In Houston for my first practice round for the Mid-Am, my scheduled caddie—arranged by the pro shop—didn’t show. I asked the assistant pro to find me another caddie for my first qualifying round. So an hour before that round and, as promised, McFadden showed up for my bag.

What made McFadden so valuable?

Well, he’s such an experienced and veteran caddie. He made sure I slowed down and caught my breath. Of course, he’s 64 and I’m 54 so that was a good idea for both of us (laughing.) But he knew how important it was to stay calm and not get too hurried especially between matches. And besides it was 95 degrees and humid down there. Anyway, he made a huge difference and it’ll be great for us to team up again at Augusta. He’s never caddied there but Julius has agreed to help us with the greens.

Where are you playing and practicing in Florida?

I’ve been at The Floridian National Golf Club, a fabulous golf course and facility in Palm City. Formerly developed and owned by Wayne Huizenga, it was bought two years ago by Jim Crane, owner of the Houston Astros and a major businessman. He had Tom Fazio do a major renovation on the course. There’s also a new Butch Harmon Learning Center. Everything is first-class and I’ve been fortunate to be here. I also want to thank my partners at the Raymond James office in Michigan for allowing me to work out of Florida while getting my game ready. They’ve been so supportive; they know how much this opportunity means to me.

What are your goals for the Masters?

They’re simple: I’m trying to play to the best of my ability. That’s all I really can ask. I’ve been working on some things in my swing down here and hope everything falls into place for the Masters. Obviously, I want to hit the ball well and try to manage the pace of the greens.

Will you be adopting Zach Johnson’s strategy of not going in two for any of the par-fives?

Definitely, because I don’t hit it long enough to do otherwise (laughing.) Now on the 13th hole (510 yards, par five), I’ve hit some good drives and been within distance to go for the green. But then I found myself trying to hit a hybrid off a severely sloping fairway so it didn’t make sense. You can’t believe some of the hanging lies—sidehill, downhill, uphill—you’ll have in the fairway. The course has so much slope and roll to it. So yes, I’ll be laying up.

When do you plan to head to Augusta?

I’m headed there again next week (week of March 26) to play some more rounds but after that I’ll spend some time practicing and resting up at Reynolds Plantation. My plans are to check in officially for the Masters on the Saturday before tournament week or March 31.

Are you renting a house or bunking down in the famed Crow’s Nest inside the clubhouse?

No, we’re renting a house since my family will be with me. I did visit the Crow’s Nest and it was a treat to see. But with the way I sleep it wouldn’t be a good idea for me. I’m going to need a good night’s rest all that week.

(Photo courtesy of the Michigan Golf Hall of Fame)