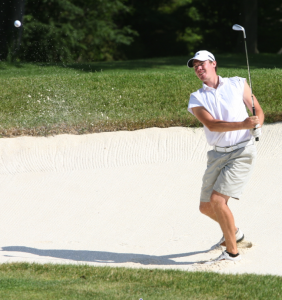 This season there’s been chatter about players “owning their swing.” In Lorne Rubenstein’s excellent new book about Canada’s Moe Norman, Moe & Me, the author quotes Tiger Woods as saying, “Only two players have ever truly owned their swings: Moe Norman and Ben Hogan.” The more I thought about this observation, which is largely true, I found other examples. Surely, Jim Furyk owns his swing despite its confounding loop and so does Masters champion Bubba Watson who prides himself on never having taken formal golf instruction. In an era of over-glorified swing doctors, psychologists, trainers, and nutritionists, it’s refreshing to see such players trusting themselves and their innate talents.

On the state golf scene, a similar example is Drew Preston, the recent Michigan Amateur champion. I’ve followed Preston since he competed at Forest Hills Central High School and later at various Grand Rapids-area tournaments. Unlike most of his contemporaries, Preston’s swing is short and quite fast. It reminds me of a combination of Dana Quigley and Doug Sanders, Tour players known for abbreviated but powerful backswings. In local circles during the late ‘60s and early ‘70s, celebrated junior player and later Michigan State golfer John VanderMeiden, of Grand Haven, was known for his short but repeatable backswing.

Anyway, Preston’s story of golf achievement is especially noteworthy given the fact he’s been largely self-taught, a rarity these days for aspiring junior and prep golfers. “I’ve only had one lesson my entire life,” said Preston. “My parents don’t golf and so I’ve learned the game on my own.”

Preston didn’t pick up the game until his parents gave him a set of junior clubs at age ten. Before then, he was an avid hockey player. Not members at any private club, his parents had a cottage in north Muskegon where Preston played his summer golf. “I didn’t play my first junior tourney until I was 13 or 14 when I started breaking 80,” said Preston.

So how did he learn the game and its many intricacies? “Besides just watching other players and tournament golf on television, I read all the golf magazines and explored the philosophy of the great players and teachers,” said Preston. “I know my swing is a little unorthodox but I’ve always focused on the six to ten inches around the impact zone. That’s how I get the ball around the course.”

As his game developed and became successful in competition, Preston realized his swing delivered consistent results. “I stepped back and evaluated my swing and said, ‘OK, I have a short swing but I have less room for error.’ ”

Preston says too many college players get trapped into rigid swing mechanics. “I feel some of my friends struggle at times because they don’t focus on playing the game and get too caught up with swing mechanics. Basically a feel player, I rely on myself and try to figure it as I go around the course.”

Self-reliance was a Preston strength as he handled the big stage of the Michigan Amateur. In fact, Preston carried his clubs without use of a caddie for all nine rounds (including a practice round) at Oakland Hills North. “I thought about getting a caddie and three or four people even offered to caddie for me for free but I said, ‘thanks and no offense, but I’ll go it alone.’ My plan was to keep my head down, trust myself and keep my focus on each match.”

Early in the week, Preston sensed his game was in synch. “All players want that feel where they’re in the slot and can just hit it. And that’s what I felt all week. In my first match, I birdied four out of the first six holes and in the second match I birdied the first two.”

In the final match, Preston bested fellow Grand Rapids golfer and the 2009 Amateur Champion Tom Werkmeister, 2 up. “Tom is such a solid player and competitor; I knew it would be close.” A key shot occurred on the 18th hole when Preston’s drive found the hillside in the left rough. “I had 104 yards to the hole and 91 yards to just carry the bunker,” recalled Preston.” I decided to go with a 60 degree wedge, put it in the back of my stance and just hit it hard. Fortunately, it came out perfectly to within 15 feet.” From there and after Werkmeister made par from the bunker, Preston claimed the title by rolling in his birdie.

In terms of the rest of the summer, Preston will try to qualify for his third U.S. Amateur at Muskegon CC on July 30 while also competing as an exempt player in the GAM Championship at Point O’Woods in August. In the interim, he’s taking 12 credits both this summer and fall at Bowling Green in order to finish up his Business degree in December.

Even a successful self-taught golfer and now Michigan Amateur champion knows the future is brighter with an old-fashioned diploma.

Image courtesy of the Golf Association of Michigan