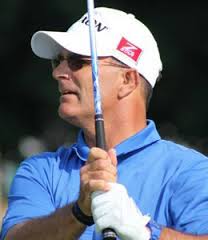 (Haven, Wis) There’s only Michigan player in the field this week. Brian Cairns, 51, was one of only 20 PGA club professionals earning his way into this storied event. A talented player and teacher from the Michigan PGA Section, Cairns birdied his first hole. “And that was after my drive found a pitch mark and was semi-buried in the fairway,” smiled Cairns. Unfortunately, some loose shots at a course that makes one pay dearly for mistakes derailed Cairns who ended up with an 83. But in his usual good spirits and class, Cairns handled his adversity well. “I really expected to be around par today in spite of how long this course is. I had some good chances early on but I didn’t make any putts.” Cairns said making doubles at #5 and #14 were tough to swallow. “My goal was no doubles and that didn’t happen,” said Cairns. When asked what makes Whistling Straits such a demanding test, he said: “The margin for error is small and when you make a bad swing or have an even slightly off-line shot you can pay a big price.” Cairns said he enjoyed watching fellow competitor Matt Jones. “He shot an easy 68 and it could have been lower.” An Aussie, Jones won the 2014 Shell Houston Open. Rounding out the threesome was Matt Every, the back-to-back Arnold Palmer Invitational winner, who carded a 74. Caddying for Cairns this week is Jordan Young, a fellow Michigan PGA pro and teacher at Fox Hills Golf & Banquet Center. 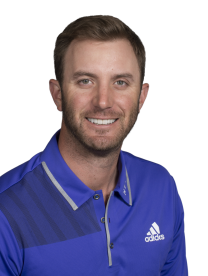 Dustin Johnson fired a six-under par 66 on Thursday and oddly enough it was partly attributable to executing a shot he’s not “ever really played” before this week. Twice he got up and down from the collar of the green to save par by using a 5-wood. “I was out here Monday, Tuesday and Wednesday trying to hit those shots and I started using that (5-wood) and it worked out well.” He also had an eagle at the 569-yard par-five 16th hole where after a big drive he hit a 4-iron from 240 yards and made a 25-foot putt for three. His playing companion Jason Day, who shot 68, says Johnson’s length is a major advantage. “He’s putting himself in position where 95, 99 percent of the players aren’t there. On the 489-yard par-four 4th hole, Day said Johnson only had a sand wedge left to the green. “That’s just freakish to be able to do that.”

It’s an understatement to say this is a huge venue. The walk from the parking lot to the entry gate was at least a half mile and along the way massive banners were displayed of past champions and current stars. As they say, it’s an impressive platform to stage a modern major with its array of tented villages and hospitality suites. And the folks at Kohler and the PGA have refined this staging of the championship, held now for the third time (2004, 2010, 2015) along Lake Michigan. In fact, there’s one exit from the freeway to the Championship that’s only used this week. I imagine this exit won’t be used again until the 2020 Ryder Cup Matches.

A golf writer from Vancouver reminded me this week that Whistling Straits landed the 2010 PGA after Sahalee Country Club in Redmond, Wash., bowed out of its commitment—with the PGA’s blessing—due to concerns about corporate sponsorships and competition from the ’10 Winter Olympics in Vancouver. Smelling an opportunity, plumbing fixture mogul Herb Kohler was more than happy to fill the spot for his high-powered resort destination. He parlayed that savvy move by adding another PGA this year and the Ryder Cup five years hence. A small oversight by the Kohler team: the media rest rooms do NOT feature Kohler products. Tellingly, there’s tape over the rival brand. 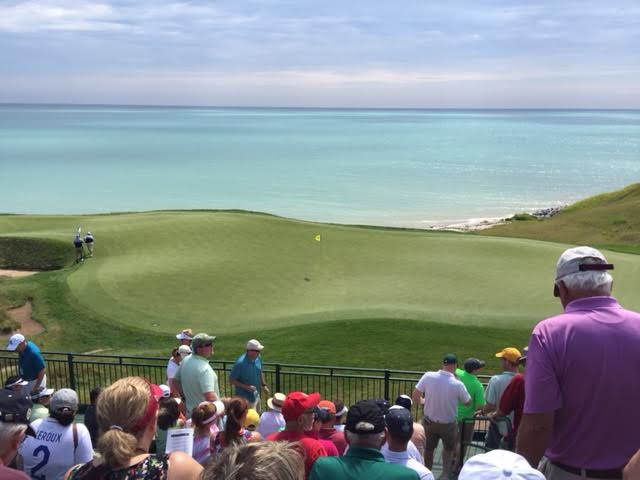 The par-three 12th hole has a majestic view

I walked the back nine at Whistling Straits and the views are stunning. One of the best spots is the grandstand at the nifty 12th hole, the 143 yard, par-three. It sits high above Lake Michigan which is majestically placid and colorful today when the sun finally poked its head out of the clouds. The pin is in a benign spot—middle front—today but come Sunday expect to find it in the back right location which is absolutely treacherous.

I don’t seek out Tiger Woods but as I walked along the 16th hole, his group drove up the fairway. Well, almost the fairway. Tiger’s new “stinger” shot nowadays is when his errant drive hits a fan. Today he hit the heel of a fan that happened to be standing next to me. After only a few minutes a nasty welt had already formed. Nonetheless, Tiger managed to birdie the hole. And yes, the large gallery following him was enthusiastically cheering him on. I will say Tiger was much more polite with the gallery and marshals when they were cleared away for his shot. In the old days, Stevie Williams would be Tiger’s brusque mouthpiece. 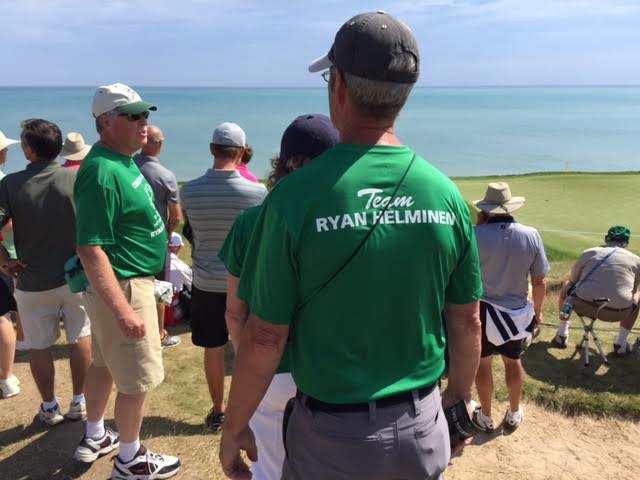 Team Helminem was out in force

A nice gallery of “cheeseheads” was following Wisconsin club pro Ryan Helminen. From Appleton, Helminen had the honor of teeing off first at 6:45 am on # 1. His supporters were sporting green tee shirts that read: Team Ryan Helminem.

In a sign of the digital age, complimentary wi-fi is available in the areas around the main entrance, public food court, practice range, putting green, clubhouse and around several tees and greens.

Photos courtesy of the PGA Tour and the Michigan PGA