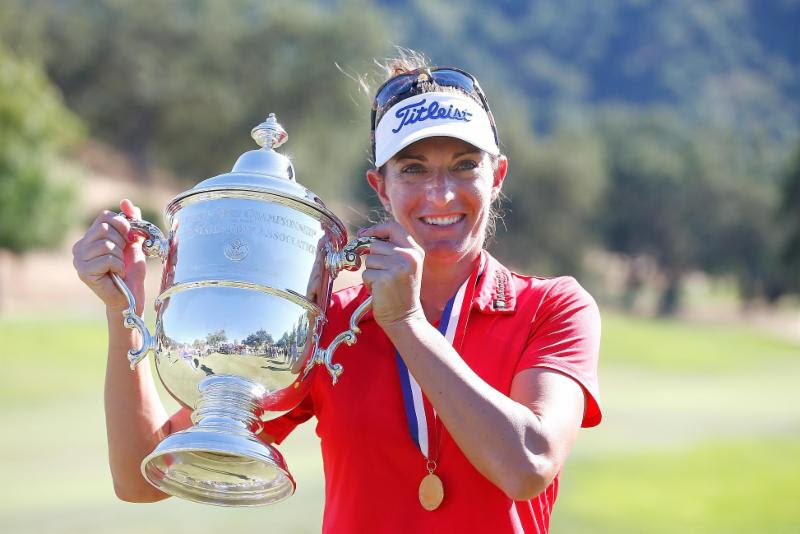 The USGA can’t seem to catch a break in some of its televised national championships. Case in point is last weekend’s U.S. Women’s Open won in a playoff by Brittany Lang over Anna Nordqvist. The championship was going along fine and in dramatic fashion thanks to the three-hole aggregate playoff between the duo. Unfortunately, we all know how it ended: not with a bang but with a whimper due to another rules infraction conjuring up the same ill spirits seen at Oakmont in last month’s U.S. Open. However, there were some critical diffferences between the two incidents.

Unlike the case with Dustin Johnson incurring a one-stroke penalty for having his ball move on the fifth green, there was no argument or controversy about the two-shot penalty itself on Nordqvist for grounding her club in the bunker. The penalty was harsh but correct given the indisputable video evidence. To outsiders, the penalty may seem draconian if not silly about a player inadvertenly disturbing an insignificant grain of sand. What’s the harm in that? But that’s the nature of the game and the integral role the rules play in its conduct. As the former USGA Executive Director Frank Hannigan once told a public golf gathering in Michigan, “You don’t have to play by the official rules of golf but we think it’s a better game when you do.” In a similar vein, Fox TV commentator Brad Faxon wisely cautioned restraint in criticizing the penalty itself as another sign of how golf is out of touch with the average golfer. Good point. Every sport has rules that may seem strange if not ridiculous to the casual observer.

I also felt the USGA did a better job of expediting the rules matter in this instance than at Oakmont. At Oakmont, the time lapse and hovering indecision about Johnson’s penalty were mismanaged. As USGA Executive Director Mike Davis later admitted, “We don’t like how we handled the timing of this issue, not how we handled the ruling part …This has clouded an otherwise great U.S. Open.”

At the U.S. Women’s Open, the USGA was blindsided by Fox’s HD cameras revealing in video replay a heightened close-up of Nordqvist’s iron touching a grain of sand. Nothing was evident in real-time or to the naked eye when she addressed and struck the shot. And contrary to some reports, there was no tell-tale indentation of the sand as Nordqvist took the club away. The grooves in the sand were made from Nordqvist’s incoming shot.

However, like Oakmont, this rules situation could have been handled better with the aid of portable technology. Another delay occurred because the USGA’s John Bodenhamer had to be called off the course and into the compound to review the video. As I wrote last month about Oakmont, why not provide the on-course officials with an I-pad with HD so they can see the same video as those in the compound and those watching on television?

In fact, that same video on the I-pad could have been shared with Nordqvist when she was informed about the rules infraction. Instead, the delay in making the call opened another can of worms in the “sequence” of when the players were informed. In this case, after Nordqvist hit her third shot on 18 and before Lang hit hers. And if you don’t like the I-pad idea, then have someone in the USGA compound make the definitive ruling without having officials being taken off the course. (Note: For the past decade, the top officials of the R & A for its Open Championship monitor play from its compound and make any necessary decisions from there.) In this instance, it was an easy call given the video evidence. And since it was an aggregate playoff situation involving only two players, it would have been adviseable for the USGA to have suspended play while the matter was being reviewed.

The bigger question is how the USGA moves forward in similar situations when the televised audience sees such video evidence and not the players or walking officials. Like the NFL, NBA and MLB, it must monitor the situation, i.e. the televised narrative, in better fashion despite the wide variance in the arena and playing surface. It should take a lesson from its R & A brethen on this important facet.

It’s a shame the U.S. Women’s Open ended the way it did. USGA President Diana Murply didn’t help matters by referring to the champion as “Bethany” instead of Brittany. As a follow up to her shaky if not embarrassing podium performance at Oakmont, Murphy seemed as snake bit as the USGA itself.

Here’s hoping for better days ahead for the USGA, particularly at the U.S. Amateur at Oakland Hills in August.