The recent passing of Frank Chirkinian, the storied and award-winning CBS-TV golf producer, brought back memories of an exclusive inside-the-truck story on the legendary television pioneer who helped shape a generation’s perceptions on tournament golf, the Masters, and the game itself. Here’s the story.

A rookie editor for the fledgling Michigan Golfer magazine, I interviewed CBS golf commentator Ken Venturi in June 1983 when he was in Grand Rapids as a headliner for a charity tournament. Following that interview, I asked him if there would be any chance of me spending a day with the CBS golf crew, witnessing first hand how producer Frank Chirkinian molded a telecast. Ever gracious, Venturi encouraged me to make the request, mentioning his name, by writing letters to Chirkinian and to his Associate Producer Chuck Will. 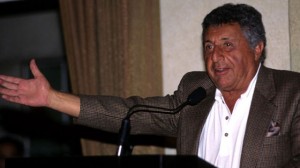 I wrote the letters and after receiving a positive reply from Will, I found myself in July at Butler National GC outside Chicago where CBS was doing the Western Open telecast. Stepping inside the CBS administrative trailer I introduced myself to Will and after some good-natured bantering it was apparent I was going to have my story about CBS Golf. Unfortunately, inclement weather spoiled my plans. Just when I was going to enter Chirkinian’s production truck, I was told the round was cancelled due to thunderstorms.

But a silver lining in the clouds later appeared: I was invited down to Akron, OH, by Will for the telecast of the World Series of Golf, the crew’s last tournament of the season. And so, with that as long-winded background, let me relate some of the highlights of that day—Aug. 15, 1983–when I was granted an “all-access” pass inside the CBS golf truck with Frank Chirkinian.

I was too green and dumbstruck to challenge that ridiculous claim. Later I wrote up my experiences in the Michigan Golfer in a lengthy article entitled, “Inside the Truck with the Wizard of CBS Golf.” I sent Will a copy and asked him to share it with his boss. Through the years, I was always welcomed when I stopped by to see Will and the crew at their annual stop at Warwick Hills for the Buick Open. I always sensed they sized me up as “golf guy” and a “fan” and as such posed no threat to their realm. And they were right. No one did televised golf better than CBS and if you loved golf you wanted to breathe in some of that rarified air.

That climb to the summit all began with Frank Chirkinian.

Read all of our great stories on by TheAPosition.com writers as we cover The Masters:    http://www.theaposition.com/partner/the-masters

One Response to “Remembering Frank Chirkinian: The Wizard of CBS Golf”