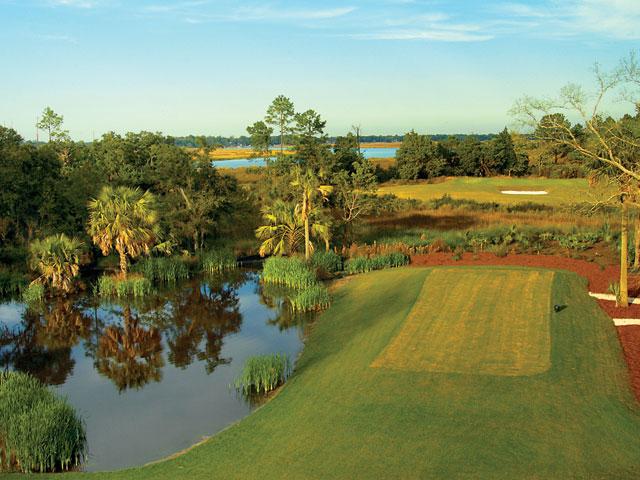 It may not win any beauty awards but Sanctuary Cove, one I-95 exit south of Brunswick, manages to be both elegant and stimulating without resorting to the kind of earthwork and artifice that so regularly apears on poor sites.

With so little to work with—just a development in a flat forest of pine, palmetto and scrub on the edge of the Little Satilla River coastal marshes—Mark and Davis Love III’s design turns tricks with neoclassical elements to make the nondescript property stimulating (their office, by the way, is just a few miles from here on St. Simons Island).

It’s a lesson in how to transform undistinguished land into strategic golf. Not by sculpting every square yard but by shaping selectively at certain focal points; by building steep, striking bunker faces; placing hazards boldly on lines of play; subtly concealing the fronts and other parts of the putting surfaces; and creating high contrast green complexes juxtaposed against the relentlessly level grade.

This is how courses used to be built out of necessity, when shaping large features was difficult and expensive, and which makes the Love group’s taste and restraint at Sanctuary Cove admirable. The course comes off as a throwback, something like apoor man’s Yeamans Hall–less natural movement perhaps, and less dramatically bunkered, but a lively game carried off to similar effect.

There’s no doubt a thoughtful but not overwrought Seth Raynor ethic here. Bunkers are flat-bottomed and rectangular, greens are angled sharply behind coffin and strip bunkers, and the elevated putting surfaces have quiet Raynor/MacDonald qualities.

You’d be forgiven if you mistook Sanctuary Cove’s 11th for something made by Seth Raynor.

I particularly love greens like the 1st with its flared wings, the mini-inverted Biarritz at 4 (with a protruding ridge rather than a swale), the connected double plateau at 6, the punchbowl aspect to the par-3 8th, and the deep running L-shaped green at 10.

The bunkers cut into fairways at the 7th, 12th and short par-4 15th are maddening because they’re perfectly placed. In fact, almost every hole has one unique, defining feature. But since there’s such a lovely Raynor flavor, I have to comment on a missed opportunity: the par-3 13th, which opens up to the marshes beyond, would have been a perfect spot for a strong version of an Eden hole. [Note: Fred Couples consulted on the Sanctuary Cove design.] (88)

The Golf Club at Sanctuary Cove

From the sky: Sanctuary Cove’s 15th, a drivable par-4.