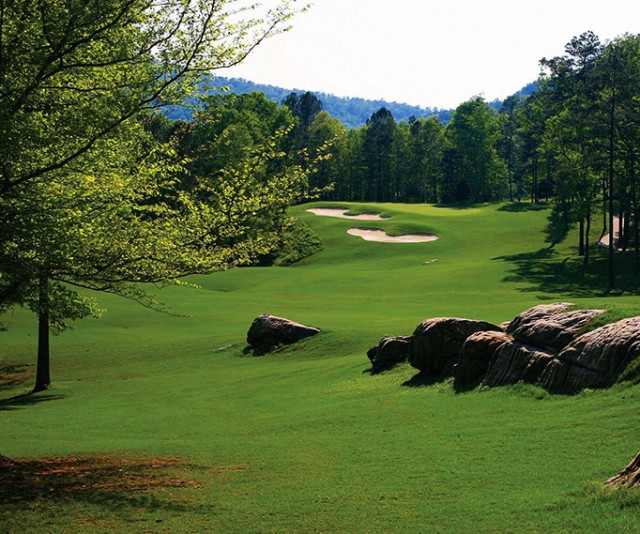 Building golf courses in valleys can be a mixed bag. On one hand they can offer elevated surrounding views and generally some kind of water at the bottom to play against. On the other hand, adequate width may be lacking, holes can be forced into unimaginative out-and-back configurations, low areas are prone to flooding and, given the environmental sensitivities of natural waterways, those lakes and streams might be off limits to golf holes.

Limestone Springs, 30 minutes northeast of Birmingham, touches on all these elements. Designed by Alabama native Jerry Pate and set in a narrow valley between Sand and Red Mountains, the holes straddle several creeks beneath a double-sided backdrop of Appalachian foothills. 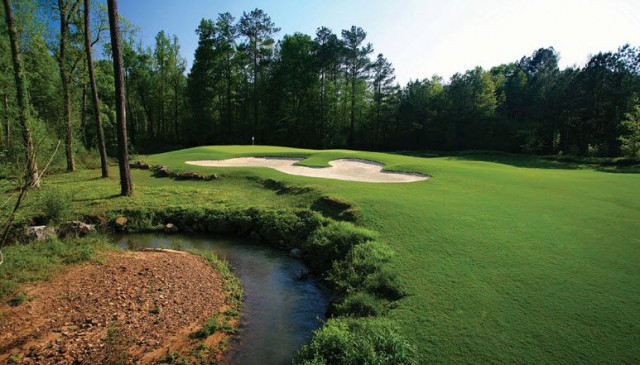 This bow in Crump Branch cuts in near the short par-4 13th green. The excitement of shots played into it would have been greater if the green were located nearer it, where the bunker is currently placed.

The lovely property is almost completely isolated in woods and stretches up and down the valley floor, loading up the two basins at either end with the majority of golf.

Crump Branch and Limestone Springs Branch are beautiful running water assets that enter play on a number of holes, most effectively on two par-5’s, 8 and 11, where the streams cross the fairway through the second-shot landing areas. 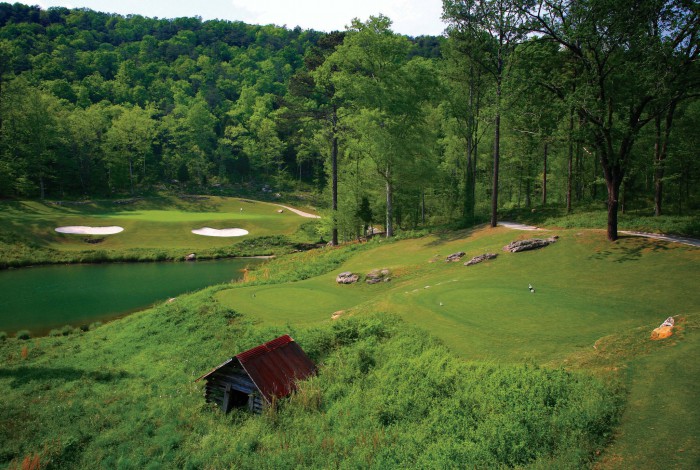 The par-3 7th plays over across of three man-made water features.

Yet its a shame they weren’t used more consistently to greater strategic or emotional impact, nestling closer to where you want to hit your ball rather than lurking where you don’t. That could be due to certain regulations, but the creeks were dammed to create three small lakes, so maybe that wasn’t an issue.

There’s a beautiful run of holes from 11 green through 14, including the scenic par-3 12th near Crump Branch and the 317-yard 13th that demands the green be moved down to a nook behind an elbow in the creek. The bunkering at the par-5 16th is first class, though on some holes, like the 5th, it’s perplexing: I’m pretty sure only a U.S. Open champion would place two bunkers blocking the front landing area of a 220-yard par-3, even if it does play slightly downhill (86).