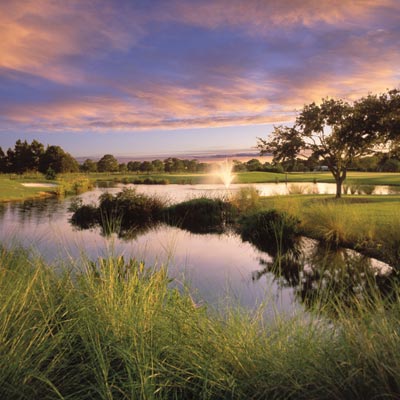 Looking toward the 17th green.

We’ll never know how good this course originally was (for many years an amenity for the historic Belleview Biltmore hotel up the road) because it began to fall into disrepair due to various financial crises shortly after it opened in 1925.

Likely it was never very special—Ross’s topographical map would have been pretty quiet, revealing a simple, flat parcel a few blocks inland from the Gulf of Mexico to be ringed with residences.

The routing, however, was, and remains, a tight, rhythmic drumbeat pushing and switching direction over and over. You have to admire how Ross found such width for the fairways to breathe in such tight confines.

Chip Powell’s interpretive 2001 renovation pumped about as much life as possible into the property all things considered, while still keeping in mind Ross and what we think might have once been here.

New fairway bunkers on stage right and stage left, particularly throughout the second nine, force either heroic or strategic engagement from the driver. The greens are large with not insignificant slope, with thoughtful little wings and knobs placed ideally for their slower speeds, and the once pancake-flat fairways have a little ripple to keep your attention.

Wings and ramps on the green perimeters keep the short game interesting.

It’s really a neat, low-key little place, and one gets the sense that playing here today wouldn’t be that much different than it was way back in the day. (85)

[Note: In 2017 the course was privately purchased from the city and renamed Pelican Golf Club, which it was at one time called. Another comprehensive renovation is planned, headed by Shane Robichaud, a designer with Beau Welling Design, the architectural firm that works with Tiger Woods on his signature designs. Stay tuned.]

Architect: Donald Ross/renovated by Chip Powell in 2001, and Shane Robichaud in 2017