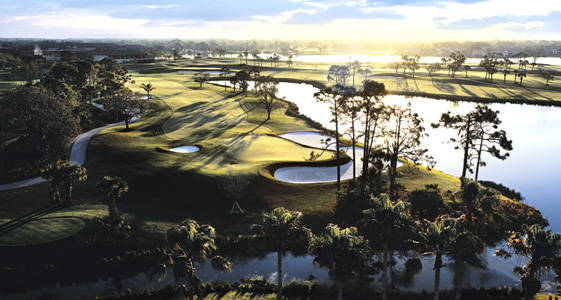 If you want to get a taste of major championship golf in the state of Florida, there’s only one place to go: Palm Beach Gardens.

The Champion Course at PGA National Resort, site of Larry Nelson’s victory in the 1987 PGA Championship, is one of only two courses in the state that have hosted a men’s major championship, and it’s the only one you’re likely to play. The other, the original PGA National where Jack Nicklaus won the ’71 PGA, is located next door (though it’s separated by the Florida Turnpike) is now a private club called BallenIsles.

The Champion was also the venue for the 1983 Ryder Cup matches as well as numerous Senior/Champions Tour major championships and PGA TOUR events, most notably the current Honda Classic (the resort is in year four of a six year contract with the Honda). This makes it not just the most decorated championship venue in Florida, but also one of the most tournament-hardened courses in the country.

The current iteration of PGA National opened in 1981 and included the large and impressive resort as well three original golf courses: the Champion, the Squire and the Haig (which actually opened a year earlier in 1980).

Tom Fazio, then at the very beginning of his solo career, designed all three in the traditional Florida modern style. The courses weave through the resort and adjacent development with most holes touching ponds, lakes or canals. There’s virtually no elevation change on the property, but relief does come in the form of elevated platform green complexes that stand like fortresses over deep basin bunkers. 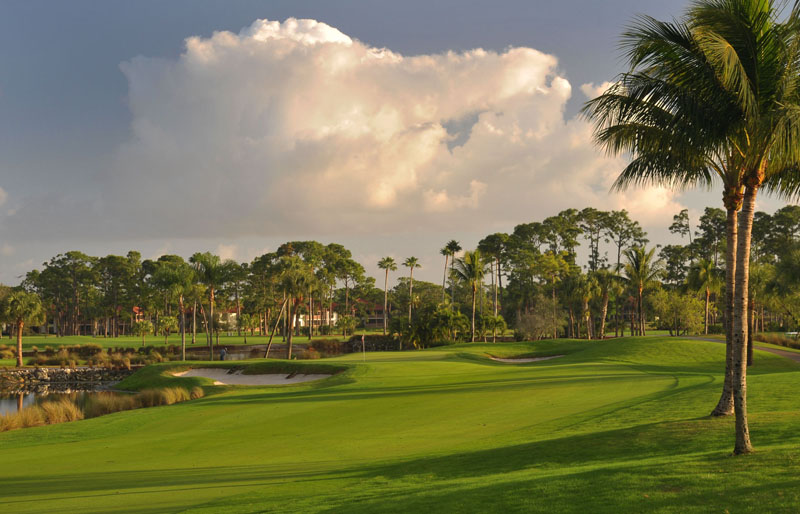 The lovely par 5 sixth is played as a par 4 during the Honda Classic.

That description does no justice to the Champion’s defenses and schematics, which include the seasonal winds that terrorize pros and resort guests alike. The Fazio design was a fairly penal course with narrow targets and convex features that repelled shots. In 1990, Jack Nicklaus significantly revamped the design, making it more accepting and playable for resort guests (he also won the Senior PGA on the redesigned course the following year). He’s returned on several occasions since, most notably in 2002, to adjust the bunkers and greens with the notorious highlight of all his cumulative work the famous “Bear Trap,” a term you’ve undoubtedly heard repeated a sickening number of times during NBC’s Honda Classic telecasts as the announcers gleefully tally how many strokes over par the scores are through holes 15, 16 and 17.

This trio of penultimate holes—a par three, four and three respectively—is indeed difficult, especially when the afternoon wind is up, you’re playing from the tips and there’s money on the line.

But the attention paid to them is disproportionate to their actual merits. Both par threes play over water to difficult targets—15 is a mid-iron shot across a pond; 17 plays more on an angle but to a narrower green—but there’s nothing intrinsically unique about either, especially in the South Florida context where dozens of such holes exist. The Bear Trap is treacherous in high winds, but the character of the holes fail to live up to their name and reputation—especially on a random Tuesday in October or May.

More to the point, extolling the “Bear Trap” takes the emphasis away from where it should be: on the entire course. The Champion’s greatest strength is its relentless consistency. Collectively the holes may not have the creativity or panache of the Stadium Course at TPC Sawgrass, but they aren’t meant to be that. Instead they’re muscular, balanced, fundamental and demand the ability to consistently drive the ball long and hit high approach shots.

As tough as the par threes are—and not just the two in the “Bear Trap” but the long seventh as well—it’s the par fours that are the meat and potatoes of the course. The 16th is just one of the Champion’s many robust and classically structured two-shot holes, in the sense that angles into the greens are rewarded to drives that challenge the fairway bunkers and hazards. 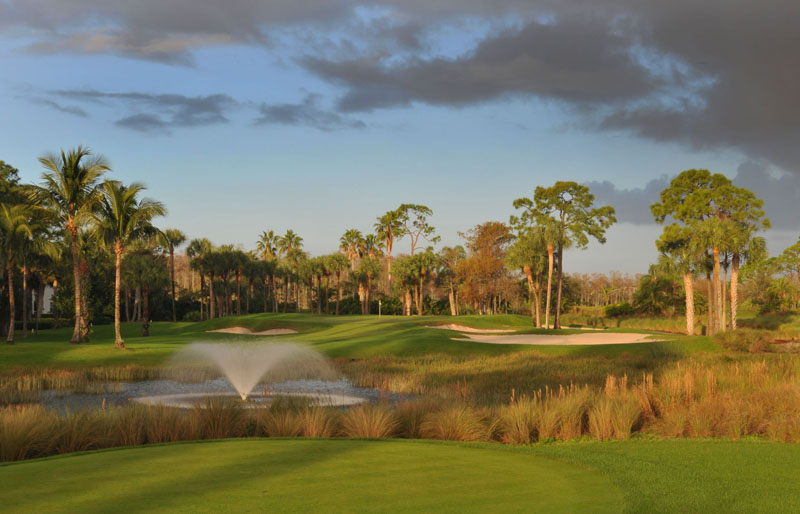 The seventh is every bit the par three as the more famous 15th and 17th.

The fourth, a par four of less than 400 yards, for instance, is clinically designed, asking a right-to-left shot to be placed just beyond a bunker complex followed by a high faded short-iron into a shallow angled green. Eleven, 12 and 13 comprise a trio of diverse par fours, each different in length, shape and presentation.

Arnold Palmer designed the fourth course at PGA National, The General, in 1984. Just over 20 years later his design company came back in for a major overhaul that, like Nicklaus at the Champion in 1990, modernized the course and made it more forgiving to resort guests.

Reopened in 2007 and renamed the Palmer Course, the layout is now fairly wide open from the tee but significant contours have been molded into the fairways and green sites. With uneven lies throughout the course and few flat putts, no shot can now be taken for granted though the penalty for error is less severe than it was in the past. The addition of drought tolerant native vegetation and expansive new waste bunkers that double as environmentally friendly cart paths—in keeping with the resort’s eco-friendly new mantra—have added a rich new visual texture to the golf holes.

PGA National’s three other 18-hole courses—the short and sinewy Squire Course; the classic old-Florida Haig Course; and the pleasant if straightforward Estates Course, designed by Karl Litton in 1984 and purchased by the resort in 1988—remain popular spots for members and guests looking to taste the full panoply of what Southeast Florida golf can offer. 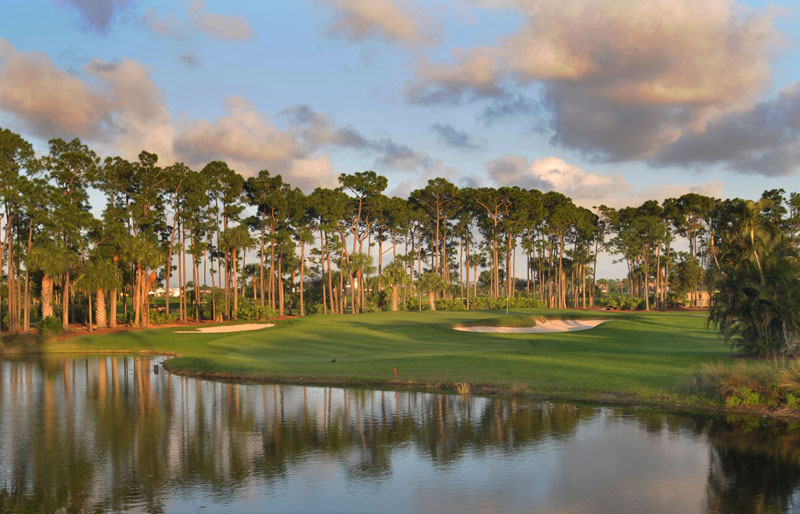 Each of the resort’s 379 smart and corporately-tailored rooms have been remodeled as part of an all encompassing $65 million dollar effort to modernize the property and make it more “green” (which includes installing low-flow toilets, faucets and showerheads, instituting a resort-wide recycling program and using compact fluorescent lights throughout the property). The rooms are spacious with large bathrooms, seating areas and private balconies, and each has been upgraded with new flooring, hi-speed internet connections, new linens, mounted flat screen televisions and marble countertops.

One of the most important transformations has taken place within the lobby and the hotel’s common areas, which open out through floor to ceiling glass walls to a stunning new art deco pool and a 5,000 square foot outdoor pavilion that overlooks the Champion’s 18th hole, a 26-acre lake beyond it, and the WAVE poolside bar.

At one end of the re-imagined marble-floored lobby is the iBAR, a posh open lounge with a four-sided bar made of stone, marble and dark wood. Beyond the iBar is Ironwood Grille with a sleek and modern interior décor that serves new American cuisine with an emphasis on fresh seafood, paired with a robust wine list cellared in full-length glass wine cases in the dining room. New chef Kenny Gilbert of Top Chef Season 7 fame, who came to PGA National from Telluride, Colorado, oversees culinary operations in Ironwood Grill and across the entire resort. 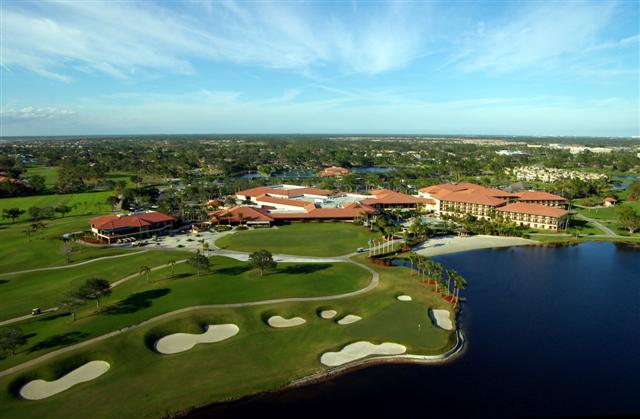