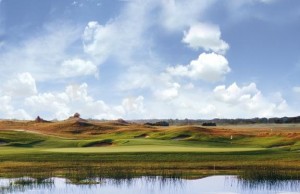 Fescue covered dunes were built to emulate the look of Irish links courses.

characteristics of Scottish and Irish links courses (the accompanying National course exhibits “American” themes). I’m not sure  which links courses exactly, because I can’t think of any off the top of my head where over half the holes wrap around ponds and man-made reservoirs. But once you get beyond that quibble and accept that the International and National themes are just concepts applied to a very typical, flat Florida site, you can begin to appreciate some interesting features and holes.

The courses canvas old agricultural fields and portions of former citrus groves just east of Lake Wales Ridge, though there’s no notable elevation change on the property. The design is actually strongest where it’s not trying to look British—the “fescue”-covered dunes that buffer holes on the first nine are out of place in this setting and holes seven, eight and nine, which circle the large Omni Hotel compound, are tough but comprise an awkward and artificial detour.

Bunkers are tossed and scattered at the International.

Rather, the more spare and uncomplicated holes of the second nine to the northwest–kicked off by 10, pretty much a reverse image of Harbour Town’s 18th–have a more natural links quality. Twelve is a good little par four from the 314-yard tees; 13 and 15 are strong driving holes with massive, rambling fairways that tighten near the green; and 14 is a demanding 230-yard par three guarded quite effectively by a solitary, small bunker in front. Norman also gets points for his minimally presented green complexes with their bare shoulders and slick roll-off zones, and also for innumerable pot bunkers that are scattered about like fistfuls of marbles thrown across a bumpy sand lot. (87)