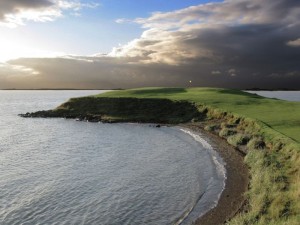 Standing on the par-three 2nd tee at Höfn in East Iceland, the player can literally touch the ocean that guards the left, front and back of the sloping green.

The earliest written reference to golf in Iceland is a simple mention of an Englishman, by the name of Forder, who, in 1912 is said to have knocked the most peculiar little white balls back and forth on the banks of the Laxa River in the north-east quarter of the country, in which the visitor tried his luck angling.

The fact that there were no golf courses in the country at this time did not stop Forder from quenching the thirst he had for playing at least something that resembled golf. The same has since occurred to this day in almost every village along Iceland’s shores. In each instance, there is a story to be told, a story of visionaries, enthusiasts, and lovers of golf who painstakingly prepared any available parcel of land, or one that was particularly suitable, just enough to get the ball rolling.

In cases where satisfactory land could be found, these efforts have stood the test of time. With shallow pockets, armed only with shovels and wheelbarrows, these pioneers did exactly what continues to be the ultimate goal for the modern golf architect. Each and every natural feature was allowed a role in the layout of the course. The unpredictability of nature remained intact and gave each course its own character. 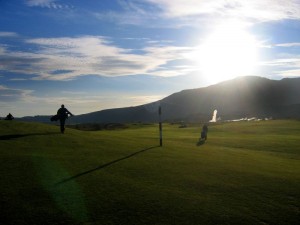 Geysir Golf Course draws its name from the famous neighboring hot spring, The Great Geysir. While playing the 8th and 9th holes, the player is guaranteed to witness at least one eruption.

The advent of heavy machinery had little effect on this, as the short playing season and small population made for a small market, meaning little revenue. Budgets were extremely low. Fortunately, one is tempted to say, as deeper pockets would very likely have resulted in many of the natural quirks and unpredictable landforms being erased, only to be replaced by well meaning, but monotonous efforts to add interest.

The golf boom of the 1990’s, and an increased involvement by local authorities in the development of golf courses, has changed the economy of golf-course construction somewhat. This has placed added pressure on the planners of golf courses in the country to capitalize on this opportunity and increase the quality of Icelandic golf courses.

There are more than sixty golf courses in Iceland, a country with a population of only 300,000. Fourteen of these courses have eighteen holes or more. The others, with only a few exceptions, are nine-holers – many can be found in the most unlikely places, and are of surprisingly high quality. When driving the Ring Road along the coast of the island that is slightly greater in area than Ireland, one feels as if there is a golf course in every village.

The short par-four 4th hole at Kjölur Golf Club demands a bold attempt against the majestic backdrop and over a diagonal water hazard if one is to reach the green in one, a realistic goal for many club golfers when helped by a southwesterly wind.

The length of the playing season in Iceland is different from one region to another. In the south, the richest area in golf courses, golf can be played for solid five months. In mid-summer, the sun barely dips below the horizon. The unusually long daylight hours do, in part, make up for the short and cool summers. The biggest challenge in golf-course upkeep and construction remains the frequently changing temperatures during the winter months. The repeated freezing and thawing cycles are a great threat to plant endurance. Shedding water off the playing surfaces is extremely important in winter. The dramatic temperature changes may cause instant flow of melted snow along the ground, which will then be in danger of freezing again while still moving, forming ice-cover that increases the risk of severe winter kill. Maximising the use of south-facing slopes and green sites in shelter from the cold northerly winds are thoughts that should be contemplated right at the very beginning during the routing stage.

Among the primary reasons for this rugged island – so far out in the North Atlantic Ocean – to be inhabited in the first place, is the abundance of geothermal activity that is extracted from great depths and used for central heating. Hot water is found deep in the earth’s crust, allowing the population access to heating at less expense than if imported fossil fuels were to be used. This gift of nature has long been used for sub-surface heating under driveways, car parks, and streets, inspiring thoughts on using the same technique to improve soil conditions on golf courses. Limited research has been conducted on this subject, but there is sufficient evidence to suggest that soil warming can extend the playing season and dramatically improve turf quality in cold climates. It may be true, in this instance, that digging deep enough will indeed bring results.