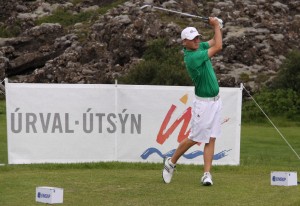 Ólafur Loftsson in competition in his native Iceland. Photo courtesy of The Golf Union of Iceland.

23-year old Olafur Loftsson, an amateur golfer from Iceland, has his countrymen on the edge of their seats after securing a spot in The Wyndham Championship on The PGA Tour, starting Thursday in Greensboro, after winning the Cardinal Amateur with a career-topping performance on Sunday.

Olafur’s showing at Sedgefield among some of the world’s best players will be a first for the North Atlantic island with a population of only 320 thousand, ten percent of which play golf five times or more each year. Ólafur’s native country sports an amazing total of almost seventy courses, most of which are scenic and natural nine-hole layouts scattered along Iceland’s meandering coastline framing an island slightly larger than Ireland.

Ólafur, who is now entering his senior year at UNC Charlotte, outplayed a strong field of amateurs at The Cardinal Golf & Country Club in Greensboro last weekend, finishing 54 holes at eleven under par and winning by four strokes after a final round 65.

Golfing World TV recently visited Ólafur in his home country and saw him practice in the flaming red midnight sun that gives thousands of Icelanders the privilege of enjoying even a full game after work and dinner on weekdays – lifting the number of available playing days for the working men and women to that of a full year in the warmest of climates.