They’re both rural, and it takes some getting to get there. One’s in Sam Snead territory, the other near Andy Griffith’s home town. But there’s nothing aw shucks about either The Homestead or Primland resorts, where the golf is great and yet only scratches the surface of things to do. Primland is the new kid on the block, that block being just north of Mount Airy, North Carolina, Andy Griffith’s hometown, about 20 minutes up the Donna Fargo Highway. The 12,000 Blue Ridge Mountain acres make the resort just a wee bit smaller than all of Bermuda.

Primland has been a wilderness retreat and hunting reserve for decades and remains so, with added ATV tours through the wild terrain, horseback riding, trail hikes, mountain biking and the increasingly popular tree climbing. But now there’s a luxurious new 26-room and suite lodge complete with an observatory for those who like to rough it in high style.

In 2006 the Donald Steel-designed Highland Course at Primland opened and immediately left visitors agog. Running along a ridge of the mountains, the course presents a constant feast for the eyes, and a rollercoaster of thrills during play.

Accurate driving is a near necessity here, what with the frequent possibility of stray shots sailing into oblivion or off the side of a cliff. Even from the regular men’s tees of 6,450 yards the par-72 course is rated 71.9/140. Yet it’s probably one of the most enjoyable difficult courses I’ve ever played.

Rounds here still clock in at well under 10,000 a year, so the feeling of splendid isolation out on the course adds to the pleasure, although this kind of publicity might not help. Now in its fifth full season, the course has just shot up the ladder on various “Best of” lists, including thirteenth on the new Golf Digest best U.S. public courses roster. 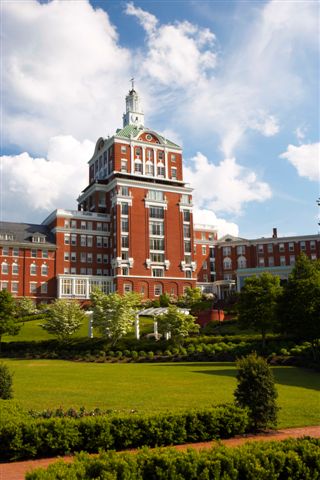 The Homestead is the more venerable of the two properties, having been established ten years before the American revolution. It wears its history proudly–22 U.S. Presidents have visited or stayed at the Hot Springs property–but not heavily. Its grandly appointed Tower was completely renovated in 2010, and the entire resort is open and bright.

With 483 guests rooms and suites and 3,000 acres for the plethora of activities available (from fly-fishing to clay shooting to dipping in the historic Jefferson Pools…), the resort may seem teeming in comparison.

But it’s also teeming in golf courses. President McKinley teed it up here in 1899, making him the first sitting President to play golf (a neat trick). And he did from the first tee of the Old Course, which dates from 1892 and is said to be the nation’s oldest tee in continuous use. The course began as a six-hole track, was expanded to 18 by Donald Ross and updated in 1994 by Rees Jones. The Lower Cascades Course was established by Rees’ father, Robert Trent Jones in 1963.

The Cascades Course is the jewel in the crown, a William S. Flynn 1923 design that follows the natural mounding of the Allegheny Mountains for 6,679 yards through tight fairways, speedy greens, with great mountain views, all to a par-70, another Virginia joyride.

Washington, Jefferson and Madison may not have played here, but it’s where golf royalty, Sam Snead, cut his teeth. Part of the charm for the visiting golfer here is that everyone from the area has a Sam Snead story and is happy to tell it–including his nephew J.C. Snead, the former PGA Tour player who still lives in town.

J.C. says he’s not prejudiced, but he thinks the par-3s at the Cascades Course are the finest anywhere. And that’s good, because there are five of them. The Cascades Course at The Homestead, Hole 12

More on Snead:
Glory Days
Happy 100th, Sam Snead
Swing Into the Past at Oakhurst Links