It may be a function of growing older, or simply wading into the wrong streams of literature, that I find myself these days rarely refreshed by one of life’s great pleasures: reading a book that makes you laugh out loud. 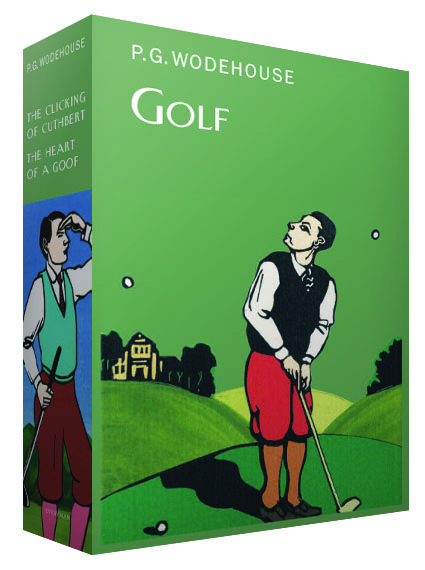 The Overlook Press has come to the rescue in splendid fashion, by putting two of P.G. Wodehouse’s collections of golf stories into a boxed set, simply called Golf and charging a mere $37.50 for it. If calculated at even a nickel per guffaw, this is still the bargain of the century.

Or last century, which is when Wodehouse (1881-1975) labored on his many comic works. Perhaps best known for his various tales of the buffoonish Bertie Wooster, who has to rely on his sagacious butler Jeeves to extricate him from endless entanglements, Wodehouse was a fairly prodigious scribbler.

Along with any number of plays, musical comedies and film scripts, he produced close to 100 books—novels and short story collections—and Overlook, along with Everyman’s Library of London, started in 2000 to republish every one of them. That work is now complete, 99 handsome volumes in the Collector’s Wodehouse in all (with spot-on jacket art by Andrzej Klimowski), for roughly $1,200 for those after the entire set.

(In a felicity that Wodehouse would surely have appreciated, the Overlook Press is located in New York City on Wooster Street.)

There are other golf tales scattered throughout the larger collection, but the two volumes here include 19 stories, many of them narrated by that Sage of the veranda, the Oldest Member, who has seen it all and intends to tell some hapless member wandering by every word of it. The readers are the richer for it.

Wodehouse’s clear love for the game, and his understanding of it in human terms, combine with his intricacies of plot and felicities of language to produce sublime little comedies of golf obsession, thwarted romances, dubious wagers, all a pure joy to read while everything somehow works out just dandy in the end. 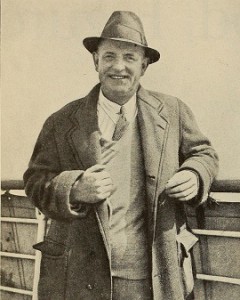 In the second volume, The Heart of a Goof, originally published in 1926 (and then in the U.S. as Divots), Wodehouse complained in a preface that some critics of his first, The Clicking of Cuthbert (1922, in the U.S. as Golf Without Tears) didn’t seem to know much about golf: “… one actually stated in cold print that he didn’t know what a niblick was.”

Wodehouse went on to suggest that only golfing peers should be allowed to review the books, and that they should append their handicaps in brackets so the sting of the critiques, “will be sensibly diminished by the figures (36) at the bottom of the paragraph.”

When he permanently moved to the U.S. from Great Britain after World War II, Wodehouse (18) set up shop on eastern Long Island, where he was known to frequently work on his handicap at the National Golf Links.

Though he lived longer in the U.S. than the U.K., his stories are invariably set in a benign English universe that bespeaks of a simpler time, and all his characters have to overcome are those difficulties in love and an untoward hitch in one’s downswing. Readers should have no difficulties at all, and are highly likely to laugh aloud. 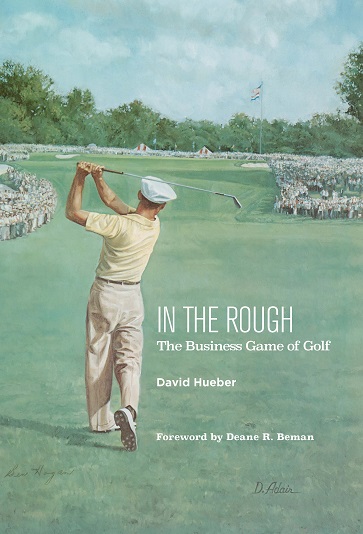 I read David Hueber’s book, In the Rough: The Business Game of Golf (TCU Press, $32.50) after luxuriating in the Wodehouse works, which is surely unfair to Mr. Hueber.

But other than declaring that this volume is not the bargain of any century (pricey even for a paperback with flaps), I’ll tip my cap to Hueber for being able to spin some decent tales too, with the distinctive difference that his are nonfiction.

Hueber grew up in the golf business, his father a club pro in Indiana. He started out as a caddie, if an indifferent one, more eager to play than loop. And he played well enough to earn a college golf scholarship, if not well enough to make it on tour.

But the stories that Hueber relates grew out of the business side of golf, as he went to work in marketing for the PGA Tour in the Deane Beman days, before moving on to the National Golf Foundation as president and CEO. He segued into the president and CEO position of the Ben Hogan Company when it was owned by Cosmo World, the Japanese company which, for a time, owned Pebble Beach.

So there are a lot of fascinating backstage stories here with historical insight, obviously following Hueber’s working time-line. There are closeups of Beman (who contributes a forward); the men behind the equipment names—Karsten Solheim (Ping), Ely Callaway Jr., Gary Adams (TaylorMade), Tom Crow (Cobra); Mark McCormack; Jack Nicklaus and, most particularly, Hogan—including the famous Secret.

The book begins with a poignant scene of Hueber and Hogan getting quietly smashed at the Shady Oaks Country Club in the fall of 1992, shortly after the sale of the Ben Hogan Golf Company. Hueber’s respect and admiration for the golfing legend runs throughout the book and the feelings must have run both ways, as Hueber served as a pallbearer at Hogan’s funeral in 1997.

If not exactly a tell-all book, Hueber is fairly clear-eyed and self-deprecating when he needs to be. It was while under his leadership that the NGF came up with its now infamous Build-a-Course-a-Day from 1990 to 2000 strategy, which seemed like a good idea at the time, and for a time, was.

But when, in his sixties, Hueber went back to school to earn a PhD in sustainable golf course development, his research actually revealed that those courses—many too hard to play and too costly to maintain—actually contributed to the decline in golfers and rounds played. 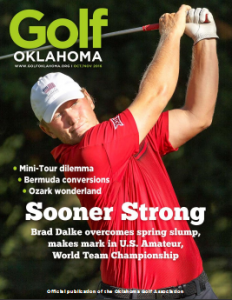 Hueber comes clean: “In retrospect, we were wrong… that demand for the game is supply driven… [but] I can assure you the road to our current situation was paved with good intentions.”

There are plenty of good stories in this account, and if they don’t have you laughing out loud, settle for a few broad grins and nods of recognition.

This piece originally appeared in the October-November 2016 issue of Golf Oklahoma magazine, in slightly different form.