[Nov. 8, 2010]–August 1 is Yorkshire Day in England, a day to celebrate all things Yorkshire. The Samuel Smith Old Brewery in Tadcaster both qualifies for and certifies the day, by releasing its Yorkshire Stingo on August 1, after the beer has been brewed and matured for a year in the company’s century-old (if occasionally repaired) oak casks.

Fewer than 2,000 cases of the 2009 vintage made it across the pond, landing in shops by late August or early September, but bottles sometimes linger through to spring, and certainly the beer is worth looking for.

Another thing Yorkshire was beer bard Michael Jackson, who had something of a special relationship with the brewery. One of his first regular tipples was Samuel Smith, back when Jackson began his newspaper career as a 16-year-old reporter in the ‘50s.

It was Jackson’s ground-breaking World Guide to Beer in 1977 that gave Charles Finkel, founder of Merchant du Vin in 1978 (the U.S. importer of the Samuel Smith portfolio) the idea to have the brewery revive some fading beer styles, beginning with an oatmeal stout in 1980.

According to beer writer Stan Hieronymus, Finkel had come across an old label for such a beer and asked Jackson what it would have tasted like. Finkel told Hieronymus, “He didn’t know. He’d never tasted one.” But Jackson puzzled out some educated guesses and then Finkel went back to the brewery to see what they could come up with. 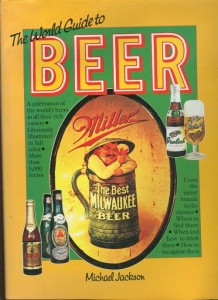 Hieronymus, a sort of amanuensis to Jackson later in his career, unearthed a 1990 quote from Jackson about Samuel Smith’s reaction to Finkel: “They said, ‘Well don’t be ridiculous–nobody has made oatmeal stout for years, nobody remembers how to make it, nobody in America would even consider drinking it. They all drink Schlitz out there anyway.’” 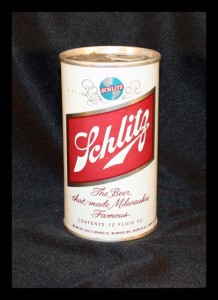 Nonetheless, they made an oatmeal stout, and for many curious but naïve beer drinkers back then, like me, this was a first time encounter, as was the Smith Taddy Porter, or the Smith Imperial Stout. It’s hard to believe now, so common are these styles, but so it was. And I have to admit that I’m pretty sure I was still drinking Schlitz in 1980!

Styles often crop up as a topic in beer blogs like Stan’s Appellation Beer, Martyn Cornell’s Zythophile or others. Indeed, Cornell recently took up the whole notion of beer styles being largely the late Jackson’s doing.

Jackson also alerted the world to brewing styles–such as the Yorkshire stone squares still used by Samuel Smith and, it would appear, now only by Samuel Smith. The system is basically open fermentation in square slate vessels, in which slow-acting yeast is frequently skimmed off and stirred back into the fermenting wort. 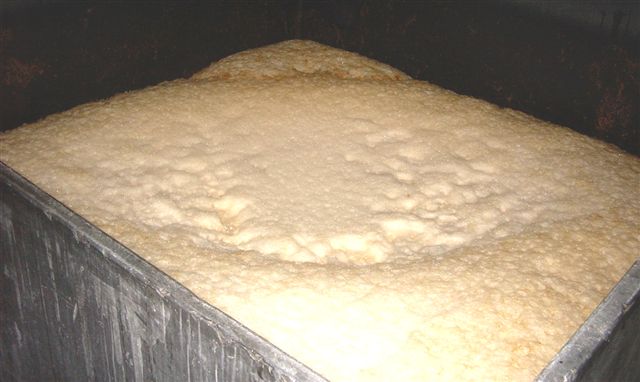 This year’s offering was bottled at 9% ABV, but it’s a bottle-conditioned beer that should ferment out a bit more over time, which won’t hurt it. The ideal approach would be to store a few (or more) bottles to taste over the next few years. 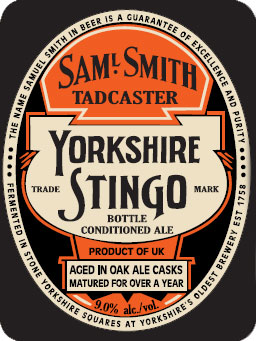 I found the aroma and flavors of the beer shifting around in emphasis in just one night, but then I managed to stretch the drinking of this Victorian pint bottle (550 ml; 18.7 ounces) to three hours–before, right through dinner, and as a post-prandial treat. The Merchant du Vin website recommends pairing Stingo “with beef, wild game, or demanding deeply-flavored foods like pickled fish or strong aromatic cheeses,” but it went pretty well with a meatless wheat pasta with broccoli, walnuts and ricotta cheese.

It has a fruity, spicy nose–apples topped with raisins and brown sugar and a whiff of cinnamon, though there are no spices in it. The entrance is toffee thick and sweet in a pleasing way, but gives way quickly to a tannic teeth-coating, oaky and puckering finish.

All in all it was a nice three hours, and certainly the first good reason I’ve had to look forward to next August.

2 Responses to “TAP Beer of the Week: Yorkshire Stingo”