[July 7, 2022]—There’s an old theatrical saw that goes, “A bad rehearsal means a good play.” If Jared Nelson made a bit of a hash at the beginning of his second round on Thursday’s 36-hole finale of the Vermont Amateur Championship, he put on a sterling show from there on in. When the final curtain came down he was four shots clear of the defending champ, Bryson Richards.

The local favorite son, Brattleboro Country Club Champion Ryan Kohler, led or was tied for the lead through three rounds and was the only player to play all three rounds at his home course under par. The magic faded a bit in the final with a 1-over 72, leaving him two strokes shy of Richards, and six behind Nelson.

It was pretty much a three-man show from the start of the day, with Kohler and Nelson atop the leaderboard at six-under, Richards a stroke behind. Five strokes behind at even par were last year’s Vermont Mid-Amateur Champion Cory Jozefiak and Lucas Politano. Jozefiak would finish in a tie for 11th at eight-over. Playing with Richards, the 15-year-old Politano aptly finished in a tie for 15th.

Max Major posted rounds of 71 and 68 to be the only other player to finish at par or better, two-under in his case. As for the big three, only the order of finish would change by day’s end.

Neither Kohler nor Nelson, playing together in the final group, came out of the gate well in the final round, both having to take drops for unplayable lies and leading to early bogeys. Nelson also flew the green on the third hole and was lucky to get a ruling for an embedded lie to walk off with nothing worse than bogey.

From there on, Kohler played solidly, but couldn’t get many birdie putts to drop. VGA president Steve Currie said so many of Kohler’s putts crept up to the cups to have a look in that they must have then decided the holes were too dark to enter. 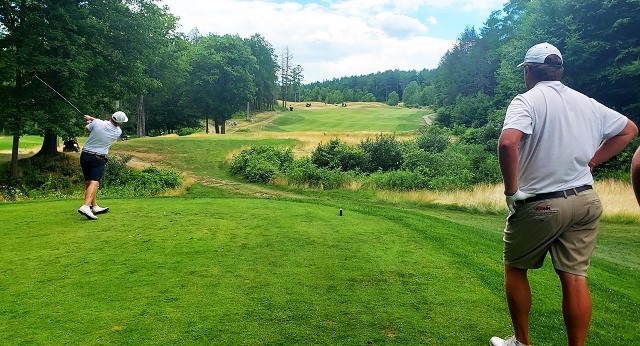 Nelson, on the other hand, turned to prestidigitation, making putts vanish seemingly at will on holes four, six, seven and eight. He was just as relentless on the return trip, dropping five birdies to accompany four pars.

The tournament essentially ended on seventeen, when Kohler flew the green, leading to a bogey, and Nelson threw one of his many darts to within birdie range, which he converted. He had a longer putt on eighteen, and knowing he pretty much had the tournament sewn up, he later said, “I was just trying to stop my hands from shaking and lag it up there. And it happened to go in, a bonus.”

Before they teed off early in the day Nelson and Kohler were asked if they had any prediction for the winning score. Kohler said, “I don’t know—what are you going to shoot, Jared?” The jest turned into reality, but Kohler took it in stride, saying, “I was just trying to stay patient, and I did, but it just didn’t turn in the right direction at the end. But I’m happy with the way I played all week. I just ran into a buzz saw; Jared’s a great player, so congrats to him.” 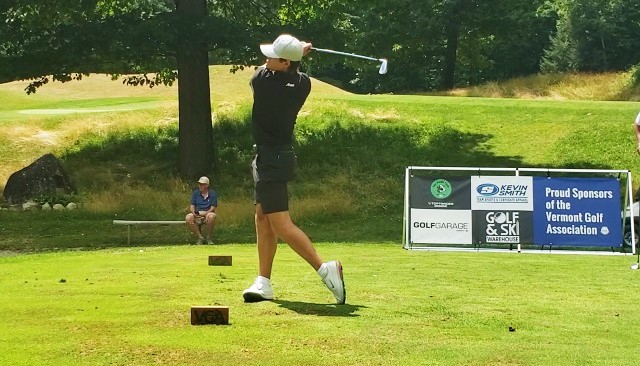 Defending champ Richards, playing in the group ahead of Nelson and Kohler, never figuratively let them out of sight, with two consecutive rounds of 68 on the final day. Richards had owned holes seventeen and eighteen through the opening three rounds, playing them in a combined 5-under. “But I took out the driver on seventeen in the final round and I probably shouldn’t have, winding up in the fescue on the right.” 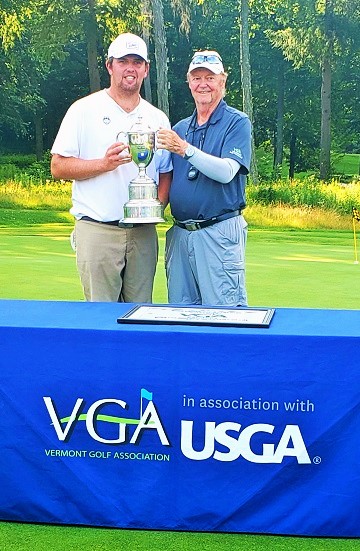 His second shot was wide right and a flop shot toward the hole went a little too far, leading to his sole bogey of the round. Richards and Nelson and are good friends, and if he couldn’t win, Richards said he was happy to see Nelson take the title.

Playing out of Rutland, where his father Greg was long the head professional, Nelson gave a gracious speech in accepting the winning trophy, thanking his father, mother, his support team at Rutland and the hosts at Brattleboro Country Club.

Soon he’ll have another amateur title in his sights, since on June 29 the UConn graduate won a qualifying tournament for an open spot into the U.S. Amateur at the Ridgewood Country Club in New Jersey, beginning on Aug. 15.

Nelson had a suitable curtain line for the occasion: “Yup, it’s been a good summer.”