For some reason medieval times are often equated with romance: knights in shining armor on white horses carrying damsels in distress with flowing blonde hair across moats into looming hilltop castles. But the drawbridge wasn’t always left open, as a visit to grounds of Blarney Castle, near Cork, Ireland, will show. Tourists, for a $15-dollar entry fee starting at 9 am each day, are always welcome to tour the supremely scenic grounds, gardens and castle, but there were times when outsiders were not only unwelcome – they were often tortured and killed.

The first feature at the ruined castle’s front door belies Blarney’s bucolic setting. You now have been warned. But the unsuspecting marauders who battered through the outer door to “call on” chieftain Cormac McCarthy over 600 years ago never looked up above the lobby in time to see the “murder hole” through which they were “greeted” with a deadly shower of boiling oil, stones, and pieces of sharp metal raining down upon them. You are welcome to climb around and safely check out both perspectives of the murder hole these days. 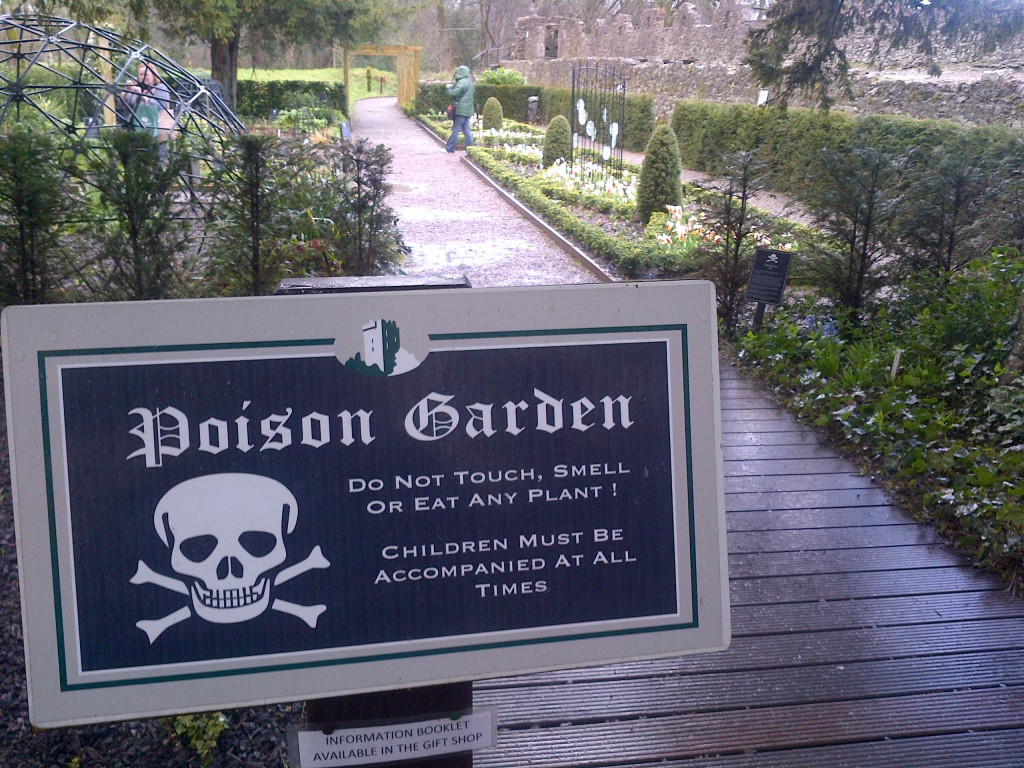 Hellebore, for instance, was served to 18th century children by their parents to cure worms by expelling them…but it sometimes killed them instead. “Harry Potter” readers can get a look at a Mandrake, a narcotic plant that screams when picked. “Breaking Bad” fans will recognize Ricin, a laxative which is absolutely deadly in the tiniest amounts by causing stomach pain, dehydration, and failure of the internal organs within days.

Partiers can pick their poison, too, because Marijuana, Opium Poppies and Juniper (used to make gin but can cause violent purging and stupor, as martini drinkers can attest) are growing in the garden. Wormwood, found in the drink absinthe – the hallucinogenic cocktail dubbed “the green fairy” – is nearby.

Women used Deadly Nightshade berries to beautify themselves because it dilated their pupils, but other side effects included dry mouth, difficulty in swallowing, excessive stimulation of the heart, blurred vision, slurred speech, hallucinations, delirium, convulsions and then death, which made them wide-eyed, but let’s face it, bad company at the ball.

Ever the capitalist, I couldn’t help but wonder why the Blarney tourist attraction managers didn’t build a nice, shaded salad bar patio near the garden!