It is unlikely that France would be mentioned when golfers are asked to nominate their favourite destination away from home.

A recent survey of British, Scandinavian and German golfers, commissioned by Reed Travel Exhibitions, organisers of the International Golf Travel Market, revealed that most popular destination for European golfers was Spain. After that, The Brits favoured Portugal, while the Scandinavians liked German courses and the Germans themselves were happy to take their clubs across the border into Austria.

You would guess the choice is down to a combination of weather, cost and ease of travel.

France didn’t get much of a look in, but things could change in the build up to the Ryder Cup 2018 which will be fought for the first time in France, at Le Golf National, near Paris.

The French persuaded the organising committee to pick them employing a mix of sound common sense and the promise of a great legacy. There would be no need to risk construction of a new courses and its infrastructure, as Le National is well established, home to many a French Open, and well supported by a comprehensive highway network and hotels.

And the legacy offer was most alluring. If all goes to plan the amateur golf scene will get an enormous boost in terms of new courses near to population centres, potentially opening the doors to thousands of new players.

To help pay for the French bid, every registered golfer in the country was asked to donate a small amount in return of a promise the building that the authorities would oversee the building of 100 new urban golf courses. Overall the target is to increase the number of players from 400,000 to 700,000 by 2022.

But what of the existing French courses and the nation’s golfing tradition?

Legend has it that the game was introduced to French courtiers by the teenage Mary Queen of Scots, regarded in folklore as the first woman golfer. Whether this is true or not has never been established, but after the death of her first husband Francis II, the King of France, she returned to Scotland where a true scandal engulfed her.

She had taken her clubs home with her and never missed an opportunity to knock a ball about on the grassy sand hills at St Andrews.

So much so that she was caught playing golf only days after the death of her second husband, Charles Darnley, fuelling theories that she had something to do with his sudden demise.

Whatever the truth, golf was certainly established in France in the Middle Ages, although it was many centuries later before the sport passed to its next level.

By the mid 19th century the Cote d’Azur had become one of the favourite playgrounds of the European aristocracy and the English, in particular, were missing their golf.

Courses began to spring up in the hillsides while the French looked on curiously. It was the beginning a boom that has seen the growth of golf across France which now has more than 650 courses.

As the Ryder Cup announcement was made, it was the glamour resort of Cannes which had spotted a marketing opportunity for golf and launched a campaign to attract tourists to their courses which had been largely the domain of their members.

The area surrounding Cannes, cosmopolitan hotspot of the Cote d’Azur, has a fair number of courses.

Cannes itself makes a perfect base for exploring the region’s golfing offer. It is known worldwide a conference and film festival venue and attracts the rich and famous to its glorious promenade known as la Croisette. It is blessed with a lovely climate, and its culture, foods and wines remain traditionally French as we all like to know it.

Its golfing hinterland is scattered among the hills among with medieval villages that have attracted artists and the wealthy since the area was discovered by an English politician in Victorian times. Most have the feel of “members’ courses” as we like to call them in the UK, yet they are welcoming and friendly and without exception they have clubhouse restaurants to die for.

Course quality varies from the average to the exceptional, with price levels to match. At the top of the tree is the five-star Terre Blanche, which boasts two fabulous courses and a luxurious hotel. Recently the resort was voted European Golf Resort 2013, by the prestigious organisation the International Association of Golf Tour Operators.

Cannes is never going to be a destination for a group of lads ‘on tour’, but is has more than what it takes to attract wealthy families and the retired couples looking for relaxing rounds interspersed with fabulous scenery, sophistication and great food and wine.

This was the first club to open in the South of France, and despite of what has been said of the English influence, it was a Russian who brought the game to Cannes. The club was founded in 1891

by a Russian Duke who was later executed by revolutionaries when he returned to his homeland in 1918.

Formerly Cannes Golf Club, it is the fourth oldest in France. The Harry Colt designed course is relatively short, but the beautiful, ancient umbrella pines that line many of the fairways make precise shot making a must. It features a great novelty – the River Siagne crosses the course requiring players to hop aboard a pontoon ferry to continue their round. An excellent historic clubhouse packed with artefacts completes the scene.

Designed by Cabell Robinson, once a partner of Robert Trent Jones Senior, this is a modern course with generous fairways. Water comes into play frequently, not least at the best hole, the par four 5th. 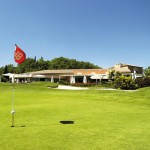 Not the most challenging course in the region, but it offers variety and great views over the garrigue and lovely hillside fortresses villages.

A recent transformation of the back nine has made this a course of distinction. Not the longest but it features an interesting challenge as it weaves through the hills. The occasional large pine tree in the middle of the fairway makes for some interesting decision making. First opened in 1966 it is one of the oldest in the south of France and boasts the on site four star hotel, Le Château de la Bégude, and terrific regional cooking in the clubhouse that overlooks the remains of a Roman aqueduct.

An absolute gem with much of interest and great variety, Robert Trent Jones Junior has created a superb course in as short a time ago since 1993. A stand-out hole here is the 10th, a par three turning away from the clubhouse over water encroaching to the right and a tricky undulating green. Very much recommended. 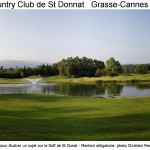 Mougins is one of the top addresses in France so you would expect its golf course to live up to its name and it certainly does. A fabulous 17th century former olive oil mill is home to the clubhouse which overlooks the mature parkland course founded in 1923 by members including the Aga Khan, Prince Pierre of Monaco and Baron Edouard de Rothschild. It was revamped in the 1970s by Peter Allis and Dave Thomas. Home for many years to the Cannes Open, a former European Tour event, its fairways have been trodden by golfing legends including Seve Ballesteros, Greg Norman and Ian Woosnam to name just three. A delightful course. 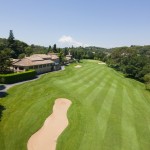 The famous James Bond actor Sean Connery bought a large plot of land in the South of France known as the Domaine de Terre Blanche with visions of creating a five star golf resort.

But the project stalled and the land and its chateau were subsequentially bought by Dietmar Hopp, the hugely wealthy German businessman whose SAP Group sponsors Ernie Els.

Hopp also had visions for a fabulous golf retreat and he managed to fulfil his dream and create a superb resort.

At 266 acres, Terre Blanche is bigger than Monaco, has two fabulous golf courses, an internationally-acclaimed golf academy and performance centre and a sumptuous hotel.

The scenery is ruggedly spectacular and the area is dotted with medieval hill towns with romantic names such as Tourrettes, Mougins and Valbonne.

Hopp has a passion for sport, particularly golf, and a mind set that demands excellence in everything, so it was no surprise that he created two special courses. The project is now in the hands of his son.

Work started in 2000 and was completed four years later when Le Chateau course was opened, followed by its sister, Le Riou.

Designed by Dave Thomas to complement each other, they share quality thanks to detailed attention of the ground staff, yet have different charms. Le Chateau is open to the public, while Le Riou is reserved for members, their guests, and hotel guests.

It did not take long for Terre Blanche to attract the attention of Europe’s most eminent golfing organisation, The European Tour. The resort became a member of the exclusive European Tour Properties Portfolio and is only the third, alongside The London Club and Le Golf National, Paris, to gain European Tour Destination status.

It is also home to the European Tour’s first Performance Institute,

named The Albatros, which was opened in association with the David Leadbetter Academy.

As a result Terre Blanche is the winter training base for the French amateur team, who were the 2010 world champions and the resort hosted the French Riviera Masters in September 2012.

The wide tree-lined fairways of Le Chateau course give the initial impression that this is a fairly easy course, yet you need length off the tee and a good ability to read quick, sloping greens to score well.

It is also fairly undulating, but thankfully the man-made water hazards are generally more scenic than punitive for the average golf swing.

A par five opens the round, but it takes three good hit to reach the first of the huge, sloping greens.

You are soon away from the few properties and out in the countryside enjoying the chirping of the birds and the gorgeous aromas of the wild countryside of the acclaimed Cote d’Azur.

A tight downhill dogleg left marks the start of this testing course, regarded as more of a challenge of your strategy than its slightly longer sister. There are decisions to be made here whatever your handicap but players are rewarded with equally gorgeous surroundings and immaculate green keeping.

A long driveway takes you to the hotel, part of the Leading Hotels of the World group.  Set amid splendid mature gardens featuring pieces from the owner’s extensive art collection you are soon swept up in the understated glamour of the surroundings and it is apparent that this is a seriously top destination.

Guests are accommodated in the 115 suites which cling to the sides of a hill with views over the villages beyond. Each includes a private terrace, living room, bedroom with king-sized bed, large bathroom with tub, separate walk in shower two wash basins.

Transport to and from the suites to reception, spa, clubhouse and restaurants is provided by a fleet of chauffeured golf buggies.

With both Nice and Cannes an easy drive away, Terre Blanche should be on the short list for anybody seeking exclusive, high quality golf and accommodation in one of the most alluring parts of Europe.