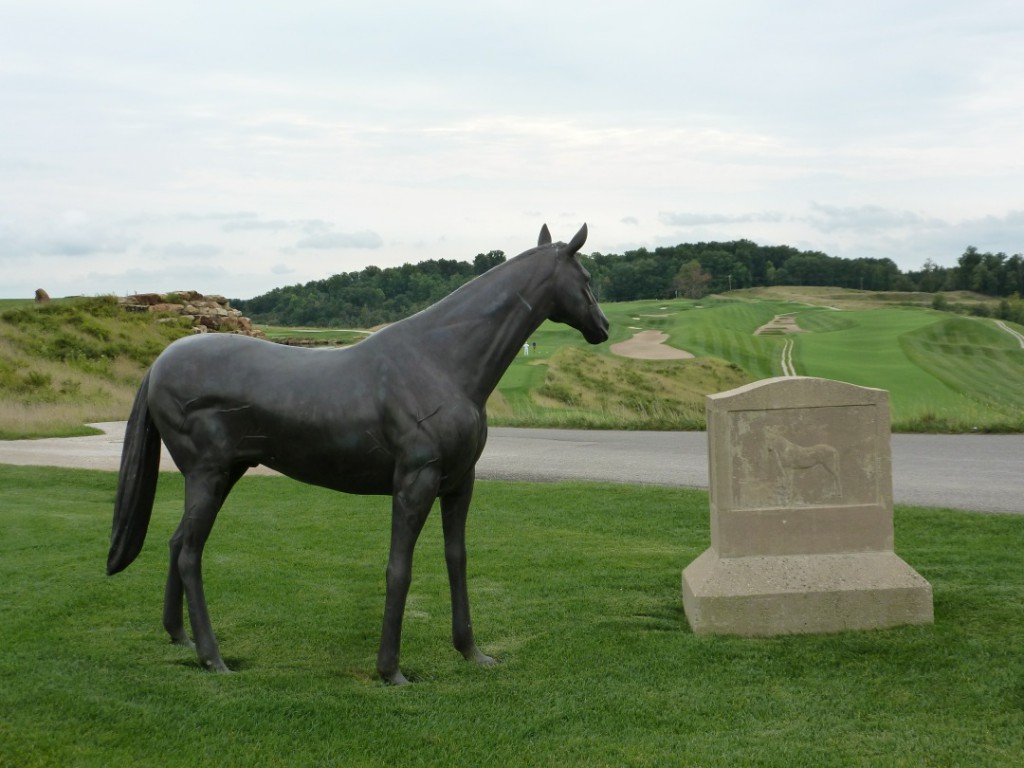 A sculpture of the racehorse, Peter the Great, stands atop the great Pete Dye Course at French Lick Resort

Tom Bendelow conceived the first course (now the nine-hole Valley Links) at French Lick in 1907. Donald Ross delivered his vision in 1917. Pete Dye added his high elevation icing on the cake in 2009. Guests also have playing privileges at Sultan’s Run, about 30 minutes away. You won’t find four more diverse tracts.

The yardage from the back tees is hefty (8102 on the Dye, 7030 on the Ross and 6859 on Sultan’s Run), yet both high and low handicappers have options. For short hitters like me, the forward tees on all three courses never exceed 5200 yards. So even though I’m swinging with my walloping Warrior pals, I’m still playing my own game and having fun. Warriors Wallach and McWilliams are probably still bickering about which tee decks to play. 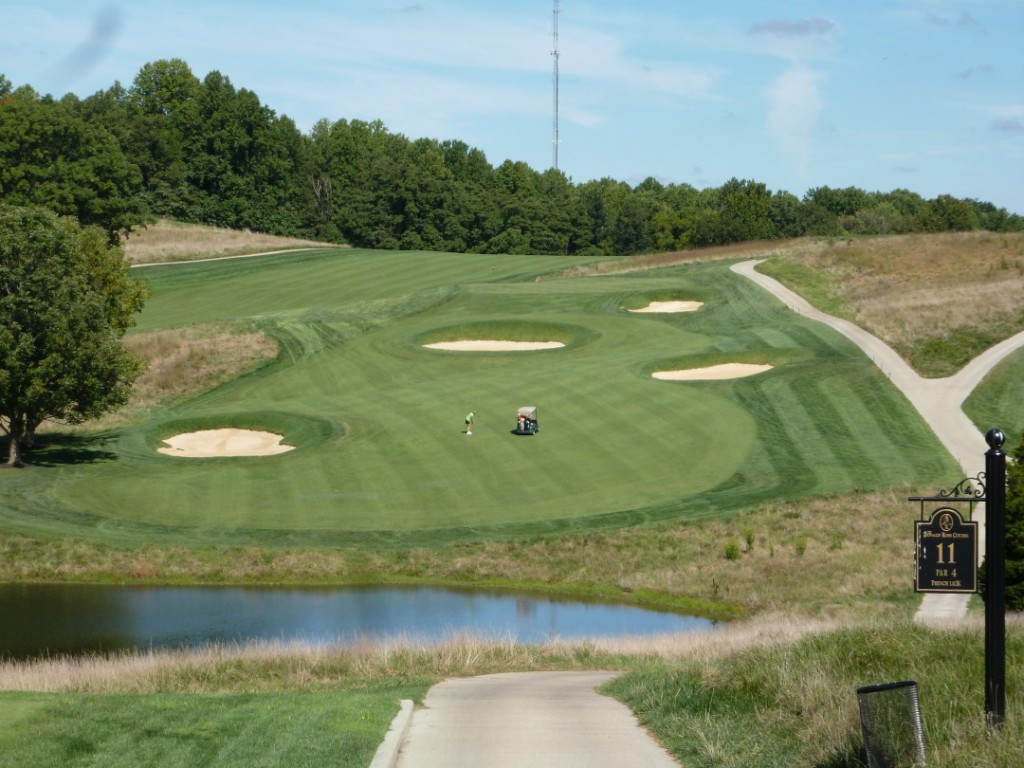 The historic Donald Ross course underwent a $4.6 million restoration that has brought it back to Ross’s original plans. The course was site of the 1924 PGA Championship won by the legendary Walter Hagen and hosted other golf greats and celebrities such as Gene Sarazen and Bing Crosby. 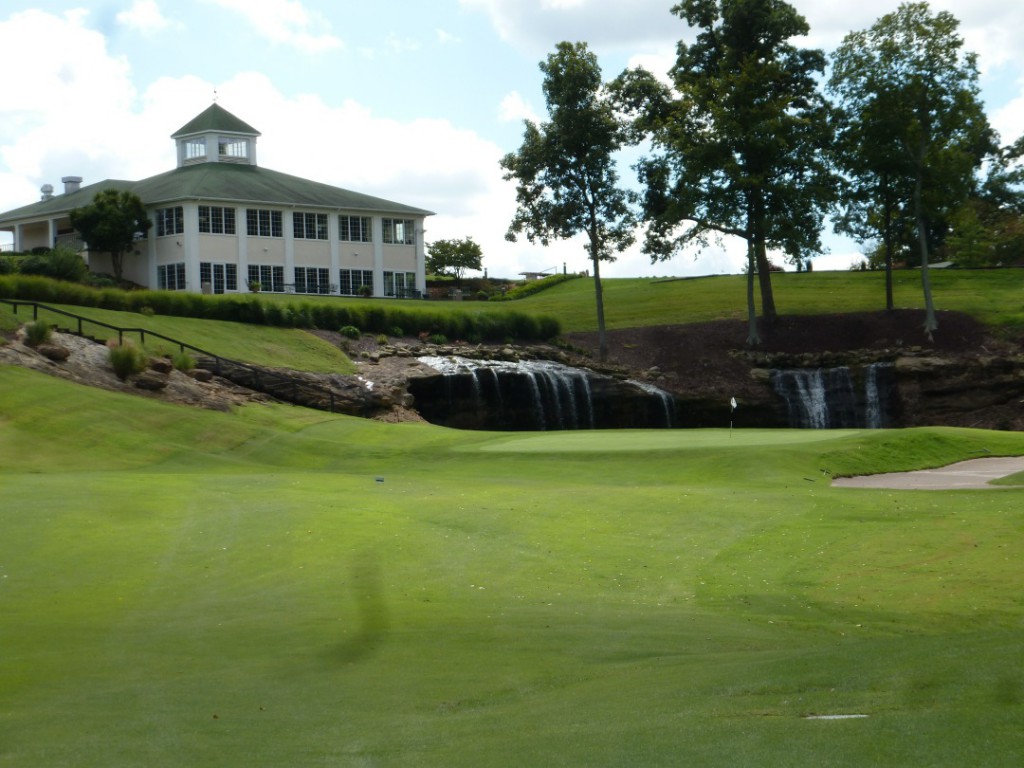 Sultan’s Run ends with a spectacular waterfall on the 18th

Sultan’s Run, named for a stud named Supreme Sultan who sired a number of World Champion American Saddlebred horses, used to gallop and frolic over the hills and valleys that now make up the golf course designed by Pete Dye’s disciple, Tim Liddy. It’s hard to compete with Donald Ross and Pete Dye but Liddy has succeeded in creating a totally different and enjoyable experience with innovative bunkering and lots of water, including a waterfall on the 18th. You won’t find a friendlier bunch of greeters.

The Pete Dye Course, brilliantly carved through a dramatic hilltop, offers theatrical elevation changes, skinny fairways and volcano bunkers. There are spectacular views from every hole, some that stretch for over 40 miles overlooking the Hoosier National Forest.

“I have spent the past five decades designing golf courses all over the world, including courses on great coastal sites,” said Dye. This project brought great excitement to Alice and me because the course is on arguably the best inland site I have ever worked on.”

French Lick is no “old boys club.” In fact, the history of women’s golf here dates back to 1957 where Louise Suggs captured the French Lick Women’s Open on the Ross Course. A couple of years later Betsy Rawls won the LPGA major followed by the legendary Mickey Wright winning the title in 1960.

In September 2013, women’s professional golf returns to French Lick Resort with The Legends Championship held on the Pete Dye Course. Humana Inc., one of America’s leading health and well-being companies, is the presenting partner. Teaming up with Humana reflects a shared commitment by French Lick Resort, the LPGA Legends Championship and Humana to promote healthy living, with a special emphasis on women’s health, nutrition and heart disease. The festivities include the fourth annual Alice Dye Invitational honouring Pete’s wife and partner in golf design, women’s clinics and lots of healthy food.

Pete Dye’s love and admiration for his dear Alice results in tough yet female-friendly challenges. In the words of the master, “I listen to Alice because she played with Babe Zaharias, Sam Snead and Bryon Nelson. Then she plays with three friends who can’t break 90. Every time I build a course she asks how one of those women could play a hole. Makes sense to me.”