If you’re looking for bargain golf read no further. However, for serious swingers Barbados delivers an above-par experience.

The island has seven courses but the Triple Crown includes Sandy Lane, Royal Westmoreland and Apes Hill, all located within minutes of each other on the “platinum west coast” near Hole Town. 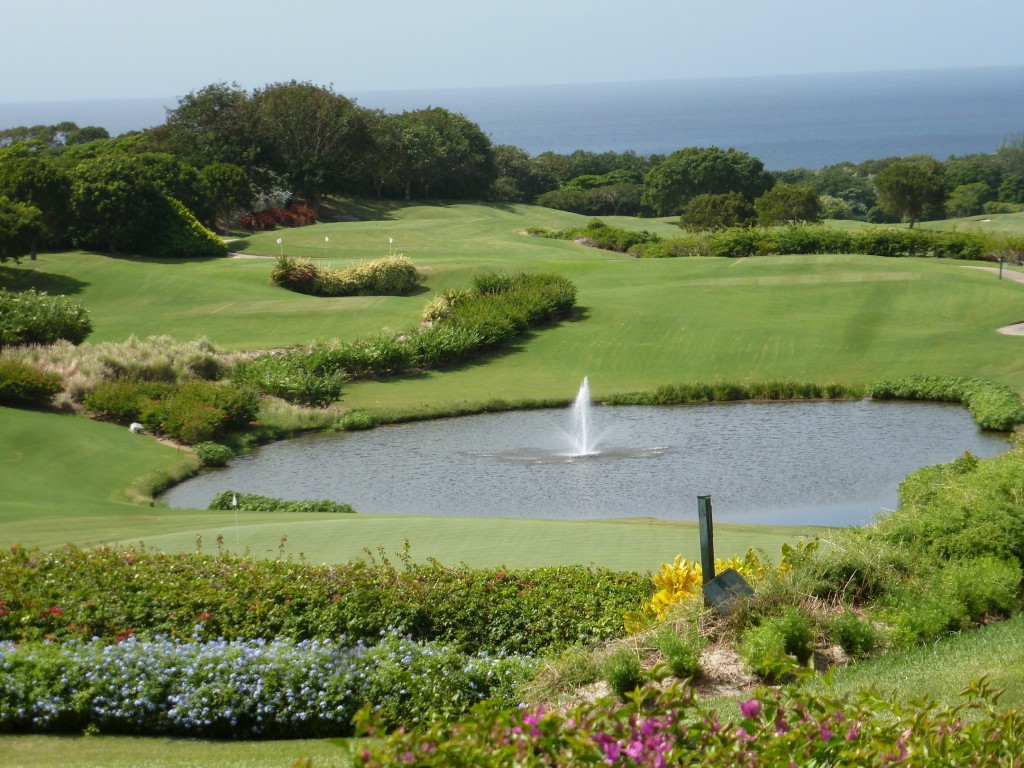 Let’s start with a stroll down Sandy Lane. Warm up on the resort’s first tract, the Old Nine, built in 1961 and nicknamed Tough Augusta. The par-36 course is known for its postage-stamp greens and tight tree-lined fairways.

The 7,060-yard Country Club course is so perfectly manicured you’d swear that the fairways and greens were hand-trimmed nightly with manicure scissors. Home to the 2006 World Match Plan, the par-72 Tom Fazio design incorporates five lakes and grand vistas of the turquoise Caribbean. You could steer the Queen Mary through the ultra wide fairways. This is resort golf so the intention is to make you happy about your game. The scorecard cleverly names each of the five tee blocks: Ability, 7060 yards; Hope, 6542 yards; Humility, 6107 yards; Respect, 5661 yards and Reality, 5089, There’s plenty of room for error and should you happen to luck into a seasoned caddy like Apple, you’ll be amazed at how your putting prowess improves. During my round, the amazing Apple gave me a few solid swing tips and he insisted on teeing up my ball and retrieving it from the hole. I never had to bend down. In fact, I’m quite sure that Apple would have tied my shoelaces if I asked.

Sandy Lane has long been a magnet for the rich and famous. Tiger Woods got married here and Apple caddied for Woods’  (now) ex-wife. It was also a favourite haunt of opera tenor Luciano Pavarotti.

At the risk of sound crass… ladies, if you’re trolling for a sugar daddy you might cast your aspirations down Sandy Lane way where thousand-dollar dinners and magnums of Cristal bubbly are de rigueurand gents are willing to shell out big Bajan bucks for what must be the most expensive round of golf on the planet. The Green Monkey, the third and newest course at Sandy Lane, is a private playground for its owners and their pals. The course is only open to guests and outsiders from 8:30 to 9:30 a.m. each day.  I’d love to brag that I played it but the $4000 green fee for outsiders was a tad rich for my budget. That’s $4,000 U.S. whether you’re a party of one or four. And that doesn’t include lunch. It doesn’t even include Apple! Hotel guests get a “bargain” rate of $390 per player. 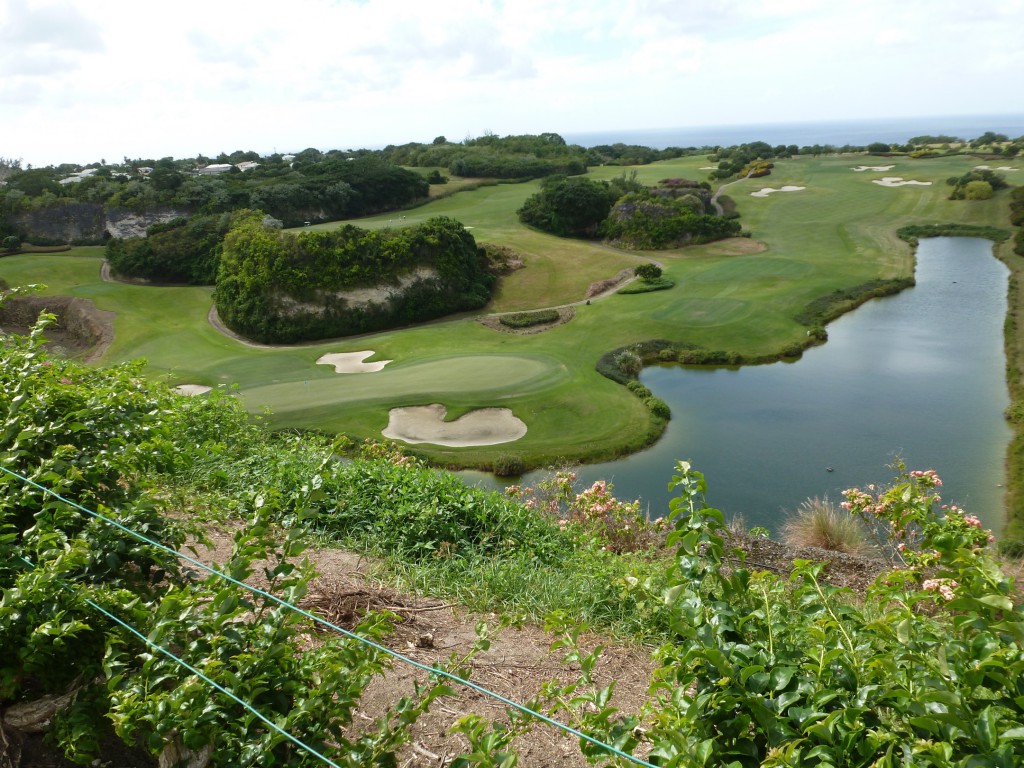 I did manage to finagle a golf cart tour of the Green Monkey with Sandy Lane’s Director of Golf and Players’ Services, Elvis Melford. Five holes play around what was once a coral quarry with dramatic elevation changes. The signature downhill par-three 16thboasts a grass green monkey growing in the greenside bunker and quarry lake. The cheeky green monkeys apparently arrived to the island as stowaways on ships from Africa.  With luck you’ll see them frolicking. 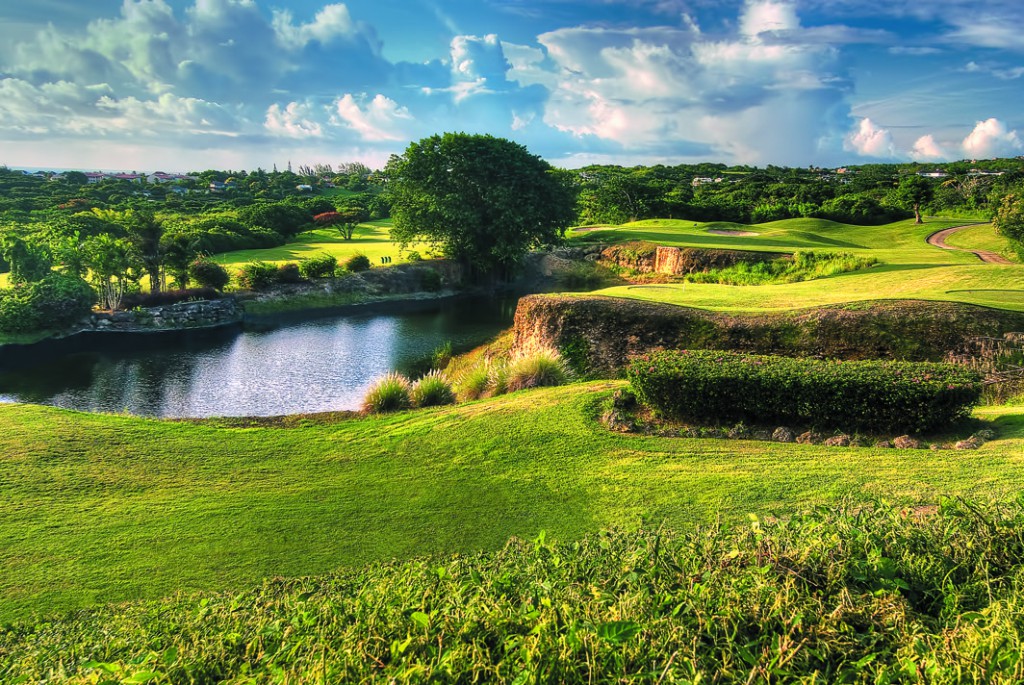 During the 17thand 18thcenturies Barbados was full of sugar plantations. Rum was born here in 1703 when Mount Gay starting putting the amber ambrosia in bottles. Most of the plantations have now been converted into resorts, polo fields, cricket ovals and golf courses.

Royal Westmoreland, before golf architect Robert Trent Jones Jr. left his mark, was part sugar cane plantation and part coral quarry. Westmoreland was one of the first luxury golf and housing developments in Barbados. The course is dotted with grand villas owned by such sports icons as Manchester United’s Wayne Rooney. (You can even rent his villa).

The 6thHermit Hole is named for a character who lived here in a cement mixer. The 8thhonours Bajan cricket legend, Sir Garfield Sobers. Royal Westmoreland doesn’t officially have the royal decree but according to golf director Roger Beale Jr., Welsh golf pro Ian Woosnam declared it to have the best collection of par-threes in the world.

After your round, the open-air pavilion-style clubhouse, with its tasteful mahogany furnishings, is the perfect place to brag about your birdies over a rum punch. 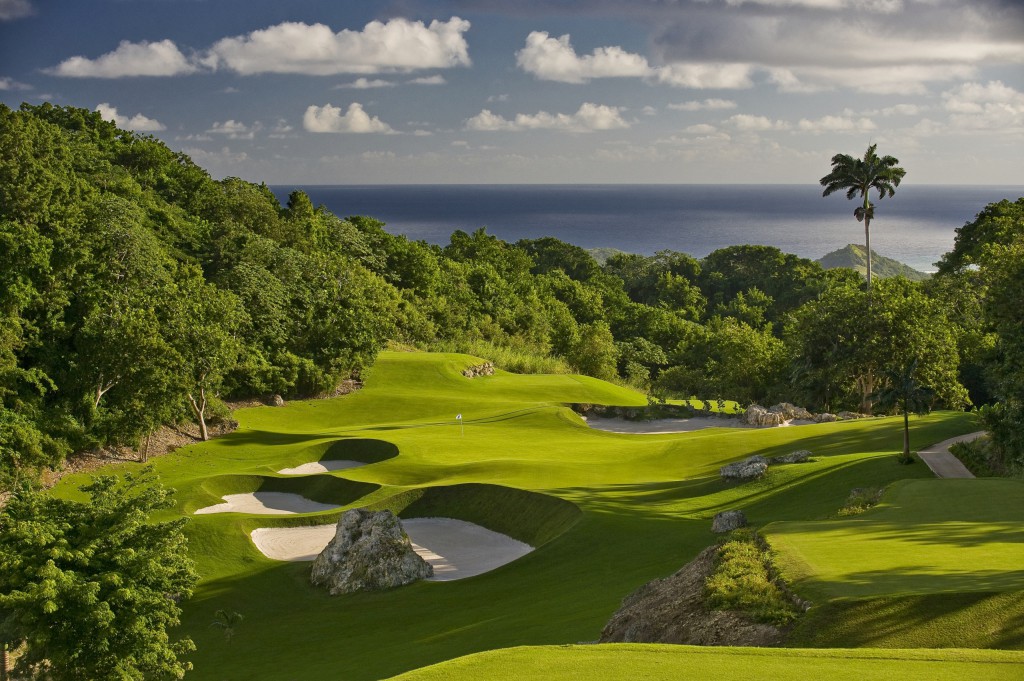 Opened in 2009, Barbados’ newest course, Apes Hill Club, is, in my opinion the best of the lot and certainly the toughest. Sir Charles Williams  who was knighted in 2000 by Queen Elizabeth for his outstanding contributions to Barbados’ development in construction, dairy farming, horticulture, agriculture and sports, developed the former plantation, quarry and dairy farm. Now in his 80s, Sir Charles is also listed in the Guinness Book of Recordsas the planet’s oldest polo player. You might spot polo ponies grazing in the pastures during your round as there are polo fields on the property.

With an elevation of 1,000 feet above sea level, Apes Hill affords amazing views from every fairway. The first 11 holes are carved through dramatic undulating terrain on the west side of the island. From the elevated tees of number 12, golfers have views of the Atlantic Ocean on the east side. Banana plantations, polo paddocks, outcroppings of coral, stately royal palms, natural ponds, green monkeys, lush landscaping and the deepest most daunting bunkers on the island are all part of the Apes Hill experience.

Apes Hill is the only course in Barbados to earn Audubon certification. So hats off to designers Chris Cole and Jeff Potts for creating this environmentally friendly masterpiece.