One of the great stories in the annals of golf is that of Francis Ouimet’s triumph in the 1913 U.S. Open. Playing at the course where he caddied, The Country Club in Brookline, Mass., Ouimet bested two of England’s premiere golfers, Ted Ray and Harry Vardon in an 18-hole playoff. 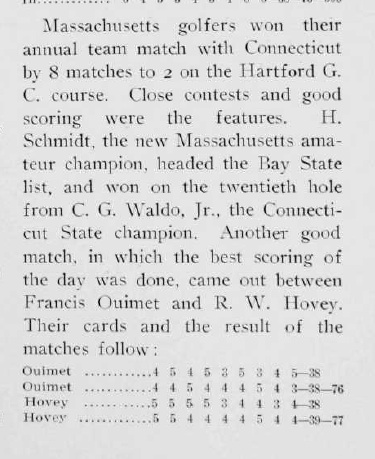 The fact is, by the time he was 16, Ouimet was the the best player on the Brookline High School golf team and known in the Boston area. In one match, he knocked off  William Flynn of Milton High School, who was two years ahead of him. Flynn would go on to be an acclaimed golf course architect.

A year before the U.S. Open, Ouimet was recognized one of the finest amateur players in the Commonwealth of Massachusetts. I stumbled upon a magazine article from a national publication that proves it.

In 1912, when he was 19, Ouimet was part of the four-man team that represented Massachusetts against Connecticut at Hartford Golf Club. Even though the Massachusetts Amateur Champion Heinie Schmidt was part on the squad, it was Ouimet who turned in the best round of the day, shooting a 76 to best R.W. Hovey by one shot, and garnered some press.

Frost, who wrote for the television show “Hill Street Blues” and such movies as The Fantastic Four, in my opinion went overboard in the book by creating Ouimet conversations that never happened in order, I would assume, to inflate the story and make it more glamorous. What sent me over the edge though, was his assertion that J.J. McDermott‘s golf career and life was ruined by his Sunday 36-hole stumble in the ’13 Open. He finished tied for 8th, four strokes back, after leading going into the day.

I asked the late golf historian Bob Labbance if that was true. His answer was something along the lines of, that might have been it or maybe it was because he was involved in a ship collision.”

There was also the fallout of series of disastrous investments McDermott made that  weighed heavily on him.

According to a Golf World article on McDermott written by Bill Shields, “Then, just as his return voyage back to America on the swift Kaiser Wilhelm II was beginning, the ship was struck by a grain carrier in the foggy English Channel. Although the ship suffered a large gash, it made it safely back to land in England. Some passengers, including McDermott, who was in the ship’s barber shop when the collision occurred, were put in lifeboats. Physically, McDermott was OK, but his mind was fragile.

“Everything had hit within a year,” his sister Gertrude explained. “First the stock failure, then the awful results of the Shawnee tournament, then the Open and finally that wreck.”

McDermott downed Vardon and Ray at Shawnee-on-Delaware, Pennsylvania, shortly before the U.S. Open, but was roundly criticized for what was considered excessive bragging about his victory.

Even thought I was close to the end, once I realized the book was more myth than truth, I put it down. I’ve never seen the movie.

It’s too bad that writers like Frost can’t let the facts speak for themselves because the truth can be wonderfully entertaining. I would recommend anyone read the fantastic Stephen R. Lowe’s Sir Walter and Mr. Jones, Walter Hagen, Bobby Jones and the Rise of American Golf,  for such an example.

You can always watch reruns of the TV series Twin Peaks if you want to see any of Frost’s work.