Tumble Brook Country Club in Bloomfield, Conn., has filed for bankruptcy according to a story on the Hartford Courant website that can be accessed by clicking here.

The club, though, may survive, according the the story.

“Club President Brian Newman said Wednesday that 79 of the country club’s members have formed a limited liability corporation, TBCC Investor, to acquire the club’s $8 million of debt from a lender. 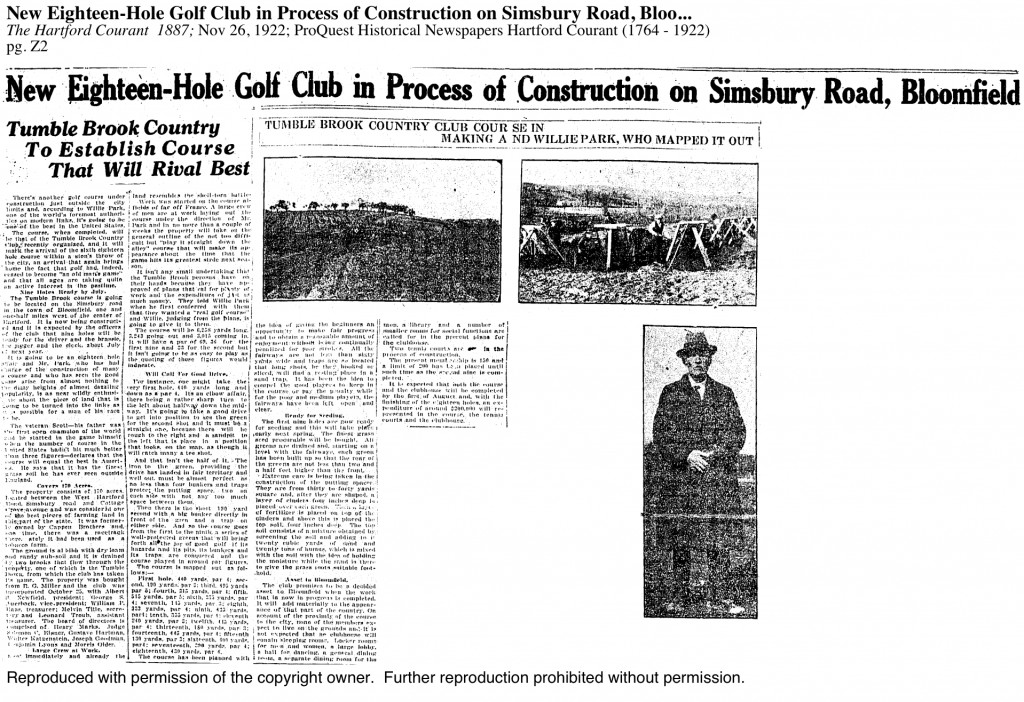 “‘It really puts us in control of our destiny,” Newman said. He said he hoped that Tumble Brook would emerge from bankruptcy by the end of April. “We’re creating a sound financial foundation.'”

For well over a year there have been rumors in Connecticut golf circles that Tumble Brook , which is 27 holes, was in serious financial trouble. The club is one of the three in Bloomfield. Gillette Ridge Golf Club and  Wintonbury Hills Golf Course are public. Two private clubs are located in nearby West Hartford, Hartford Golf Club and Wampanoag Country Club.

The first nine of Tumble Brook was laid out by legendary Scottish architect Willie Park and opened in 1924. According to the club web site, Orrin Smith added nine holes in 1949 and George Fazio designed did the same in 1970. Mark McCumber and Associates renovated the course in the early 2000s.

A Hartford Courant story from 1922 says Park designed 18 holes and even has a rare photo of Park as he worked on the Tumble Brook site. Why the second nine was never built was not explained. The current Tumble Brook routing incorporates the work of all the designers into each nine. The Park holes are by far the best.

For years, there has been talk that the club was mulling the idea of selling nine holes to improve its financial situation.