The architectural history of the Misquamicut Club is a complex one. The existing course is a Donald Ross redesign that opened in the early part of the 1920s. 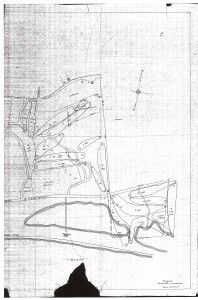 Many others had their hand in the development of the course up to that point.

Until recently, the layout that Walter Travis proposed to the club and which was ultimately rejected, was thought to be lost. It was a few years after Travis moved on that Ross was invited to redo the course.

In 2012, a Misquamicut member visited the Olmsted Archives Collection in Washington D.C. to look for drawings of the plantings the Olmstead firm did for the club. Copies were made of all the pertinent drawings and put on a disc, a copy of which was given to Misquamicut’s Director of Golf Course Operations Bill Morton. While looking over the drawings, Morton realized that within one was the Travis plan.

Travis sent his original drawing to the club in late 1916. As far as Morton knows, it has not been seen since early in 1917 when the club rejected the proposal.

The drawing of the course found in the Olmsted plans is rudimentary and was in all likelihood made by one of Olmsted’s workers and not Travis. It shows no bunkers and greens are indicated by a circle bisected by a line. According to a note in the bottom corner, the original scale was 1 inch=200 feet.

Morton knew from letters that the club has dating back to the Travis submission that Travis reversed the routing of much of the golf course of that time. The 18th hole was then and still is an uphill par-3, Travis had his first tee near that green playing to approximately the location of the existing 10th green. He would then have taken the routing across the road to what is known as the Meadows, separated from Block Island Sound by a sand beach, for holes 2-7. With the Ross plans, holes 11-17 are located there. The tee Travis would have used for the second hole, is the same one Ross utilized for his 11th.

When Travis arrived, the Meadow had golf holes on it but the property did not extend as far east as indicated in the Travis plans. 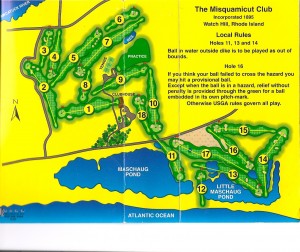 The Travis drawing appears to indicate that he would have filled in part of a pond to extend the second hole and fill in part of another pond for the third, which has an incredibly sharp dogleg right fairway. His eighth hole would have been in the same corridor of what is now the 11th hole, but played in the opposite direction.

The 10th and 11th of the Travis routing were already in place and today are the first and second holes.

It appears from surviving letters that the Travis routing was rebuffed, in part, because the membership did not want to incur the cost of building a number of new greens that Travis called for.

Travis, who visited the Westerly, R.I. site on at least two occasions, was paid $500 for his plans.

“Naturally, it is very exciting to see, for the first time, drawings of a course that Travis envisioned for a spectacular site, and to see how closely his use of the terrain features resembles the layout later done by Donald Ross,” said Ed Homsey, Archivist/Treasurer for the Walter Travis Society.

According to Homsey, Travis was a busy man in 1916. 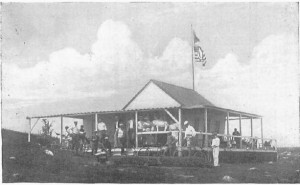 “He did original designs at Garden City CC, Sargowana Golf Club, Orchard Park, East Potomac Park, Roscoe Conklin Park, and redesign at Canoe Brook.  He was traveling to Milwaukee to talk with some folks that about developing a golf course, then on his way back, he stopped at Chicago Golf Club where he consulted with them about improvement of their greens,” Homsey said.

The design history of Misquamicut officially dates  to 1895 but according to the Misquamicut centennial book, golf was played well before the official incorporation.

The first official layout, a nine-hole affair, opened in 1895. It was a  Willie Park, Jr., design. Park taught golf at the club that season. The design was later amended by members, who then expanded it to 18 holes for the 1899 season.

Thomas Bendelow was brought in to update the course and lengthen it from nearly 4,200 yards to over 6,000 yards. His layout formally opened in 1902.

Then, after land was acquired, Seth Raynor built five holes which opened in 1913. There are no records to indicate on what holes Raynor worked, but even 100 years later the 17th has the undeniable attributes of a Raynor Road Hole. Misquamicut is one of Raynor’s earliest jobs.

Along the way a number of member-originated revisions happened until Ross arrived. His design was played for the first time in 1923.