Over 90 years ago Seth Raynor devised a 27-hole course with a concept that may never have been duplicated. Had it been built, the unique setup would have played as two 18-hole layouts that shared nine holes, but not in consecutive order; instead the overlapping came in two groups, one of four hole and the other of five holes. 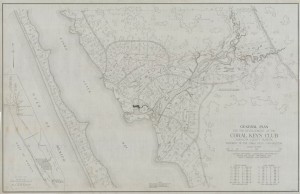 The drawing of the golf holes were done by the Olmsted firm and may not perfectly represent the  intricacies of the Raynor hole designs, such as bunkering. The lengths of the holes and their positioning in regards to the surrounding property would have to have been exact

The Olmsted and Raynor plans were for a project referred to as the West Florida Club in writing but the Coral Keys Club on various plans and in writing. 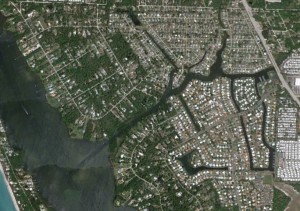 Today the location of the proposed Coral Keys Club.

The project would have been located on the southwest coast of Florida in Englewood, roughly 60 miles south of Sarasota. An aerial photograph from the late 1940s shows roads were built on the land where the development was slated to go but the project appears to have not gone any further than that. Condominiums and homes, but no golf course, are on the site now.

As for the routings, the first four holes on East Course and the South Course were the same.

Then the East Course, an out-and-back layout, runs away from clubhouse for most of holes 5-13, which it does not share with the South. Meanwhile, for its fifth hole, the South Course, which is two returning loops of nine, turns back towards the clubhouse and here is where it gets interesting. The South’s sequence of holes 5-9 are also the 14-18 sequence of holes on the East Course. They play the same yardages and from the same tees for both. While the East Course ends at hole 9/18, the South Course continues on to its own back-nine, holes 10-18, to complete that routing.

The clubhouse of the proposed Coral Keys Club. The 18th hole of the South Course is in the background.

Coral Keys was not the only Raynor find Edwards made recently.

In the Olmsted archives he also dug up a wonderful three-green, nine-hole design that was drawn for Mr. E.C. Shotwell of Enterprise, Fla., ostensibly to be built just for Shotwell. Enterprise is approximately 30 miles northeast of Orlando and on Lake Monroe.

There are two sets of plans, one of which looks to be in Raynor’s hand. It is dated June of 1920. The other drawing is dated Sept. 25, 1920, and was traced by an Olmsted employee, according to notes. Both plans list the length the course can be played as 2,300 yards for nine holes with the shortest hole at 130 yards and the longest at 370 yards. There is no par figure. 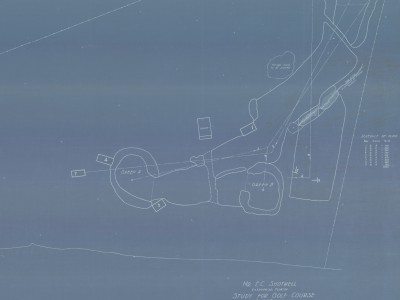 One of Seth Raynor’s drawings for the E.C. Shotwell private course.

Because the greens are designed to approached from a number of angles, the styles are representative of Raynor’s work,  but do not appear to be based on any of the templates, such as the the Redan or Punchbowl. There are forced carries on some approach shots with the run-up option on others. There is substantial bunkering around each green and also at least three fairway bunkers.

Both projects were found by Edwards in the Olmsted Research Guide Online, (ORGO). As the site states, “ORGO’s mission is to provide information about existing records relating to landscape design and planning work of Frederick Law Olmsted, his sons, John Charles Olmsted and Frederick Law Olmsted Junior and the design firms that bear their names.”

The Olmsted Brothers firm had been hired to create landscape design for Coral Keys Club and the Shotwell project. Raynor worked with them on other projects including the Fishers Island Club and the Mountain Lake Club, among many others.